During the period 2007 to 2009, the Norwegian Petroleum Directorate (NPD) acquired 2D and 3D seismic data off Lofoten, Vesterålen and Senja (Nordland VII and Troms II). Some lines also extend into Nordland VI. The seismic data is being sold as one data package. The package consists of data from five different surveys.

The price of the seismic data package is NOK 43,2 million plus VAT, cf. terms of purchase.  The 2D data re-processed in 2012 will be available for buyerswhen the re-processing is completed. The data is available via DISKOS. Administration costs are in addition and will be invoiced by the DISKOS distributor according to the applicable pricelist.

An order is placed by filling out the order form and sending it to the NPD. By signing the order form, the attached terms of purchase are accepted.

The package includes processed seismic data from the following surveys. 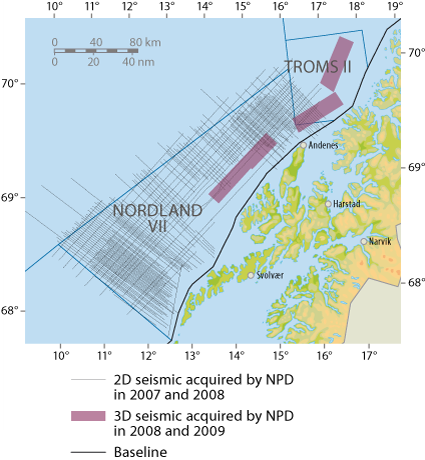