23/04/2009 Press release 22/2009 StatoilHydro Petroleum AS, operator of production licence 309, has completed drilling of wildcat well 30/5-3 S. The well, which has proven gas, is located seven kilometres northwest of the Oseberg C facility in the North Sea.

The primary exploration target for the well was to prove petroleum in Lower Jurassic reservoir rocks (the Statfjord Formation), and the secondary exploration target was to prove petroleum in Middle Jurassic reservoir rocks (the Brent Group). The results from the well show that the Statfjord Formation and the Brent Group were not present.

Gas was, however, proven in Upper Triassic reservoir rocks belonging to the Hegre Group. The gas-bearing zone is approximately 550 metres thick, and contains several layers of sandstone divided by layers of shale. In order to establish the size of the discovery, additional data collection will be required in an appraisal well.

The well was not formation-tested, but extensive data collection and sampling have been carried out.

The licensees in the production licence will consider producing the proven resources from one of the permanent facilities in the Oseberg area should further delimitation show that the discovery is commercially viable.

The well is the first exploration well in production licence 309, awarded in APA 2003. Well 30/5-3 S was drilled to a vertical depth of 3830 metres below sea level, and ended in fine-grained rocks, probably of the Late Triassic Age in the lower part of the Lunde Formation.

The sea depth is 113 metres. The lower parts of the well have been permanently plugged and abandoned, and the rig has started drilling the appraisal well 30/5-3 A from the upper parts of the well bore to explore another part of the prospect in the same production licence. 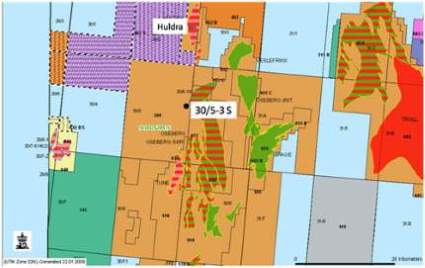