The wells were drilled about one kilometre west of the discovery well 16/1-29 S (Lille Prinsen) in the central part of the North Sea and 200 kilometres west of Stavanger.

The discovery was proven in 2018 in the Zechstein group from the Late Permian period, as well as in the Grid formation from the Eocene. Prior to drilling the appraisal wells, the size of the discovery was between 2.5 and 5.5 million standard cubic metres (Sm3) of recoverable oil.

The primary exploration target for well 16/1-30 S was to delimit the 16/1-29 S oil discovery and to determine the oil/water contact in the outer wedge to the south. The licensees also wanted to investigate the possibility of reservoirs in the Triassic and Jurassic.

The secondary exploration target was to delineate 16/1-6 S Verdandi for a possible oil zone in the Heimdal formation, as well as to investigate the petroleum potential in the Grid formation and to collect data in basement rock.

In the primary exploration target, the well encountered an 18-metre oil column in the Viking group from the Middle to Late Jurassic age, with sandstone layers totalling 2 metres with moderate reservoir quality. The oil/water contact was proven 1919 metres below the sea surface.

The secondary exploration target in the Heimdal formation was not encountered. In the Grid formation, the well encountered an oil column of twelve metres, with one metre of sandstone with moderate reservoir quality. Relatively dense basement rock was encountered.

The objective of well 16/1-30 A was to examine the extent of the carbonate reservoir in the Zechstein group from the Late Permian period, as well as to investigate the possibility of reservoir development in the Triassic and the Jurassic periods.

The well encountered a 15-metre oil column in the Viking group from the Middle to Late Jurassic, with sandstone layers with a total thickness of 6 metres with poor to moderate reservoir quality. Oil was proven down to 1914 metres below the sea surface.

The carbonate reservoir from the Late Permian period was not encountered. Additional volumes in the outer wedge of the 16/1-29 S (Lille Prinsen) oil discovery are estimated at between 0.2 to 1 million standard cubic metres (Sm3) of recoverable oil.

Other segments in 16/1-29 S (Lille Prinsen) will be evaluated, and further delineation of the oil discoveries is being evaluated. The licensees will also assess earlier discoveries within the licence.

These are the seventh and eighth wells in production licence 167. The licence was awarded in the 12th licensing round in 1991.

The wells were drilled by the West Phoenix drilling facility, which will now proceed to production licence 942 in the Norwegian Sea to drill wildcat well 6507/2-5 S, where Equinor Energy AS is the operator. 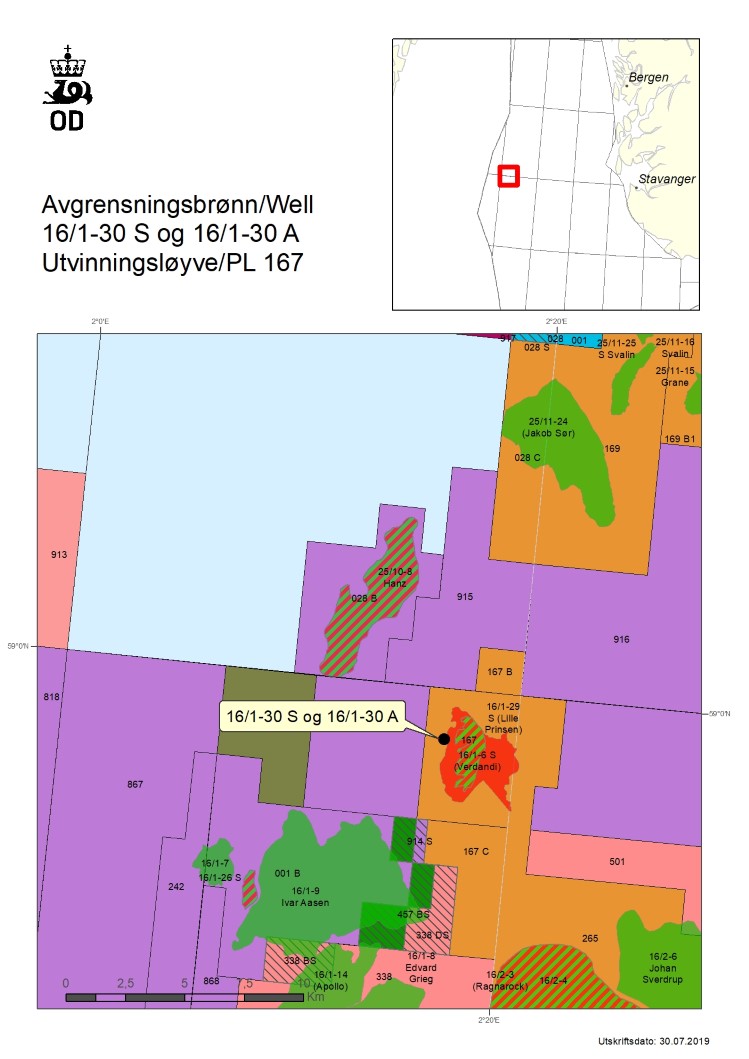