The wells were drilled about 4 kilometres northeast of the Edvard Grieg platform in the central part of the North Sea, 190 kilometres west of Stavanger.

The Edvard Grieg field was proven in reservoir rocks from the Cretaceous, Jurassic and Triassic Ages in 2007, and started production in 2015. Prior to drilling these appraisal wells, the operator had estimated reserves at between 34 and 54 million standard cubic metres (Sm3) of recoverable oil equivalents.

The objective of the wells was to prove oil in conglomerates from the Triassic Age in an extension of the Edvard Grieg basin (16/1-31 S) toward the east and in fractured and porous granitic basement rocks northeast of the field (16/1-31 A).

16/1-31 S encountered an oil column of about 29 metres in conglomerates and conglomeratic sandstone, presumably from the Triassic Age and with generally poor reservoir quality. There is around one metre of sandstone of good quality in the upper part of the reservoir. The oil/water contact was not proven. Pressure measurements show that the reservoir is in communication with the Edvard Grieg field.

Preliminary estimates of the size of the additional resources are between 0.5 and 3.5 million Sm3 recoverable oil and up to 0,35 billion Sm3 gas. The licensees will assess a development to the Edvard Grieg platform.

Several formation tests have been carried out. The production rate from formation test (DST) was 20 Sm3 oil per flow day through a 26/64-inch nozzle opening. The oil is undersaturated with an estimated gas/oil ratio of 125 Sm3/Sm3.

Well 16/1-31 A encountered an oil column of about 62 metres in fractured and weathered basement rock of generally poor reservoir quality. The oil/water contact is estimated at between 1910 and 1912 metres below the sea surface. Small-scale formation tests (mini-DST) show poor to moderate flow properties.

Preliminary estimates of the size of the additional resources are between 0.1 and 2 million Sm3 recoverable oil and up to 0,2 billion Sm3 gas. The licensees will assess a development to the Edvard Grieg platform.

Significant data has been collected and samples have been taken in the two wells. These are exploration wells number 13 and 14 in production licence 338. The licence was awarded in APA 2004.

Wells 16/1-31 S and 16/1-31 A were drilled to respective vertical depths of 2123 and 1977 metres below the sea surface, equivalent to 2195 and 2625 metres measured depth, and were terminated in conglomerate and granitic basement. The wells will be permanently plugged and abandoned. Water depth at the site is 111 metres.

The wells were drilled by the Leiv Eiriksson drilling facility, which will now drill shallow gas pilot wells in production licence 359 in the North Sea, where Lundin Norway AS is the operator. 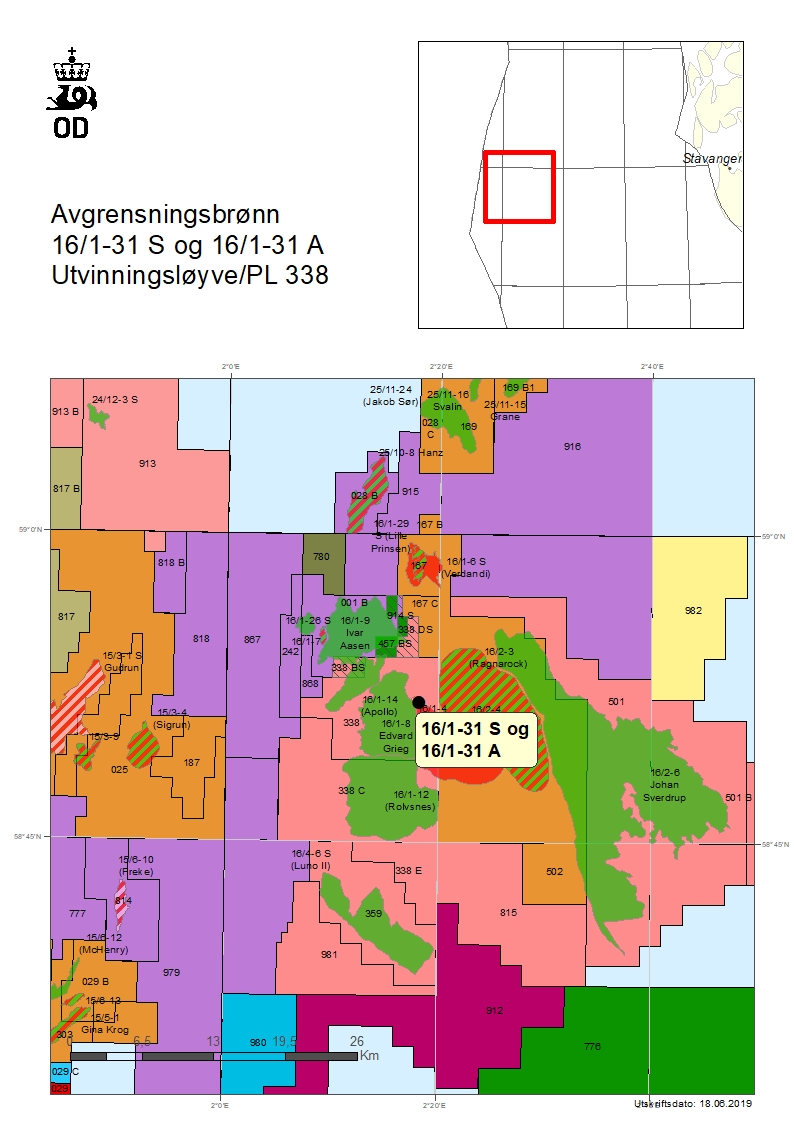