The wells, which are also pilot wells for test production, were drilled diagonally and horizontally, 2 and 3 kilometres northeast and north respectively, from the subsea template on the Bøyla field in the central part of the North Sea, and 225 kilometres west of Stavanger.

The 24/9-12 S (Frosk) oil discovery was proven in reservoir rocks (injectites) in the Eocene (the Intra Hordaland group) in the winter of 2018. Prior to drilling of appraisal well 24/9-15 A, the operator’s resource estimate for the discovery was between 5 and 10 million standard cubic metres (Sm3) of recoverable oil.

The objective of well 24/9-15 S was to prove petroleum and reservoir potential in (injectites) in the Intra Hordaland group. The well encountered a vertical oil column of 49 metres with sandy layers totalling about 10 metres, mainly with very good reservoir properties. The oil/water contact was encountered 1836 metres below the sea surface.

The preliminary size of the discovery is between 0.3 and 1.6 million Sm3 of recoverable oil, and it extends into the neighbouring licence, 869. The licensees will continue to assess the discovery together with other nearby discoveries, with regard to follow-up and a potential development.

The objective of well 24/9-15 A was to delimit the northern part of the 24/9-12 S (Frosk) oil discovery. The well encountered oil-bearing injectite zones totalling 50 metres with very good to extremely good reservoir properties in the Hordaland group. The oil/water contact was not encountered.

The result of the delineation of the 24/9-12 S (Frosk) oil discovery is presumed to lie within the resource range estimated earlier. The plan is to carry out test production from bilateral wells in the Frosk reservoir starting in the third quarter of 2019 and with an initial duration of six months.

The production will take place via the subsea template on the Bøyla field and will be transported 26 kilometres north to the Alvheim production vessel (FPSO). The primary objective of the test production is to reduce the risk associated with recovering these resources.

The wells were not formation-tested, but data has been collected.

These were the seventh and eighth exploration wells in production licence 340. The licence was awarded in APA 2004.

Water depth at the site is 119 metres. The wells have been permanently plugged and abandoned.

Wells 24/9-15 S and 24/9-15 A were drilled by the Scarabeo 8 drilling facility, which will now drill a production well on the Marulk field in production licence 122 in the Norwegian Sea, where Vår Energi AS is the operator. 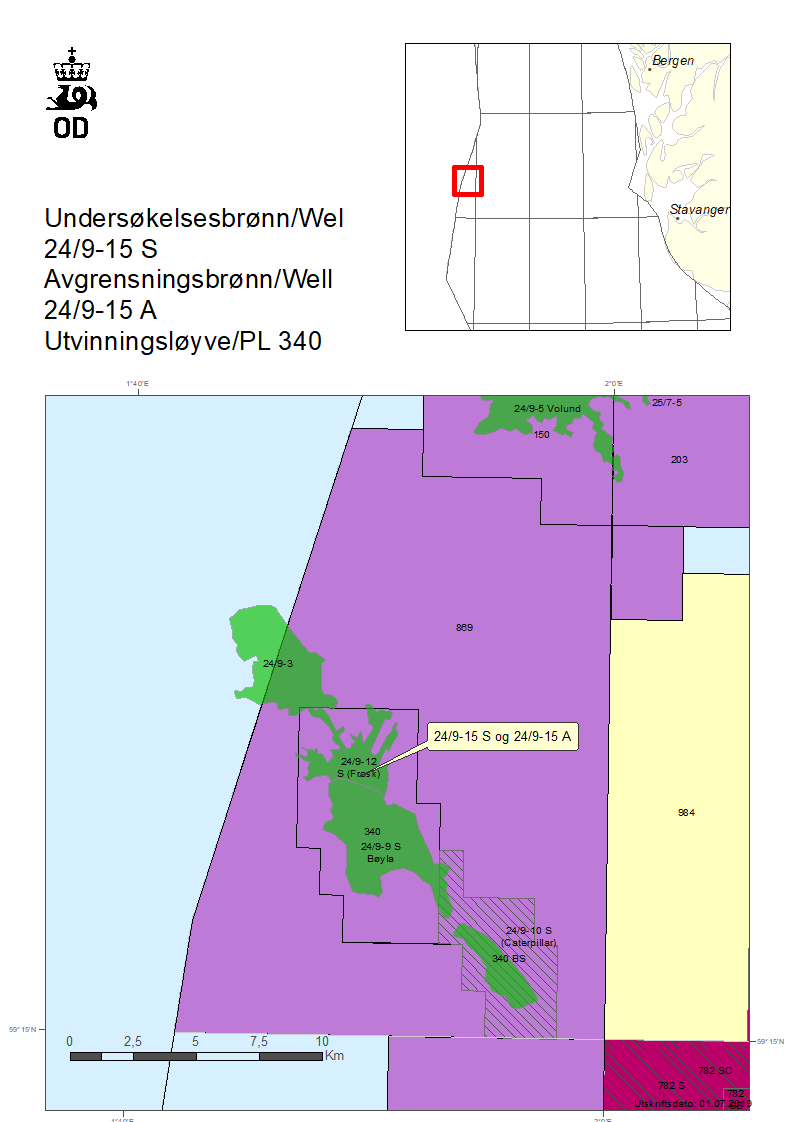