The wells were drilled about 8 kilometres northwest of Ringhorne on the Balder field in the central part of the North Sea and about 200 kilometres west of Stavanger.

The primary exploration target for well 25/8-19 S was to prove petroleum in injectite sandstones in the Eocene to Paleocene and in reservoir rocks in the Lower Jurassic (the Nansen Formation in the upper part of the Statfjord Group).

The secondary exploration target was to prove petroleum in sandstones in the Paleocene (the Ty Formation), in reservoir rocks in the Lower Jurassic to Upper Triassic (the Eiriksson Formation and the Skagerrak Formation) and in basement.

The oil/water contact was not encountered. Weathered and partly fractured basement (under a basal conglomerate) is oil-bearing with a column a minimum of 41 metres, but with poor to tight reservoir quality.

In the primary exploration target, a total of 18 metres of gas and oil-filled sandstone layers with moderate to good reservoir quality were encountered in the Skagerrak Formation. No oil/water contact was proven.

In the secondary exploration target, the Nansen and Eiriksson Formations came in with water-bearing sandstones of about 50 and 30 metres respectively, mainly with good to very good reservoir quality.

A thin, oil-bearing sandstone of 2 metres with good reservoir quality was encountered in the Heimdal Formation, and which delineated the oil discovery in the Paleocene.

A formation test has been performed in the Skagerrak Formation in the appraisal well. The test yielded maximum respective oil and gas production rates of 475 and 75,600 standard cubic metres (Sm3) per flow day through a 32/64-inch nozzle opening.

The formation test revealed moderate flow properties. Water was not produced during the test. Measured average GOR and oil density are 180 m3/m3 and 40 API respectively.

Preliminary estimates place the size of the oil and gas discovery in the Skagerrak Formation between 2 and 11 million standard cubic metres (Sm3) of recoverable oil equivalents.

So far, no recoverable volume has been calculated for oil and gas proven in the other levels. The licensees will now evaluate the well results with regard to financial commerciality, further delineation and other prospectivity in the licence.

These are the first and second exploration wells in production licence 820 S. The licence was awarded in APA 2015.

Water depth at the site is 126 metres. The wells have been permanently plugged and abandoned.

Wells 25/8-19 S and 25/8-19 A were drilled by the Deepsea Bergen drilling facility, which will now proceed to the shipyard at Ågotnes west of Bergen for periodic classification. 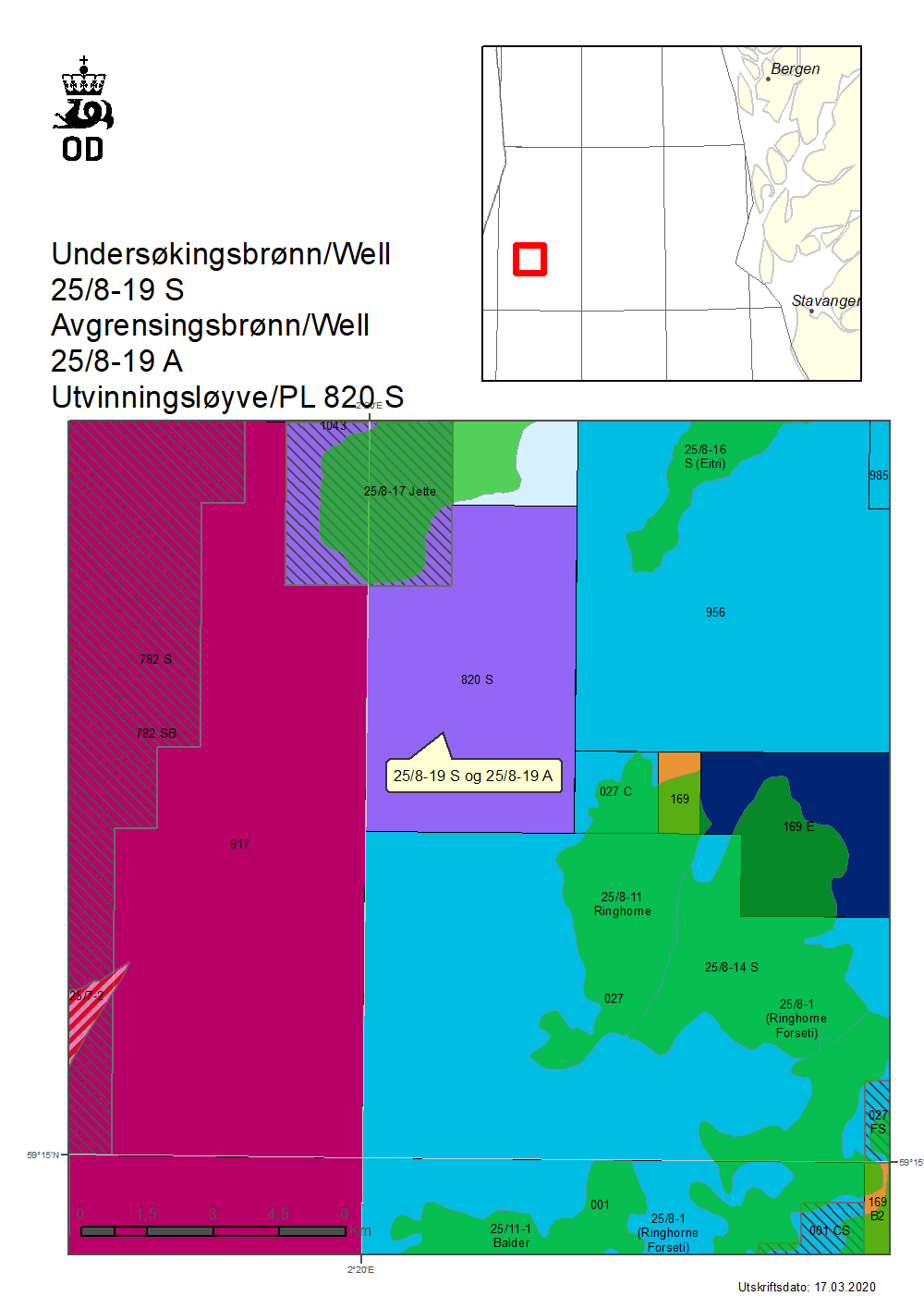