08/01/2009 The high price of oil in 2008 led to a considerable increase in both activity and cost levels on the Norwegian shelf. Investments, including investments in exploration activities, showed a continued growth in relation to previous years. The NPD’s preliminary estimate is in excess of 130 bill. NOK. 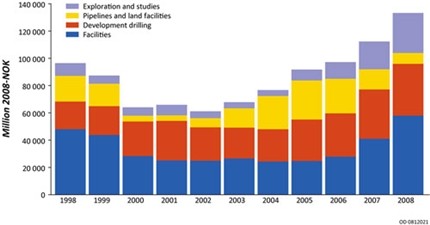 The future impact of the huge drop in oil prices and the general economic situation is a subject of great uncertainty. The activity level in the next few years is largely determined by decisions taken a few years ago.

A large part of the investments in 2009 relates to the Gjøa, Skarv and Yme field developments and to investments in producing fields: Ekofisk, Eldfisk, Norne, Ormen Lange, Snorre, Statfjord, Troll (oil), Valhall and Åsgard.

The investment level is fairly robust for oil prices of USD 60 and higher. However, if the oil price remains lower than this, cost reductions will be required, including lower prices from suppliers and thus lower break-even prices in order to ensure that the future activity level is not sharply reduced.