The shelf in 2008 - Resource accounts

08/01/2009 There is no significant change in the in the overall estimate for petroleum resources on the Norwegian shelf as of 31 December 2008. The estimate is 13 billion standard cubic metres of oil equivalents (Sm³ o.e.). 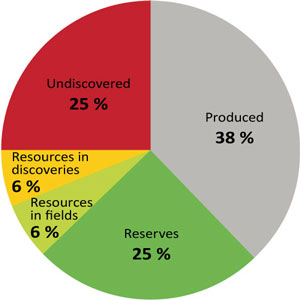 Distribution of petroleum resources by maturity as of 31 December 2008

5.1 billion oil equivalents (Sm³ o.e) have been produced. As many as 73 discoveries are being evaluated, as well as nearly 280 projects for improved recovery. Together with approved projects, this yields a portfolio of 5.0 billion Sm³ o.e. remaining, proven resources.

In relation to the authorities' goal of maturing 800 million Sm³3 (five billion barrels) of oil to reserves by 2015, 29 million Sm³ of oil (or about 183 million barrels) were listed as new reserves in 2008. The largest increase in oil reserves comes from the Morvin, Ula and Oseberg fields.