The shelf in 2008 - exploration activity

Near the Alve field, oil was proven in well 6507/3-5 S, while well 6507/11-9 proved gas in the Åsgard area. Further south in the Norwegian Sea, three discoveries were made near the Njord field, gas in wells 6407/8-4 S and A, east of the field, and gas/condensate in well 6407/8-8 north of the field. Gas has also been proven in well 6407/6-6 south of the Midgard discovery, which is part of Åsgard. The discoveries were made in rocks from the Jurassic Age.

The discoveries in the North Sea are mostly small, and those proven by StatoilHydro are situated near established infrastructure in Jurassic rocks. In the Fram area in the northern part of the North Sea, oil was proven in development well 35/11-B-23 H, which also had exploration targets. Further west, to the south of the Visund field, oil and gas were recently proven in well 34/8-14 S. This discovery is now being delineated. Oil was also proven in development well 31/4-A-01 A, with exploration targets at the Brage field. Further south in the North Sea in the Oseberg area, oil discoveries have been made in wells 30/9- 21 S and 30/9-21 A, while near the Grane field in the central North Sea, an oil discovery was made in well 25/11-25 S in Tertiary rocks.

Other players have also contributed in the North Sea. BG Norge AS discovered oil in 34/3-1 S, situated in the northern part of the North Sea in the Cook Formation in Jurassic rocks. The company also made a minor oil/gas discovery in well 15/12-19 in block 15/12 on the border with the UK shelf. This discovery is situated between the Rev field and the old 6/3-1 Pi discovery, and was made in rocks from the Jurassic and Triassic Ages. Eni Norge AS made the 34/12-1 gas discovery east of the Gullfaks area in Jurassic rocks. Further south, Noil Energy ASA proved oil and gas in the Balder area in well 16/1-9, while Talisman Energy Norge AS has proven oil at the Varg field in well 15/12-20 S. Dong E&P Norge AS made an oil discovery in Paleocene rocks in well 1/3-11 south of the 1/3-6 discovery.

Some older discoveries were also delineated in 2008 and proved interesting additional resources. In the Norwegian Sea west of the Åsgard field, Eni Norge drilled appraisal well 6507/4-2 on the 6507/2-2 discovery proven in 1992 by NorskHydro in Cretaceous rocks. In the North Sea, StatoilHydro has delineated the old 15/5-1 Dagny gas discovery in Jurassic rocks, proven in 1978. Oil was proven in appraisal well 15/5-7, which was drilled deeper into the structure. Further south, Dong Norge drilled appraisal wells 1/3-10 S and A on the Paleocene discovery 1/3-6. These two wells have provided important geological information about this discovery, proven in 1986 by Elf Petroleum Norge AS. 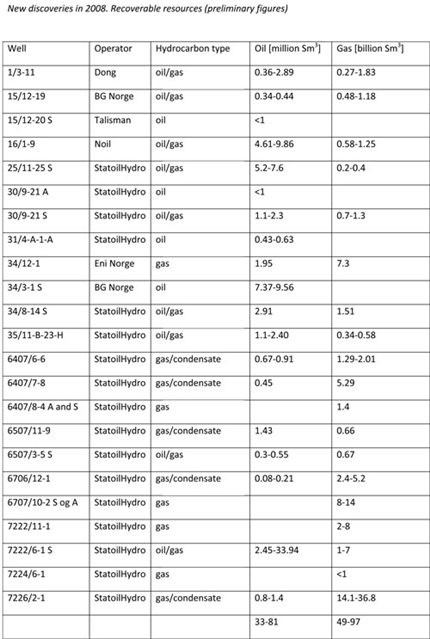