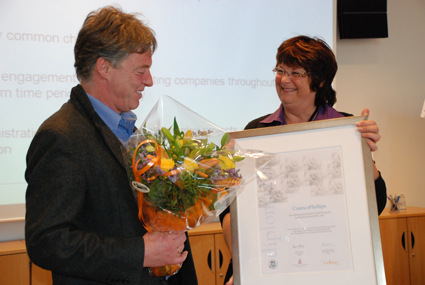 Nyland thanked the company for its substantial commitment to the programme over a period of many years, without receiving economic compensation.

The special certificate and flowers were received by technical manager in ConocoPhillips Hroar Hermansen, who, along with an assistant, has been responsible for project implementation and budget in JCR.

According to Hermansen, the tasks have e.g. consisted of promoting discussions, gathering the groups around a joint understanding of problems, and ensuring that the projects have delivered on time and as agreed.

”This has been very interesting work, which has been professionally rewarding and has given us access to many knowledgeable people”, says Hermansen.

JCR was established in 1980 by the Norwegian Petroleum Directorate and the Danish Energy Agency, along with the licensees on chalk fields in the North Sea. The chalk research on the Norwegian shelf dates back to the beginning of the 1970s, when development of the ConocoPhillips-operated Ekofisk area showed that the enormous chalk reservoirs there had a very low recovery rate.

The research programme focuses on problems tied to such reservoirs, and has provided new knowledge that has contributed greatly to the substantial increase in recovery rate from chalk reservoirs. The research has also contributed to extending the fields’ lifetimes. According to Hermansen, the work has involved the companies’ internal research departments, in addition to universities and other research institutions.

The work in JCR has been divided into different phases. The seminar being held in the NPD’s premises on 1 and 2 November is an initiative to start another phase, which would be the seventh phase so far. Among the topics to be discussed at the meeting are potential new research projects and appointing new contact persons.

The 37 participants come from the oil companies, the NPD, the Danish Energy Agency, and Nordsøfonden. The latter is the Danish state-owned oil and gas company – a parallel to the Norwegian Petoro. It has been suggested that Nordsøfonden should take over as administrator after Conoco Phillips.