22/02/2011 Today, 22 February, Stavanger mayor Leif Johan Sevland opened the Norwegian Petroleum Directorate’s new building in Stavanger. When he congratulated the NPD on the new building, he emphasised how important it is that the NPD and its employees have suitable working conditions, so they can do the best job possible job as resource managers on the Norwegian shelf. 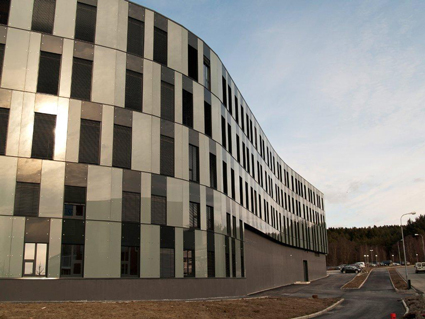 Entra, the government’s real estate company, is the builder and owner of the new building and the architect is Erik Thesen.

“We wanted a building that the employees would enjoy, and that would have an inspirational and unifying effect on the organisation, and that’s what we got”, says director general Bente Nyland.

About 4,500 of the total 16,000 square metres are being used to store the NPD’s unique collection of core samples from the Norwegian continental shelf. In a new building, the “core store” can accommodate new core samples for decades to come.

Entra, the government’s real estate company, is the builder and owner of the new building, which is part of a larger construction complex at Ullandhaug. A part of the original NPD building from 1985 has been renovated and joins the new building with the old.

“When we have entered into a 20-year lease, it’s important that we have a building that satisfies both our current needs and any foreseeable needs we will have in the future. The building is appropriate for the times, but also timeless and flexible,” she says.

She adds that the building is environmentally-friendly and easy to operate, and that new offices can be added, if necessary. The entire construction project received the energy class B, which is the second best grade in the new energy class system. It involves strict requirements for energy consumption and sources. Among other things, the new building has heat recycling which utilises waste heat from nearby server rooms.

Kyrre Olaf Johansen, managing director of Entra Eiendom, is very satisfied with the new building: “Professor Olav Hanssensvei 10 is an important environmental building for Entra. It sets the standard for our other development projects,” he says.

It is important to the NPD that the building underpins the Directorate’s identity. Therefore, geology and colours from the geological time scale have been used as a background for interior design and decoration.

The building’s decoration also shows the earth’s geological history from the beginning, 4.6 billion years ago. Field names from the Norwegian continental shelf are used for meeting rooms and other areas, a tradition continued from the original NPD building. 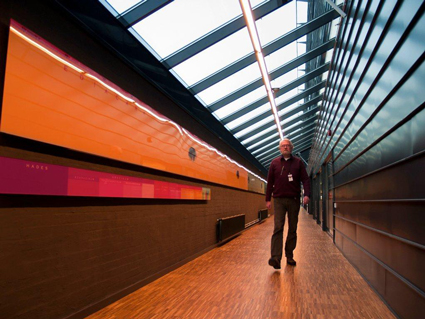 A seismometer has been set up in the reception area which can register earthquake activity across the entire globe. In the same area, an ichthyosaurus fossil from the Triassic Age approximately 230 million years ago is on display. It was found by NPD geologists while doing field work on Svalbard in 2007. The NPD has collaborated with the University of Oslo on transport and preparation.

The Petroleum Safety Authority Norway (PSA), a separate agency which was split from the NPD in 2004, will also have new offices at Ullandhaug.

The work on renovating the NPD’s and PSA’s old offices is now going full force, so parts of the area will still be  a construction zone for a little while longer. Scheduled completion is by 31 December 2012. In total, the building mass will be 37,000 square metres, making this one of Entra’s largest construction projects.