Monitors movements in the earth’s crust 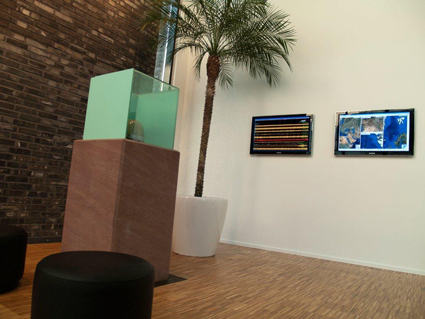 The seismometer in the reception area is part of a global network of instruments.

The device monitors seismic activity across the entire globe, and continuously transmits data to the Seismological observatory in Bergen.

”The seismometer reflects the geological theme of the new building, and will contribute to understanding of how the forces in the earth’s crust work in the areas in and around the Norwegian mainland,” says senior geologist Christian Magnus of the NPD.

An older edition of the device was placed in the basement of the old building. Since parts of the building will be demolished, the seismometer needed a new home. In keeping with the geological theme of the new building, the NPD decided to give the device a more visible placement in the reception.

Two screens have been mounted on the wall behind the device, so employees and visitors can see the movements of the earth’s crust. In addition, a GPS transmitter has been mounted on the roof of the building, which helps ensure correct localisation of earthquakes’ epicentres.

The seismometer is part of a global network of metering instruments. This makes it one small piece of a monitoring system which, among other things, is important for the safety of people and facilities on the Norwegian shelf.

The NPD has made a financial contribution toward the new device, which according to Magnus is of high quality, and situated so it has better contact with the subsurface than the old one.