22/02/2011 During geological field work for the Norwegian Petroleum Directorate in the summer of 2007, geologists found a well-preserved skeleton of a small ichthyosaurus on a plateau near Muenfjellet, on the western coast of Edgeøya in Svalbard. Even though remnants of ichthyosaurs are not uncommon on Svalbard, it is very rare for the head to be preserved – which was the case with this discovery. 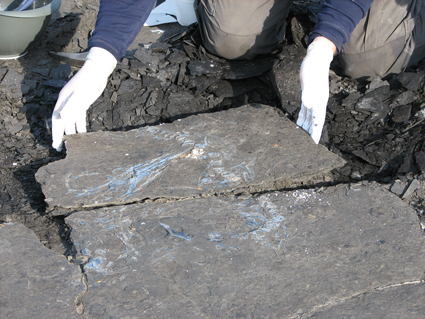 One of the plates of the ichthyosaurus fossil is carefully extracted to be bandaged in plaster for transport to the boat. The eye socket and ”beak” are clearly visible, surrounded by parts of ribs and dorsal vertebra (photograph: Jan Stenløkk).

The Norwegian Petroleum Directorate's field programme continued the following year, and the Natural History Museum in Oslo was invited to extract and secure the important fossils, if possible. The Ministry of the Environment granted the museum permission to extract up to three skeletons..

On Edgeøya, the ichthyosaurs are located in a metre-thick layer of shale that was deposited in the Middle Triassic (the Botneheia formation) – about 230 million years ago. The bones often contain a bluish mineral and are therefore easy to spot. The fossils were fairly exposed, and were therefore highly vulnerable to weathering through frost action and other erosion.

Over the course of the 2008 field season, the palaeontologists from the Natural History Museum were on the Muen plateau for two days, and the fossil extraction was successful beyond all expectations. Several bones were gathered; skulls, jaws, spines, humeri, coxal and scapula bones and ribs. Several of these were joined in larger skeleton groups. The museum also collected three more or less complete ichthyosaurus skeletons. On two of these, the cranium was preserved. A larger skeleton was also discovered, but it was not extracted due to the size and time constraints.

The ichthyosaurs lived in the Mesozoic era, during the Triassic, Jurassic and Cretaceous periods. With its streamlined body, it was similar to our dolphins and whales and was adapted to living in water. The ichthyosaurs breathed air, gave birth to live young and ate fish and squid.

The polar bears that live and hunt in this area were a challenge in the work to secure the ichthyosaurus skeletons. The polar bears were also present during the summer season of 2008. A bear approached the geologists and laid down not far away to study the work. For safety reasons, the work was stopped as soon as practically feasible.

The Norwegian Petroleum Directorate has partially sponsored the fossil preparation. In the autumn of 2010, the most complete, small ichthyosaurus was sent to the Löwentor museum in Stuttgart, Germany, where it was e.g. sandblasted, so that the bones are more visible. The specimen will be used at the museum in Germany in connection with training of a newly hired technician at the Natural History Museum in Oslo. Thus, the museum in Oslo secures both a prepared specimen, and the technician gains insight into modern preparation methods.

The best preserved ichthyosaurus fossil is on loan from the Natural History Museum to the Norwegian Petroleum Directorate in Stavanger, for exhibition in the reception of its new office building. But if this turns out to be a new species of ichthyosaurus, currently unknown to science, the discovery must be supported with an exemplar. Such a holotype must be kept in a museum, and the Norwegian Petroleum Directorate will then receive a cast of the original.