PGS will be conducting the acquisition on behalf of the NPD using the vessel R.V. Harrier Explorer.

This is the first time this area will be systematically mapped. The seismic acquisition activity will continue until the first half of September 2011, with a possible extension of a couple of weeks. The acquisition will be 2D seismic, which means that one long streamer – 8100 metres – is fastened to the vessel. The seismic lines have variable spacing – from 5 to 15 kilometres.

NPD geophysicist and project coordinator Lars Jensen tells us that the sea area to be mapped is quite large. He says that the NPD plans to complete acquisition of seismic data next summer so that the results will be ready in the spring of 2013.

The data acquisition will take place using PGS' GeoStreamer technology. This is a new technology for seismic acquisition, characterised in part by the fact that the streamer is towed somewhat deeper in the water than is the case in conventional seismic acquisition. This means that the cable can withstand higher waves, making the acquisition activity less weather-dependent and thus more efficient.

The Harrier Explorer is coming from Jan Mayen, where the vessel has been shooting seismic for the NPD for about 3.5 weeks. So far, Lars Jensen is pleased with the GeoStreamer technology, and says that the acquisition activity has gone very well and with no weather delays.

The acquisition will start with five SSE-NNW lines. The plan is then to acquire a few lines in the north-south direction in order to complete the southernmost part of the area first.

Daily reports will be issued from Vardø radio stating the position of the seismic vessel for the next 24 hours. 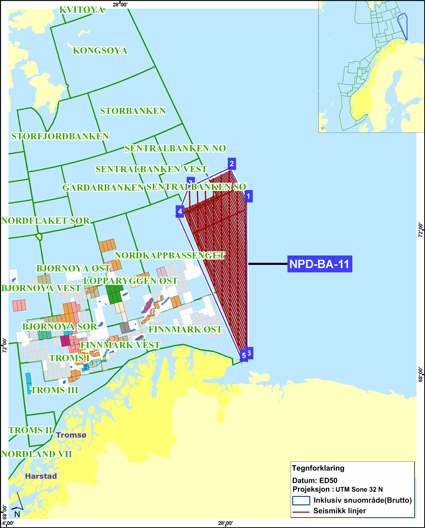