07/06/2011 Far more oil and gas is now being produced from subsea wells on the Norwegian continental shelf than from platform wells.

The Norwegian Petroleum Directorate has collated production from the fields in 2010 and found that subsea wells dominate the picture.

In the past ten years, the trend of more subsea wells has been rising. Increasingly improved technological solutions have made it possible to develop many small reservoirs using subsea facilities in instances where a solution with a fixed platform has not been commercially viable. 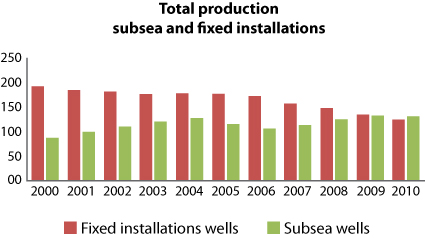