28/08/2012 The Norwegian Petroleum Directorate’s prize for improved recovery for 2012 is awarded to the subsurface environment on the Oseberg field. 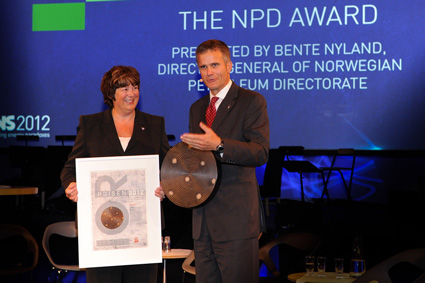 The experts in Statoil receive the award for their work on gas injection.

Director General Bente Nyland says that the people who work on the Oseberg subsurface are worthy recipients of the IOR prize.

“Thorough technical work enables good and profitable decisions. The work, particularly regarding reservoir aspects, and the expert recommendations we have seen ever since the field started producing and up to the present, are characterised by a long-term mindset, not a desire for short-term rewards,” says Nyland.

This is the first time the NPD has awarded the IOR prize for gas injection, even though this has been a very successful method that has yielded considerable additional income from the Norwegian shelf.

Gas injection is one of multiple measures that have resulted in substantially increased oil volumes from Oseberg. The NPD estimates that gas injection has yielded more than 60 million standard cubic metres (Sm3) (about 400 million barrels) of additional oil from the field than would be the case with just water injection. This is more than an entire Veslefrikk field. The field will continue to produce for a long time, and opens up new opportunities for use of technology promoted by enterprising employees.

It started with the TOGI project (see fact box), and continued with re-injection of own gas to increase oil production from the field. Important decisions have been made in several rounds, most recently in 2011, relating to optimisation and continuation of gas injection. This has further increased recovery.

“Oseberg paved the way for many other fields, also by importing gas from another field. The very successful use of gas injection resulted in major ripple effects for other fields”, according to the Director General.

Gas has been injected on a total of 28 fields on the Norwegian shelf. The NPD has estimated that Norway extracts about 350 million Sm3 (2200 million barrels) more oil from the fields using gas injection. This is more oil than the expected oil resources on Johan Sverdrup, and is approximately the size of the Gullfaks field.

“Use of gas injection deserves a prize, and perhaps we should have awarded it sooner. Injecting gas to recover more oil, and then producing most of this gas later, is a good example of long-term resource utilisation”, says Nyland:

“The Petroleum Act also requires that companies take such considerations into account. These days, with high oil prices and relatively low gas prices, further use of gas injection is relevant for both operating fields and upcoming field developments. Both courage and determination were needed to implement the TOGI project – not least because the development was already approved with water injection. This meant that Oseberg had to be considered again in the Norwegian Parliament (the Storting).”

The Ministry of Petroleum and Energy (MPE) recently approved the plan for removal of the TOGI facility, which has thus completed its course. In its day, it was also an important precondition for the success of Troll Olje, which was based on subsea templates.

The bold decision to use gas injection as the main method for oil recovery on Oseberg has continuously been followed up by reservoir engineers, first in Hydro, then Statoil. The planned date for gas blowdown has been postponed multiple times, based on the experts’ recommendations. This is because the company has determined that it is still profitable to continue injecting own gas to maintain the pressure. The experts have supported this position, most recently in an important decision in 2011, and also during periods when more export gas was demanded.

“We want to give credit to the experts who have contributed to making gas injection on Oseberg a success story. They have really made it happen! We hope that this will inspire continued solid technical work on the Norwegian shelf along with even more good, and sometimes audacious, decisions,” says Nyland.