16/01/2012 The Norwegian petroleum activities are experiencing a period of strong growth in activities and high investment levels. This is positive; however, such a development also poses challenges as regards capacity and the companies’ ability to implement planned projects.

Exploration costs in 2012 are estimated at about NOK 30 billion, which is approximately the same level as estimated in the previous forecast. 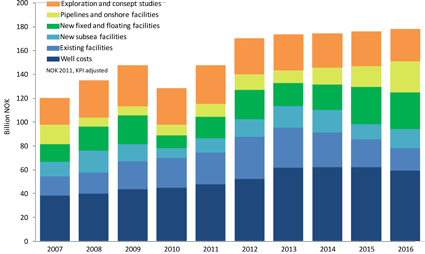 Figure 1: Development in investments on the Norwegian shelf – forecast from and including 2011.

In 2010, investments declined for the first time since 2002, from a level of a scant NOK 150 billion in 2009. One of the contributing causes of the decline was the drop in oil prices in the wake of the financial crisis in 2008. For the next few years, a similar trend of increasing investments as from before 2010 is expected to continue.

Investments undertaken in 2011 ended a little lower than expected at the previous year-end. The Norwegian Petroleum Directorate’s new forecast for the period from and including 2012 shows an increase in investments compared with the previous forecast, cf. Figure 2. 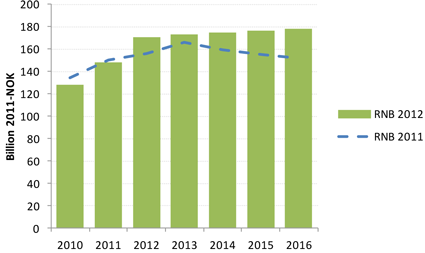 Figure 2: Forecast to the revised national budget RNB2012, compared with the previous forecast 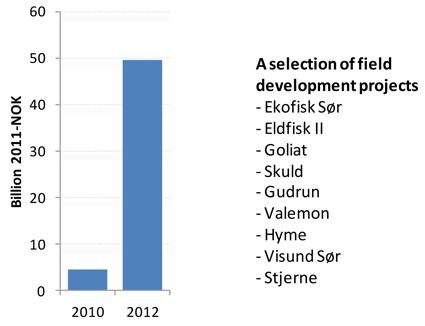 Figure 3: Increase in investments 2010-2012 for a selection of development projects

During the period 2010-2012, it is particularly investments in new facilities that will rise, both new fixed- and floating facilities, and subsea facilities. Operational investments in producing fields also contribute to the increase. Up to 2016, the increase in overall investments largely relates to higher investments in development of discoveries and new projects on fields currently in operation. All in all, this will help maintain record-high investment levels on the Norwegian shelf in the next few years.

Most of the investments in the NPD’s forecasts linked to the Skrugard, Havis and Aldous/Avaldsnes discoveries will come after 2016, and will thus contribute to maintaining continued high investment levels up to 2020.

The challenge of a high activity level

The development in the activity level represents a number of capacity challenges, both in connection with studying and maturing projects, project implementation for operating companies and deliveries of goods and services from the supplier industry. This is the case despite the fact that some of the investments will be linked to activity carried out abroad.

Access to drilling rigs is a crucial bottleneck. When available information about new rigs is compared with planned drilling activity, it is evident that the industry faces a considerable challenge in obtaining sufficient rig capacity for drilling and well maintenance on fields, as well as for new developments and exploration. Compared with the operating companies’ project reporting of future investments, the NPD expects a substantial delay in projects. Such a delay has been used as a basis for the forecast in Figure 1.

The investment forecast is based on the oil companies’ oil price expectations. However, the international financial situation is uncertain. A sharp and prolonged decline in the price of oil could have a major impact on investments. However, for 2012, and to some extent also for 2013, the investments are largely linked to projects that have already been approved and initiated.

Operating costs are expected to amount to more than NOK 60 billion in 2012, and then rise moderately in the subsequent years due to development of discoveries.

Development in overall costs in the petroleum activities is illustrated in Figure 4. 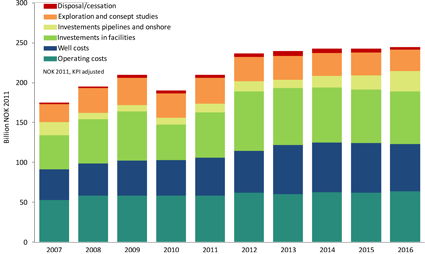 Figure 4: Forecast for development of the overall cost level

The price development for goods and services will determine the overall development in the cost level, measured in current NOK. The effect of various price increase scenarios is illustrated in Figure 5. 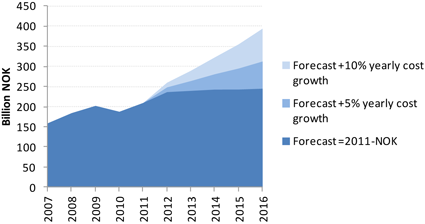