Greatest activity in the North Sea

Exploration activity has been highest in the North Sea, where 34 exploration wells were spudded. The best, and also the most surprising, results have come in the areas east of the Utsira High in the central part of the North Sea.

Several appraisal wells were drilled on the 16/2-6 ”Avaldsnes” discovery, which proved oil in the Intra Draupne formation from the Jurassic Age. The well results show that the discovery is part of the same structure complex where Statoil proved oil in well 16/2-8 ”Aldous Major South” in 2011. The discovery ”Avaldsnes/Aldous” now emerges as one of the largest ever made on the Norwegian shelf, and significant appraisal activity is expected in the area in 2012.

The other discoveries in the North Sea were generally small. In the area north of ”Aldous Major South”, Statoil proved only minor volumes of oil in a poorly developed, thin Upper Jurassic reservoir in wildcat well 16/2-9 S. Further west, Lundin has delineated the northern part of the 16/1-8 ”Luno” discovery, proven in 2007 with wells 16/1-15 and 15 A. The wells have proven additional resources in the Luno discovery.

Statoil made two minor discoveries in the Sleipner area. The company proved gas/condensate in the Ty formation in the Paleocene section in well 16/7-10 in the southern part of the area, and oil in well 15/6-12 in the Hugin formation north of the Dagny discovery. To the east of this area, Noreco discovered smaller volumes of oil in the Jurassic section in well 17/6-1. This is a small discovery, located in a relatively unexplored area in the eastern part of the North Sea.

Further north, near the Alvheim discovery, Marathon made an oil discovery in the Hermod formation in the Paleocene section in well 24/9-10 S. The company also proved oil in the Upper Jurassic section of well 25/10-11 west of the Balder area. Both discoveries are small.

In the northwest part of the North Sea, BG Norge proved oil in well 34/3-3 S in the Cook formation from the Jurassic Age. The discovery was production-tested and delineated with well 34/3-3 A. This discovery is located right next to the Knarr field, also operated by BG Norge.

Three discoveries in the Norwegian Sea

Three new discoveries were made in the Norwegian Sea, near existing fields. The largest of these was made by Total in well 6607/12-2 S just north of the Alve discovery. The well proved oil and gas, both in the Lyr formation from the Early Cretaceous, and in the Fangst Group from the Jurassic.

Further south – just west of the Mikkel field - OMV proved gas in two levels in the Rogn and Garn formations respectively, in well 6407/5-2 S in the Jurassic. Further north, just south of the Norne field, Det norske oljeselskap proved oil and gas in the Tilje and Åre formation from the Jurassic/Triassic, in wildcat well 6508/1-2. Both of these discoveries are small.

One well was drilled in the deep water areas in the Norwegian Sea, north of the 6603/12-1 ”Gro” discovery. Wildcat well 6604/2-1 was drilled by BG Norge to test the Springar formation in the Upper Cretaceous. No hydrocarbons were proven in this well.

Three discoveries in the Barents Sea

There were good drilling results in the Barents Sea in 2011. Three new discoveries were made: one oil and two gas. Statoil proved oil and gas in well 7220/8-1 ”Skrugard”, about 110 kilometres north of the Snøhvit field, west of the Loppa High. Oil and gas were discovered in the Stø formation and oil in the Nordmela formation in the Jurassic. 25 kilometres north of the Snøhvit field, Lundin proved gas in well 7120/2-3 S. Gas was discovered at three different levels in the Kolmule and Knurr formations in the Cretaceous, and in the Stø formation in the Jurassic.

The northernmost discovery in the Barents Sea was proven 250 kilometres north of Melkøya, where Total found gas in well 7225/3-1 ”Norvarg” at several Jurassic and Cretaceous levels. A successful formation test was completed in the upper part of the Kobbe formation in Triassic reservoir rocks.

The number of spudded exploration wells in 2012 is estimated at between 50 and 55.

50 production licences were awarded in the Awards in Predefined Areas (APA) 2010. The companies exhibited considerable interest in APA 2011, where awards are scheduled for the first quarter of this year. 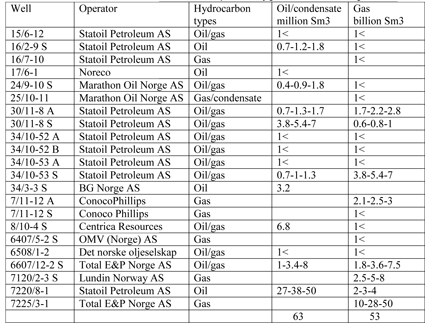