The year of surprises

16/01/2012 Last year was a year of surprises for the oil industry, and can best be characterised as an “annus hurrahbilis”. This was confirmed by Bente Nyland during today’s press conference. 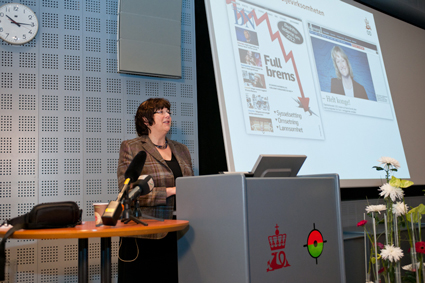 “It’s a pleasure to talk about 2011,” said the director general.

She reviewed the major discoveries that were made in the North Sea and Barents Sea that, according to her, have led to renewed optimism in the industry. The ”Aldous/Avaldsnes” discovery proves it is possible to make major discoveries in mature areas, and the Skrugard and Havis discoveries have doubled the resource estimate for this part of the Barents Sea.

Nyland said that her career as a recently graduated geologist began with the mapping of the Barents Sea in 1982.

“These discoveries show that you have to have faith. And hopefully, we’ve cracked the code in this area,” she said.

Last year, a scant NOK 150 billion was invested in the petroleum industry and the level has increased by 15 per cent from the preceding year. According to Nyland, this is due to an actual increase in activity, not just price increases as was the case for the last investment increase in 2009.

“We still have very good profitability, and we are able to develop discoveries that have lain fallow for several years,” Nyland continued.

She warned the industry to not forget to extract oil from the producing fields while celebrating the new discoveries.

“A production licence comes with a commitment, and everything that is profitable must come up”, said the director general.

“If we are to extract more from the current fields, we must drill more wells.”

State secretary Per Rune Henriksen in the Ministry of Petroleum and Energy characterised 2011 as “a particularly good year” and noted that very important discoveries were made that will have great significance for oil activities in the future.

At the same time, he warned about the cost development in the industry.

“A high cost level has a direct effect on value creation, and constitutes a risk that the resources will not be recovered,” said Henriksen.

“This is primarily the industry’s responsibility, and it would be wise to take this seriously.”