Continue mapping of the Barents Sea

18/09/2013 So far, the Norwegian Petroleum Directorate (NPD) has acquired 8800 km of seismic in the new Norwegian sea area in the northeastern part of the Barents Sea. According to the plan, the acquisition activity will continue until mid-October.

"The operation has been successful so far. Progress has been good, and we have acquired 69 per cent of the lines we want," commented Lars Jensen, who heads the NPD’s acquisition project.

A total of 12 800 km of seismic will be acquired in the northeastern part of the Barents Sea. The activity, which is a 2D seismic acquisition, has been underway since the end of July using the Artemis Atlantic vessel.

Mapping of the new Norwegian sea area in the northeastern Barents Sea started in 2012. The NPD is conducting the acquisition on assignment from the Government. The acquisition activity is part of the authorities’ work to obtain a better overview over potential petroleum resources on the Norwegian shelf.

In 2011 and 2012, the NPD acquired seismic in the sea areas off Jan Mayen and in the southeastern part of the Barents Sea. Seismic packages from these areas were offered for sale earlier this year. 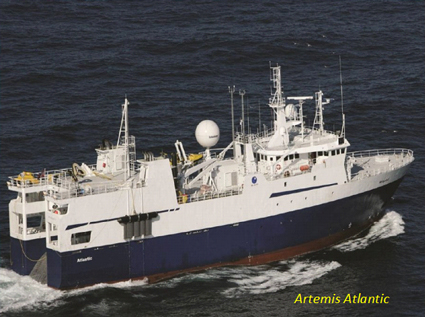