27/02/2013 The Norwegian Petroleum Directorate’s (NPD’s) mapping of the southeastern Barents Sea and the area surrounding Jan Mayen will result in an approximate increase of 15 per cent in the estimates of undiscovered resources on the Norwegian shelf.

This corresponds to about 390 million standard cubic metres (Sm3) of oil equivalents (o.e.).

The new resource figures were presented at an open meeting in Alta on 27 February. The mapping of these petroleum resources is a step in the authorities’ process to open these areas for petroleum activity.

The mapped area in the southeastern Barents Sea along the Russian border constitutes about 44 000 square kilometres. The NPD’s calculations show that expected resources total approx. 300 million Sm3 o.e., with an uncertainty range of 55 – 565 million Sm3 o.e. This means that the most pessimistic estimates lie at the low end of the spectrum, but that the petroleum volumes present could be considerably greater. Most of the resources in this part of the Barents Sea are expected to be gas. About 15 per cent are expected to be oil.

In the resource analysis for the southeastern Barents Sea, the NPD assessed the probability of discovering oil and gas in various geological areas. The Bjarmeland Platform furthest north and the Fedynsky High in the east are considered to be pure gas provinces, while the Nordkapp Basin, Tiddlybank Basin and Finnmark Platform are considered to be combined oil and gas provinces.

On the Fedynsky High, there is a possibility of petroleum deposits that span across the border between Norway and Russia.

The geological knowledge of the southeastern Barents Sea is relatively limited, as no exploration wells have been drilled and shallow scientific drilling has not yet been carried out in the area. However, a number of wells have been drilled in the open part of the southern Barents Sea, both scientific, shallow stratigraphic wells and commercial exploration wells. Literature also reveals some data from drilling carried out in the Russian part of the Barents Sea. Seismic data acquired in 2011 and 2012, as well as other geological data from the Barents Sea, provide a good basis for estimating the undiscovered petroleum resources in the southeastern Barents Sea.

The northeastern Barents Sea, which is also part of the new Norwegian sea area, is almost as large as the southern part. The NPD acquired seismic data here in the summer of 2012, and will continue in 2013. The resource figure from this area will further increase the estimate of undiscovered resources.

During the same period, the Norwegian Petroleum Directorate mapped possible petroleum resources in the sea area surrounding Jan Mayen. Seismic and aeromagnetic data, as well as numerous source rock samples, have been acquired in recent years in parts of the 100 000-square-kilometre area which may be opened.

The sea areas surrounding Jan Mayen that are included in the opening process border with the Greenlandic shelf to the west and the Icelandic shelf to the south. Geologically, the Jan Mayen area consists of the volcanic island Jan Mayen and the subsea Jan Mayen Ridge which runs in a southward direction from the island. The Jan Mayen Ridge is surrounded by oceanic crust which was formed as the North Atlantic Sea opened up. The process of forming a new oceanic crust started in the area about 55 million years ago, and is still taking place. This was how the Jan Mayen Ridge was separated from both Norway and Greenland and remained out in the ocean as a separate small continent, a micro-continent. The Jan Mayen Ridge is therefore expected to consist of the same continental and marine rocks that can be found in Eastern Greenland and on the Norwegian shelf in the Norwegian Sea, with possible petroleum potential.

Iceland has the right of use for parts of the shelf surrounding Jan Mayen and has already awarded production licences.

Main structural features in Norwegian and Russian parts of the southeastern Barents Sea. 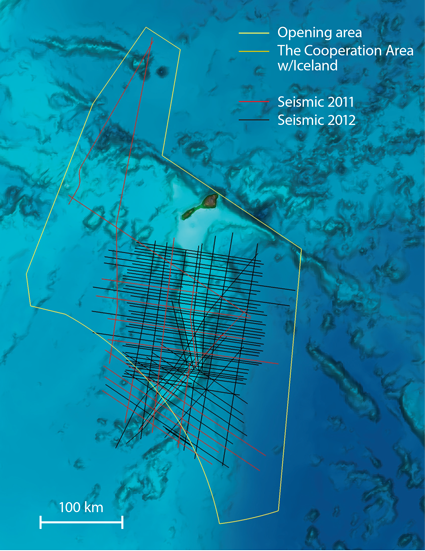 The Norwegian Petroleum Directorate's seismic acquisition in 2011 and 2012.