The processed seismic data will be sold as a data package.

The seismic data package will also include older, reprocessed 2D seismic data from the southeastern Barents Sea that was acquired in 1974 and 1976 and reprocessed in 1992 (approximately 2 160 kilometres).

The price of the seismic package is NOK 12 million plus VAT, cf the terms of purchase. The data will be distributed by DISKOS. Additional administration costs will be invoiced by the DISKOS distributor according to the current pricelist.

Place orders by filling out the order form and sending it to the NPD. By signing the order form, the terms of purchase are accepted. 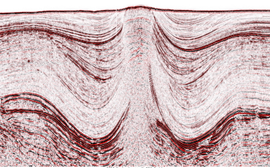