Taking over ownership of stratigraphic cores from Sintef

08/02/2013 The Norwegian Petroleum Directorate (NPD) is taking over a collection of 6.6 kilometres of shallow rock cores from the Norwegian continental shelf from SINTEF.

“The NPD has the overall responsibility for geological core material from the continental shelf, and we make it possible for researchers and students to study this material. We are very happy to get our hands on this collection,” says Dag Bering, technical coordinator for geology in the NPD.

The shallow drilling was carried out from 1982 to 1993 on behalf of what was then the Continental Shelf Institute (IKU), now part of Sintef Petroleum Research AS. Analyses of the core material have resulted in a number of scientific publications and reports.

IKU drilled shallow wells at water depths ranging from 100 – 1500 metres, 10 – 600 metres below the seabed. Each assignment cost around NOK 20 million, while the total cost (including processing) was NOK 500 million.

Drilling locations were determined based on detailed seismic mapping and the analyses of the samples provided very useful information.

The cores are stored in Dora, which was originally a WWII German submarine bunker in Trondheim, and the plan is to keep them here. The NPD and SINTEF have entered into an agreement to share the rental expenses for ten years, with an option for extension.

Bering says that the geological samples from the shallow boreholes are used for research and education, for example in connection with courses, projects and master’s degree programmes, and in connection with research on the continental shelf and exploring for oil and gas:

“The core store and exhibition room are frequently used by SINTEF and NTNU, and the samples are still relevant for exploration of the continental shelf. For example, they were frequently used by oil companies to prepare applications for the 22nd licensing round last year.”

The cores are between five and seven centimetres in diameter, and are split lengthwise. They provide a quick overview of rock types and sedimentary structures. They can be used for research within a number of areas, for example sediment types, stratigraphy, sedimentation and climate variations. 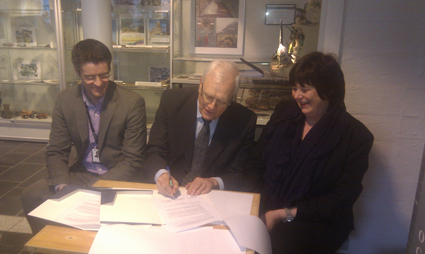