A historically high oil price and several major discoveries in recent years contribute to continued optimism in the Norwegian petroleum activities. The activity level in the petroleum sector is expected to remain at a high level. In the coming years, several discoveries on the shelf will be under development, in parallel with considerable activity in connection with an extensive portfolio of fields that are already in operation. This will require major efforts on the part of both operating companies and the supplier industry.

Investments and operating costs are expected to be higher in 2013 than previous years. The Norwegian Petroleum Directorate’s (NPD’s) newest forecast estimates NOK 157 billion and NOK 62 billion, respectively. From 2013-2017, exploration costs are estimated to be about NOK 35 billion a year.

Investments for 2013 are expected to total NOK 157 billion, cf. Figure 1, and are expected to increase steadily to about 190 billion 2012-NOK in 2017. Exploration costs will come in addition and are estimated at NOK 35 billion per year during the forecast period.

In particular, investments related to drilling of production wells from mobile rigs are expected to increase. A number of new rigs have been ordered to meet this need. 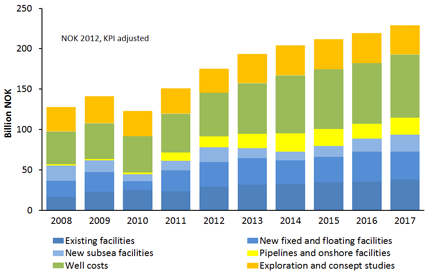 The investment estimates are larger than in the NPD’s previous forecast. This is partially caused by several major projects progressing more rapidly than previously assumed, and partially by reports of a higher expected investment level for a number of fields and discoveries.

The investment level for fields in operation is expected to be around NOK 100 billion per year for the next five years. The largest item is drilling of new production wells, followed by modifications and further development of existing facilities. There will also be construction of new facilities on several fields in operation. A considerable share of the overall investments in upcoming years is associated with ongoing field developments. These investments are expected to reach about NOK 50 billion in 2013, and then decline rapidly as the projects are completed.

There is greater uncertainty associated with the investments for discoveries that have not yet been matured up to an investment decision. Overall, there is a considerable increase in the investments related to development of new fields – particularly Johan Sverdrup. In addition to major discoveries such as Johan Sverdrup and Skrugard/Havis, several smaller and medium-sized discoveries have been made in recent years. The operating companies’ reports have been generally adjusted, as experience dictates that they often have an overly ambitious schedule.

The forecast was made in fixed 2012-NOK. The price development for goods and services contributes to determining the development in cost level measured in current NOK. The effect of different preconditions with regard to price increase is illustrated in Figure 2. 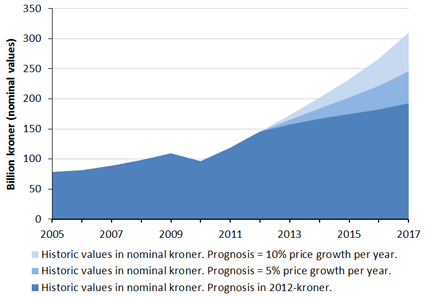 Exploration costs could vary considerably from year to year. Given the many, and in part, significant, discoveries in recent years, considerable awarded area and better access to rigs, a continued high level of exploration activity is expected. The exploration costs for 2013 are estimated at NOK 35 billion. This level is also used as a yearly basis up to 2017, with an assumption of 50 exploration wells per year.

The different investment and cost components included in the NPD’s overall forecast for Norwegian petroleum activities are shown in Figure 3. The overall level in 2013 is estimated at NOK 265 billion. The forecast increases to 300 billion 2012-NOK in 2017. 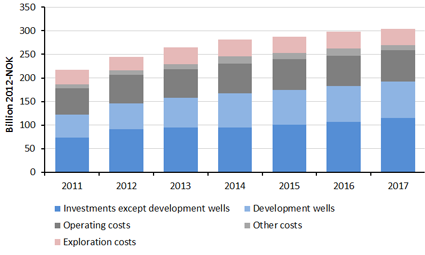 A high activity level within the petroleum sector represents possible capacity challenges both in connection with assessment and maturing of projects, project implementation for operating companies and delivery of services from the supplier industry. At the same time, the supplier market is international, and increased division of assignments and labour migration contribute capacity to meet the need for deliveries.

Access to drilling rigs has been an important bottleneck. However, this scenario is constantly changing. Several new rigs have been constructed and will be ready for use in the next few years. Flotels have posed another bottleneck. In particular, this impacts construction and modification activities on existing facilities. There will also be a marked increase in capacity here in the years to come.

Access to qualified personnel is assumed to be a challenge for both operating companies and the supplier industry. As previously stated, increased internationalisation will help meet this challenge, both through activities such as engineering services and fabrication of facilities and equipment partially taking place internationally, and through international recruitment of personnel.