11/01/2013 A total of 224 million saleable standard cubic metres of oil equivalents (Sm³ o.e.) was produced in 2012. This is 39.5 million Sm³ o.e. less than in the record year 2004, but two per cent more than in 2011. The increase can be attributed to record-breaking gas production. Oil production continued to decline.

Total production of petroleum in 2013 is estimated at 213 million Sm³ o.e, about five per cent lower than in 2012, but is subsequently expected to rebound to last year's level. 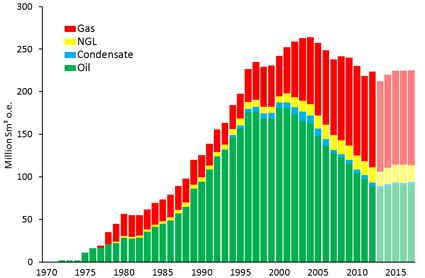 It is difficult to predict gas sales levels, even over the short term. Sales are six per cent higher than the forecast for 2012. In comparison, 2011 sales were eight per cent lower than expected. Compared with oil production, gas sales will also fluctuate with demand in Europe, which is e.g. dependent on temperature. 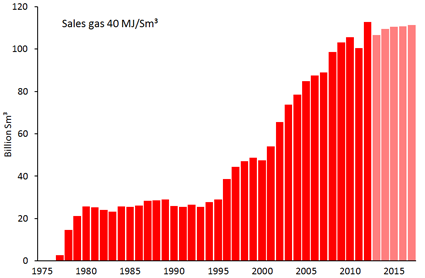 Last year's oil production was almost five per cent lower than the Norwegian Petroleum Directorate's autumn 2011 estimate. Two main reasons explain the discrepancy: delayed production start-up for some fields, as well as some prolonged unplanned shutdowns of producing fields due to repairs and tie-in of new facilities.

For 2013, the NPD estimates that oil production will continue to decline, to 85.5 million Sm³ (1.47 million bbls per day), after which a small increase is expected. The estimated uncertainty in 2013 is +13/-14 per cent. The uncertainty is particularly linked to the reservoirs' ability to deliver, drilling of new production wells, start-up of new fields and regularity of the fields in operation.

For 2013, production of condensate and NGL are forecast at volumes of 3.7 million Sm³ and 8.8 million tonnes, respectively. Total liquid production is therefore estimated at 106 million Sm3 o.e. (1.83 million bbls o.e. per day).

The table below shows the production forecast divided by the various products for the next five years.

Estimated oil production is expected to reach 446 million Sm³ in the period 2013-2017, which is 84 million Sm³ less than in the previous five-year period. The oil production is expected to come from fields in operation or from fields approved for development. This includes improved oil recovery measures on these same fields. Production that has been approved accounts for 92 per cent of the volume in the five-year period. 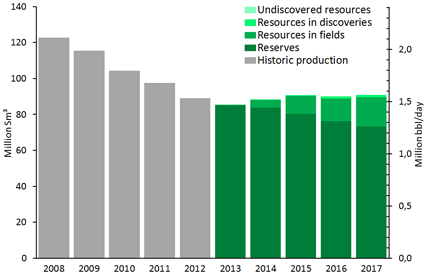