Easier to apply for geological samples

22/09/2014 It is now possible to use an electronic form to apply for a permit to take samples from cores, drill cuttings or fluids from exploration and production wells on the Norwegian shelf.

The purpose of the electronic form is to simplify procedures for both applicants and the NPD’s sample release committee.

Cores, fluids and drill cuttings from exploration and production wells are released two years after a well is completed. Until now, oil companies, consultant firms and research institutions that want to take samples of the released material from the Norwegian Petroleum Directorate have applied by email. That is no longer possible.

“Many of the applications lacked significant information, which led to unnecessarily long and difficult processing,” says Robert W. Williams, a geologist and one of the six members of the NPD’s sample release committee.

The applications submitted by email to the NPD had to contain a project description and information about sample types, sample size and intervals for each well applied for.

The new system simplifies the process by limiting the applicant’s options to just available wells, intervals and sample types.

Mandatory fields must be filled out before the application can be submitted – project description (maximum 400 words), number of grams per sample, number of samples in the stated interval, which analyses samples are used for, etc.

The applicant can also attach files that could be of interest in connection with the project. This could be sales brochures, detailed project descriptions or other documents that may be useful for assessing the project’s need for geological sample material.

When evaluating applications, the sample release committee emphasises whether the project will contribute to increasing understanding of the geology on the shelf. Access to the NPD’s samples is based on the assumption that the project is useful and relevant in relation to exploration, development and production. The size of the sample and quantity is determined based on how much material the NPD has in relation to the project’s need.

“We have the impression that interest increases when licensing rounds are announced, as well as when new areas on the Norwegian shelf are opened for petroleum activities,” he says. 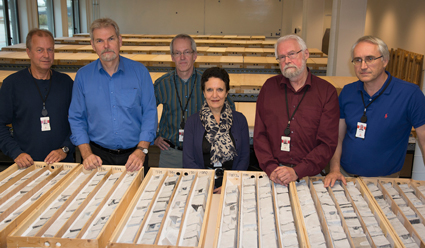