02/05/2014 This summer, the Norwegian Petroleum Directorate (NPD) will map the subsurface on the Mørerand High and Gjallar Ridge South in the Norwegian Sea, which is in the western part of the continental shelf. The objective is to acquire knowledge about unexplored acreage.

The so-called shallow drilling will reach up to 200 metres down into the subsurface, to rocks that were formed about 55-65 million years ago in the geological Cretaceous and Paleocene periods.

“Geologically speaking, this is a blank spot on the map,” says project manager Nils Rune Sandstå of the Norwegian Petroleum Directorate.

“The objective of the drilling is to learn what kind of rocks can be found there, and how old they are”.

The drilling target on the Mørerand High is located near the area where the continental plates separate from the oceanic crust to the west. Material from this area is therefore scientifically interesting. It will also increase understanding of the Møre basin as exploration acreage for future petroleum activities,” says Sandstå.

On the Gjallar Ridge South, the objective is to take samples from the geological layer above those examined by the Norwegian Petroleum Directorate last summer using a remotely operated underwater vehicle (ROV). This year’s surveys will therefore provide a more complete picture of the geology in the area.

The drilling operation in the Norwegian Sea is part of the mapping of the sea area between Norway and Greenland – a project that has been ongoing for many years. This year’s fieldwork will provide the answer to questions such as whether some of the rocks are sedimentary or volcanic.

The Mørerand High is located 49 miles west of Mosjøen. There is no fishing in the area, and according to the NPD’s project manager, the drilling will not result in any discharge of chemicals harmful to the environment.

“The Directorate has carried out shallow drilling in the Barents Sea before, at water depths between 300 and 400 metres. The drilling operations in the Norwegian Sea will be technically challenging due to the vast water depths. This places extensive demands on the vessel doing the job,” says Jan Stenløkk, operative supervisor for the fieldwork.

Following several tender rounds, the contract was awarded to the British company Fugro Seacore, which will use the specially equipped supply vessel Greatship Manisha. One of the Norwegian Petroleum Directorate’s geologists will join the ship’s crew, which will set sail from Kristiansund in early May. The work is expected to last three to four weeks.

The NPD has previously acquired seismic in parts of the area, and has been granted NOK 55 million from the fiscal budget for this year’s mapping. 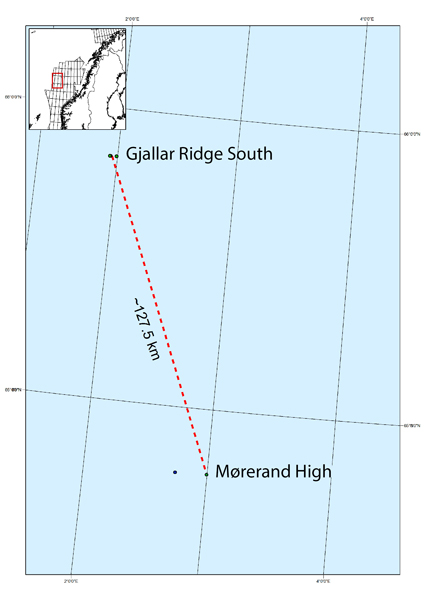