26/08/2014 Martin Landrø has been given the Norwegian Petroleum Directorate’s (NPD’s) IOR award for his work on developing 4D seismic for mapping, production management and monitoring of reservoirs.

Landrø is a professor of geophysics and seismic at the Department of Petroleum Engineering and Applied Geophysics at the Norwegian University of Science and Technology (NTNU).

Martin Landrø is internationally recognised for his contributions to the development of 4D seismic. “Time-lapse” or 4D seismic makes it possible to compare results from seismic 3D surveys carried out with time intervals, for example before a field starts producing, compared with various stages of the production phase. Time is the fourth dimension. 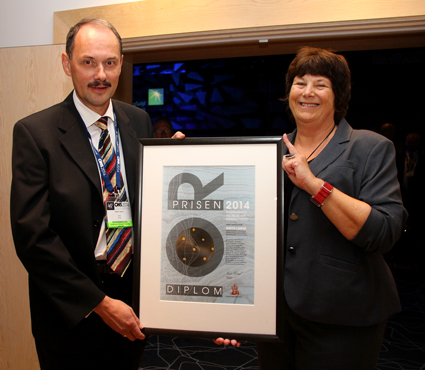 Director General Bente Nyland presented the award to Landrø during an event at ONS in Stavanger today.

"It is a great honour to receive the NPD’s IOR award. I was entirely unprepared when Director General Bente Nyland called," says Martin Landrø.

The technology makes it possible to see changes in the reservoir over time, and the data can provide information on local pressure changes and changes in the saturation of oil, gas and water.

This information is used to find the best targets for new wells, and to achieve the best possible production and recovery from the field.

“There is no question about Landrø’s integral role in this development. He was one of the pioneers behind the use of 4D seismic on the Gullfaks field in the North Sea,” says Director General Bente Nyland.

“He has also contributed to the application of the technology on many other fields on the Norwegian shelf.”

“Statoil estimates that use of 4D seismic on the Gullfaks field has generated value creation of NOK 6 billion. Value creation generated by 4D seismic is estimated to total more than NOK 22 billion over the last 10 years. (Source: Storting White Paper 28 (2010 – 2011), pg. 55 An industry for the future –  the Norway' petroleum activities)

4D seismic is also used to monitor reservoirs where CO2 is stored to detect potential leaks.

Landrø has a master of science from NTH (Norwegian Institute of Technology) from 1983, and earned a dr. scient. degree in physics in 1986. His scientific career started in 1986, while he was working for SERES, which was a major research collaboration within use of seismic data.

Landrø was the project coordinator for the EU research project ATLASS (Analysis of Time LapSe Seismic data). From 2005 to 2009, he was the project leader for a Research Council of Norway project for analysis for four-dimensional seismic data (PETROMAKS).

From 2009 and up to 2013, he headed a research project on improved mapping and monitoring of oil reservoirs.

Since Landrø started working at NTNU 1999, he has advised 77 master students and has been an adviser and co-adviser for 21 doctorate students. He is described as a skilled and inspiring lecturer who helps spread important knowledge to newly qualified engineers.

Martin Landrø has received a number of awards, both for his scientific work and for his ability to inspire and communicate. He has an extensive list of publications, and has given a number of presentations in and outside Norway.