12/05/2014 If you need quick access to facts about Norwegian oil fields, production, companies or wells, the Oil Facts app is your answer.

The new native app from the Norwegian Petroleum Directorate (NPD) and Ministry of Petroleum and Energy (MPE) is now available on all mobile platforms.

The app is individually tailored (native) for iPhone, Android and Windows Phone units. It was developed by the MPE and NPD on the basis of the annual fact booklet (www.faktaheftet.no), the NPD’s fact map and fact pages (www.factpages.no). 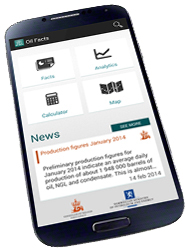 In addition to the mentioned facts, the app also includes news from the NPD and MPE and an analysis section where users can filter and sort data, as well as generate graphs.

The NPD is developing a new map system, which will be available at www.npd.no this summer. A beta version of the map is used in the Android and Windows Phone versions. The same map solution will be implemented in the iPhone edition as soon as the final map version is launched. This is scheduled for June.

The app was developed in collaboration with Capgemini.

The app is available on Google Play, Windows Phone Store and App Store.

Alternatively, you can find each version via www.npd.no; type ‘app’ in the search field.