15/01/2014 The high activity level in the petroleum sector is expected to continue, but without further growth. Robust activity in the next few years is mainly due to significant exploration activity and development of several discoveries – of which Johan Sverdrup and Johan Castberg are the largest – as well as a number of major and minor projects planned on fields in operation.

Investment growth is expected to end after more than a decade of increases. If the figures to reflect cost developments are adjusted, then somewhat reduced activity is expected. Up until now, the growth has been caused by increased activity and significant cost increases in various supplier markets. High oil and gas prices have led to an international economic upswing within the petroleum sector, resulting in substantial cost growth.

The high cost level, combined with uncertainty regarding oil and gas prices over the next few years, presents a considerable challenge for further development on the Norwegian shelf. This could pose a challenge in achieving sufficient profitability in projects on operating fields as well as for new field developments; a fact which may challenge the realisation of projects in the joint ventures. More stringent discipline in how companies employ capital due to required rates of return in the capital market is part of this picture. Therefore, we see a recent trend towards postponing more projects, which has led to a downward adjustment of the NPD’s investment forecast for the next few years compared to last year.

Investments for 2014 are expected to be NOK 176 billion, which is 3 billion higher than the preliminary figures for 2013 (see figure 2). They are expected to rise to about NOK 180 billion in 2015, and then remain around NOK 170 billion for 2016-2018 (see figure 1). Exploration costs come in addition, estimated to amount to slightly less than NOK 34 billion per year in the forecast period. This estimate assumes that 50 exploration wells will be drilled per year. 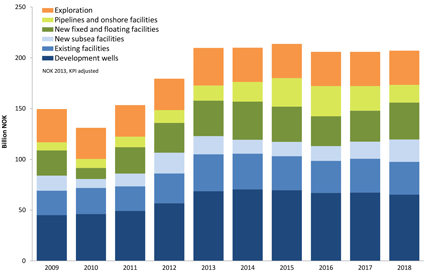 Estimated investments for the period 2016-2018 are reduced compared with the previous forecast (see figure 2). The decline is due to postponement of several projects. In addition, a new concept for Snorre 2040 has been selected, resulting in considerably lower investments over the next few years compared with the concept used as a basis for the previous forecast, even though the new concept entails higher investments overall. 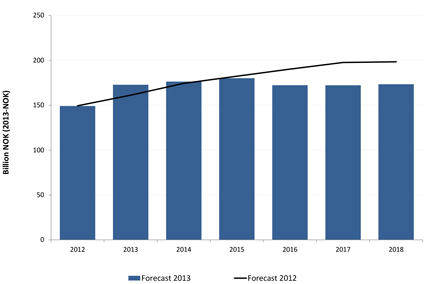 Investments on existing fields account for a substantial portion of the overall investments, and are estimated to be around NOK 90 billion in the next few years. The reason for the reduction in invest- ments on operating fields from 2013 to 2014 is mainly that investment projects on Eldfisk II and Ekofisk Sør have come to an end. As regards operating fields, drilling new production wells is the largest expense item, followed by modifications and further development of existing installations. In addition, there are plans for constructing new installations on several of the operating fields.

Thirteen new fields are being developed; three with floating installations and six with seabed in- stallations. The other four are subsea developments. This entails significant investments. For 2014, investments in these fields are estimated at more than NOK 65 billion. This figure is expected to decline rapidly as the fields start up. 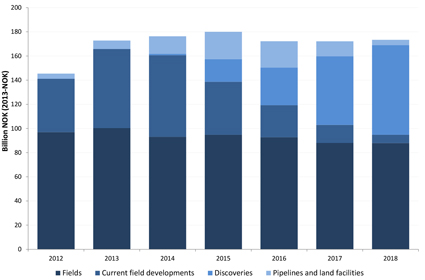 The estimated investments for 2018 range from NOK 150 billion to 190 billion, depending on whether the basis is current NOK, or the cost level in 2013-NOK. 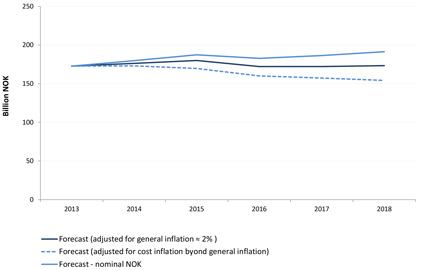 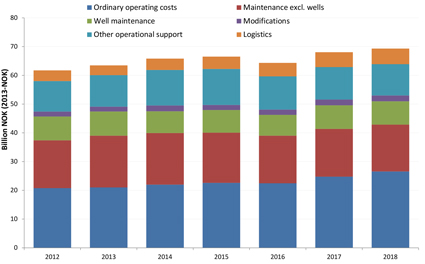 In addition to investments and operating costs, the NPD’s forecast also includes exploration, costs associated with shutdown and disposal and other general costs. With the exception of a small increase in 2014-2015, the overall costs are estimated at around NOK 290 billion. 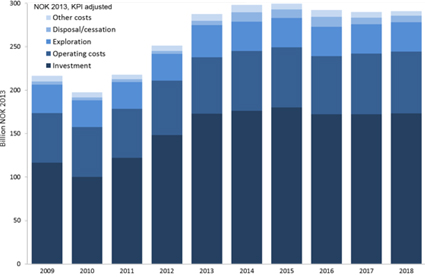 The investment forecast is based on the current price and cost scenario. Changes in these assumptions will mean changes in the investment level. This will also be the case if there are changes in the companies’ requirements for profitability in individual projects, in part as a consequence of stricter discipline in the use of capital.

Despite a substantial increase in oil and gas prices over time, the cost growth in various supplier markets has absorbed much of the upside. This has been an international trend which has also contributed to the high cost level on the Norwegian shelf. In 2005, the price of oil was around 55 USD/bbl. The average price in 2013 was double that. While it is difficult to make an exact estimate of cost growth in the Norwegian petroleum activities, a conservative estimate indicates an approximate doubling (see figure 7). This means that cost growth has been at least as strong as the increase in oil prices after 2005.

The high cost level has been a contributing factor to recent project postponements, where low profitability is cited as an important parameter. If oil and gas prices fall and costs remain stable or rise, this will have an impact on decisions to start-up new projects, and will entail lower investments than included in the forecasts. This applies both to development of new fields and for projects on fields currently in operation. If the opposite is the case, higher oil prices, combined with moderate cost growth, will contribute to a higher investment level. 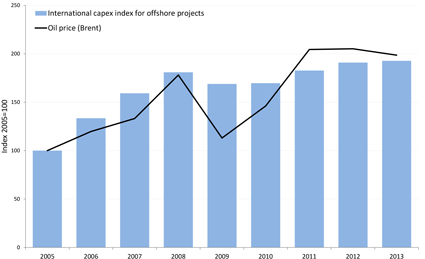 The number of new production wells is a considerable uncertainty factor for fields in operation. There are many reasons for this, but an important precondition for drilling more wells is building more new installations. If decisions regarding new installations are postponed, fewer new production wells will be drilled than assumed for this forecast.

Scarcity in rig capacity has previously limited the drilling of production wells on operating fields. A significant increase in new rig capacity on the Norwegian shelf has changed this. At present, the main challenge is the costs associated with drilling and wells, which is a consequence of the previous shortage of rig capacity. 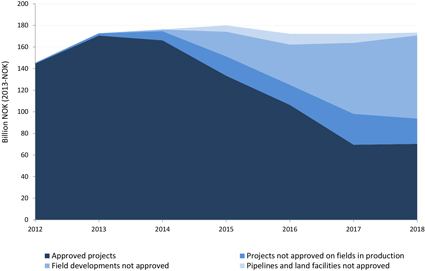