Total production of petroleum in 2014 is estimated at 215 million Sm³ o.e, about one-half per cent higher than in 2013, but is subsequently expected to increase slowly. 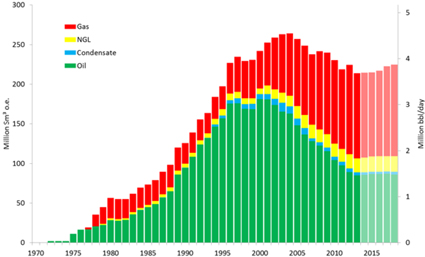 The forecast in figure 2 shows a stable production level, followed by a return to a gradual increase in gas production. 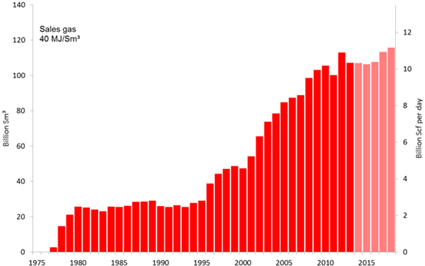 Last year’s oil production was 0.6 per cent lower than the Norwegian Petroleum Directorate’s autumn 2012 estimate. Production fell by slightly less than five per cent from 2012 to 2013, but the decline is somewhat less than in recent years.

For 2014, the NPD estimates that the decline in oil production will stop, and we expect a small increase to 85.5 million Sm³ (1.47 million bbls per day). Current expectations are for relatively stable oil production in the next few years. The estimated uncertainty in 2014 is +18/-18 per cent. The uncertainty is particularly linked to the reservoirs’ ability to deliver, drilling of new production wells, start-up of new fields and regularity of the fields in operation. 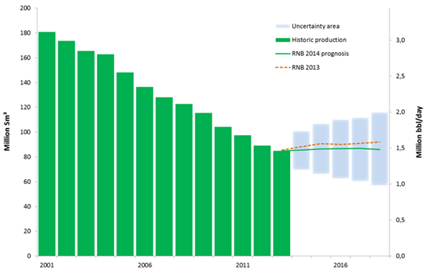 For 2014, production of condensate and NGL is forecast at volumes of 3.2 million Sm³ and 9.9 million tonnes, respectively. Total liquid production is therefore estimated at 108 million Sm3 o.e. (1.85 million bbls o.e. per day).

The table below shows the production forecast divided by the various products for the next five years.

Estimated oil production is expected to reach 432 million Sm³ in the period 2014-2018, which is 59 million Sm³ less than in the previous five-year period. The oil production is expected to come from fields in operation or from fields approved for development. This includes improved oil recovery measures on these same fields. Production that has been approved accounts for 91 per cent of the volume in the five-year period. 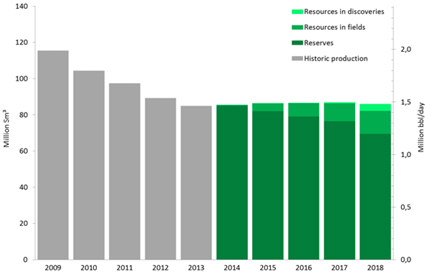