12/01/2015 Fridtjof Riis (b. 1954) has been awarded the Brøgger Prize for 2015. Riis received the prize for his cutting-edge technical contributions to Norwegian geology, and geoscience in general. 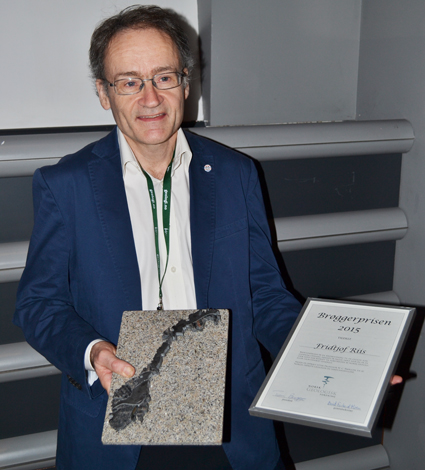 Fridtjof Riis (b. 1954) has been awarded the Brøgger Prize for 2015. Riis received the prize for his cutting-edge technical contributions to Norwegian geology, and geoscience in general.

Riis is a senior geologist at the Norwegian Petroleum Directorate. He studied at the University of Oslo and Stanford University.

The Brøgger Prize (Geological Survey of Norway’s honours award) was named after Professor W. C. Brøgger, one of Norway’s foremost geologists and social scientists. Riis accepted the prize at the Winter Conference in Stavanger today, 12 January.

“There is no way to prepare for receiving such recognition,” says a passionate Fridtjof Riis.

“This would not have been possible without the good cooperation I have enjoyed with others. It is through collaboration that you achieve good results.”

Riis is a rare geologist  whose interest in mathematics and physics, plants and animal life matches his passion for geology. He has conducted extensive and award-winning popular science communication, and has served as a mentor for a number of geologists, according to the grounds for the award.

Fridtjof Riis’ efforts span work on the mainland as well as on the Norwegian shelf. His work within regional models for uplift and erosion is ground-breaking. He has contributed to a new understanding of how Norway was exposed to large-scale uplift in the Cenozoic Era, and thus a better understanding of the shelf geology and petroleum systems.

He has also worked on basin modelling, Cenozoic stratigraphy on the shelf, seabed stability in the Storegga slide area and CO2 storage. His current work includes segmenting of petroleum fields with regard to pressure and flow properties.

The 60-year-old prize winner has also found a crater. His theory regarding meteorite impact at Ritland in Hjelmeland was confirmed in 2008 when shocked quartz was confirmed as a result of cooperation with scientists from the Department of Geosciences at the University of Oslo.