50th anniversary of the first licensing round

The objective of the resolution was to ensure thorough exploration and secure sound financial return for the country. It furthermore aimed to ensure public control and prudent exploitation of the resources, as well as ensure that the activities did not result in disadvantages for other activities or impede prudent technical safety.

"The assessments made at the time were sound. They had a clear vision of how any potential resources, and management thereof, would benefit the Norwegian people," says Director General Bente Nyland.

The licensing rules established a long-term perspective and the concept of "hurry up slowly". Important principles included Norway developing its own expertise, and learning from well to well. The rules also emphasised the necessity of having competent stewardship and stable framework conditions.

"This slow, incremental opening of the shelf means that, 50 years later, we have yet to reach the halfway point of the resources we believe are in place," says Nyland.

The actual licensing round was announced on 13 April 1965. A total of 278 blocks were included in the announcement, and this round remains the single most extensive in Norwegian oil history. Virtually the entire block system south of the 62nd parallel was announced.

Norway's sector of the continental shelf includes a total of 315 blocks or parts of blocks. The only blocks excluded in the first licensing round were those that bordered the median line toward Denmark and Sweden.

The application deadline was in June of the same year. When the deadline expired, there were eleven applications on the desk of Jens Evensen, the chair of the newly formed State Oil Council, a body which would have "recommending authority in all cases relating to exploration and exploitation of subsea petroleum deposits on the Norwegian continental shelf".

The applicants expressed interest in a total of 81 blocks, 78 of which were awarded to 9 companies.

Esso's discovery of traces of hydrocarbons in Balder in production licence 001 (block 25/11) in 1967 attracted attention. The main field was discovered in 1974, and started production in the autumn of 1999.

“If the operator Esso had had access to the data that was available in 2010, the well could have been drilled in a different location – and then Johan Sverdrup would have been the first commercial oil discovery on the Norwegian shelf,” says Bente Nyland.

Instead, Ekofisk became the first commercial discovery, after 33 exploration wells. The discovery was made in 1969. 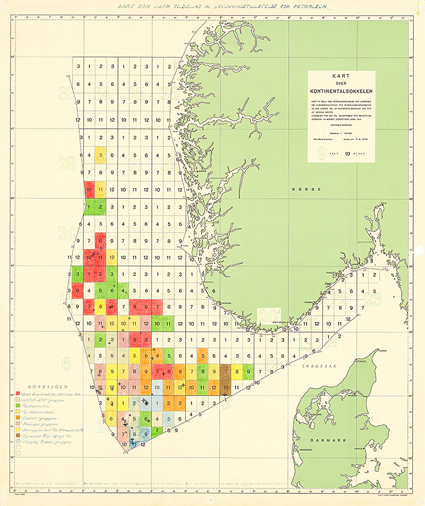