Consent for start-up of Goliat

09/09/2015 The Norwegian Petroleum Directorate has granted the licensees of the Goliat oil field (production licence 229) consent for start-up of their field facilities and production.

“Goliat is the first oil field to be developed in the Barents Sea and is thus an important step in the further development of this petroleum province. The project has encountered considerable challenges along the way, but the Norwegian Petroleum Directorate is now looking forward to production start-up and a long operation phase,” says Øyvind Kirkhus, assistant director of field development and operation.

“We applaud the licensees for their courageous decisions and look forward to a continued good cooperation.” 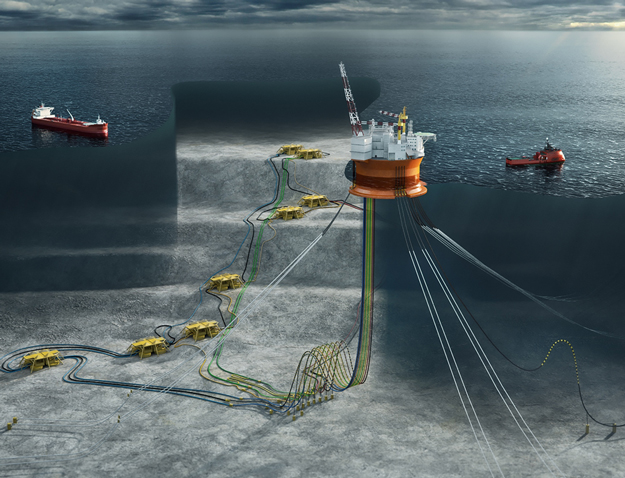 The field has been developed with a circular, floating facility with integrated storage and offloading systems (FPSO), fixed in place with anchors. This is a new type of production facility on the Norwegian shelf. The facility will be supplied with power from land via a 100 km long sea cable. The production systems on the seabed consist of eight templates, each with four well slots and associated systems, pipelines and risers for production and injection, as well as cables used to control valves and distribute chemicals.

Goliat is an oil and gas discovery in production licences 229 and 229B (link to the Fact Pages) in the southwestern part of the Barents Sea, about 85 km northwest of Hammerfest. Eni Norge is the operator with an ownership interest of 65 per cent, Statoil is a licensee with a 35 per cent interest. The sea depth in the area is 320 - 420 metres.

The development plan for the field (PDO) stipulates production of hydrocarbons from the Realgrunnen and Kobbe reservoirs. The recoverable oil reserves from these reservoirs are estimated at 28 million Sm3 of oil.

The gas will be injected for pressure support in the initial phase, but is planned be exported later on. When that will happen depends on how production develops and the establishment of transport solutions. Recoverable gas reserves are estimated at around eight billion Sm3.

Final consent to start production is also contingent on securing approval from the Petroleum Safety Authority Norway and the Norwegian Environment Agency.