Johan Sverdrup - in the company of giants

13/02/2015 Johan Sverdrup was proven in two stages, but it was clear from the start that this was actually one gigantic oil discovery. Ranked by size, it is number five on the Norwegian ranking list.

First out was Lundin, which in 2010 made a discovery they called Avaldsnes. I 2011, Statoil proved Aldous, and Aldous/Avaldsnes was ranked as the world's largest discovery that year.

Johan Sverdrup is in a mature area in the eastern Utsira High. The area was awarded in the very first licensing round on the Norwegian shelf in 1965. It has seen a number of different "owners" or licensees over the years, and many exploration wells have been drilled there. But only after exploration results from the western Utsira High indicated functioning petroleum systems, was Johan Sverdrup proven by Lundin with discovery well 16/2-6 in production licence 501 in September 2010. The license was awarded in APA 2008. Between 2010 and February 2015, a total of 21 appraisal wells and eight geological sidetracks have been drilled on Johan Sverdrup.

As big as Northern Jæren

Johan Sverdrup is large, both in resources and extent. When the companies reported their resource figures in the autumn of 2014, they stated that recoverable resources in the field total 370 million standard cubic meters (Sm3) of oil equivalents. The field covers about 200 square kilometres, which corresponds to the combined size of the Rogaland municipalities Stavanger, Sola, Randaberg and part of Sandnes. In other words, it covers an area the size of Northern Jæren.

The reservoir in the Johan Sverdrup discovery is located about 1800 metres under the seabed, and can be described as a relatively flat geological landscape, split into various hills, terraces and basins. The reservoir sand has varying thickness, from a few metres up to 60 metres. "Most of the sand has very high permeability, which means that the recovery rate could exceed 60 per cent," says senior geologist Fridtjof Riis in the Norwegian Petroleum Directorate. He has worked on Johan Sverdrup since the first discovery well.

"Its enormous size makes Johan Sverdrup an extremely important discovery. This is why the NPD has made its own resource assessment," he says.

"We geologists have interpreted seismic data, examined well results and have made a separate geomodel on this basis. Such a model allows us to gain a good understanding of the reservoir, and has been used in communication with the licensees."

The model has also been used as documentation in the studies the NPD reservoir engineers have conducted to consider alternative drainage strategies and methods for improved recovery.

"Opportunities to work on something this big are few and far between." 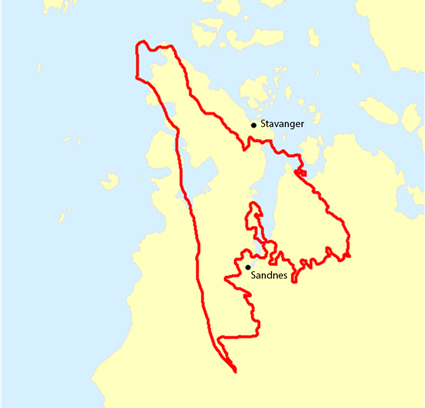 Johan Sverdrup covers an area the size of Northern Jæren