13/02/2015 Today, 13 February, the Plan for Development and Operation (PDO) for the Johan Sverdrup field was submitted to Minister of Petroleum and Energy Tord Lien. 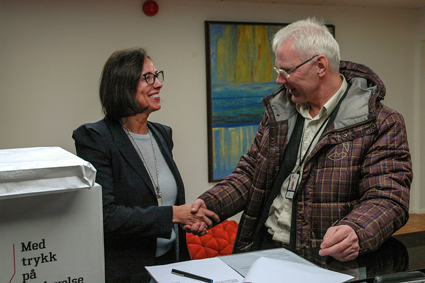 The Plan was also submitted to the Norwegian Petroleum Directorate, which will review the Plan before sending it to the Storting (Parliament) for processing.

The development will be one of the biggest industrial projects in Norwegian history. The oil discovery is the fifth largest ever made on the Norwegian shelf, and it will be developed in multiple stages. The PDO covers the first stage of construction, with overall investments estimated at NOK 100 – 120 billion.

The NPD has taken a very active interest in Johan Sverdrup from the first discovery well. According to Kjetil Aasoldsen, assistant director of the NPD responsible for fields and developments in the southern part of the North Sea, the Directorate has closely monitored the delineation of the field and all phases of the project development leading up to the PDO.

"It is important to the NPD that the licensees choose a development solution that yields maximum value creation for society. The most important factor for us in the work on Johan Sverdrup has revolved around understanding the subsurface, and viewing production and increased recovery in a long-term perspective".

Statoil is the operator on Johan Sverdrup, and the other licensees are Lundin, Petoro, Det Norske and Maersk. The field comprises three production licences (PL 265, 501, 502). The first oil discovery well was drilled by Lundin in PL 501, awarded in APA 2008.

"We have worked closely with the licensees in all of our discussions, and we have also made it very clear what we expect of them. An important point for us has been that they must learn from previous major developments on the Norwegian shelf," says Aasoldsen, adding that the NPD takes part in meetings in the various committees in the project, and in meetings with the licensees.

"In those cases where we were not satisfied with the work done, we have requested reasoning, studies and analyses," he says.

The topics receiving the NPD's scrutiny include securing flexibility, future business opportunities and improved recovery. In the first stage, flexibility for future measures for improved recovery has been included. For example, the NPD believes that injection of polymers is a method that could be used on the field.

"This method is rarely used on the Norwegian shelf, but we believe there is a major potential here on Johan Sverdrup. The NPD will focus on this in the assessment of the PDO for the first development stage, and in the work on future field development stages," says Aasoldsen.

"The large fields have the economic backbone to drive development of technology that can subsequently be used on other fields. Therefore, the NPD has great expectations for Johan Sverdrup as regards the use of new technology."

Electrification of Johan Sverdrup has sparked significant debate. The Storting has decided that the field will be developed with power from shore, and that an area solution for the other fields on the Southern Utsira High will be in place no later than by start-up of development phase two in 2022.

In tandem with reviewing the PDO for the first phase of the development, the NPD has also started to follow up the work on the remaining construction stages.

Read more: Johan Sverdrup - in the company of giants >>