Oseberg West Flank to be developed

18/12/2015 Today, December 18, Statoil and its partners has submitted a Plan for Development and Operation (PDO) for Oseberg Vestflanken 2 in the North Sea.

The new development will consist of an unmanned wellhead facility which will both recover oil and gas from new deposits and improve the recovery rate from other producing deposits.

The development cost is projected at NOK 8.2 billion, and makes it possible to recover 17.6 million standard cubic metres of oil equivalents (approx. 110 million barrels o.e). Oil accounts for nearly 10 million cubic metres (63 million barrels) of the reserves; the rest is gas. The reservoirs are located between 2400 and 3100 metres below the sea surface.

The facility may be described as a seabed installation lifted up above the sea surface. This means easier access to the wellheads for maintenance and potential future adaptations.

Tomas Mørch, assistant director for the North Sea North in the Norwegian Petroleum Directorate (NPD), has deemed Oseberg Vestflanken 2 to be a good project for further development of the area: “I think it’s positive that the Oseberg licensees have decided on a project for improved recovery in these demanding times.”

The NPD encourages companies to consider unmanned wellhead platforms more often in relation to seabed developments, when development decisions are made.

The Oseberg Vestflanken 2 will be developed with a simplified, unmanned wellhead facility with ten well slots. Two of these will be used to inject gas to improve oil recovery. Two production wells will also be drilled from an existing subsea template on the Vestflanken. Further injection will take place by obtaining gas through a new pipeline from the existing gas injection system in the area. The wells on Vestflanken 2 will be operated from the Oseberg field centre, where the oil and gas will also be processed.

The facility will be built without a helicopter deck, lifeboats and accommodation facilities. Personnel who perform maintenance will be brought on board from vessels equipped with a gangway. Such a solution is novel on the Norwegian shelf, but has been thoroughly tested e.g. on the Danish and Dutch shelves. This type of development solution is appropriate for depths of up to approx. 150 metres, and the solution may therefore also be relevant for several of the many minor discoveries for which development decision have not yet been made.

Statoil and its partners Petoro, Total and ConocoPhillips have booked a dedicated, simplified, jack-up drilling facility (Cat J rig) to drill the wells.

Production start-up is scheduled for the second quarter of 2018. 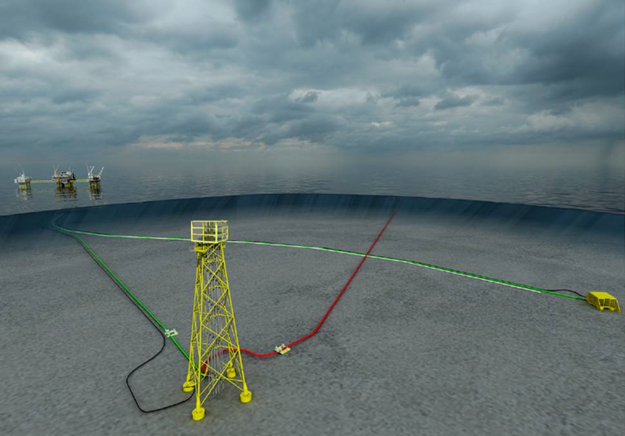 This is how the developers envision the solution with an unmanned wellhead facility.
The Oseberg field centre is in the background and the seabed facility on the Vestflanken
can be seen on the right.
(Illustration: Statoil)

Oseberg Vestflanken 2 will be developed with a simplified, unmanned wellhead facility with ten well slots.