27/08/2015 On 22 August, Yngve Kristoffersen and Audun Tholfsen returned to Longyearbyen after completing a feat no one has done since Nansen and Johansen - spending the winter alone in the central Arctic Ocean. 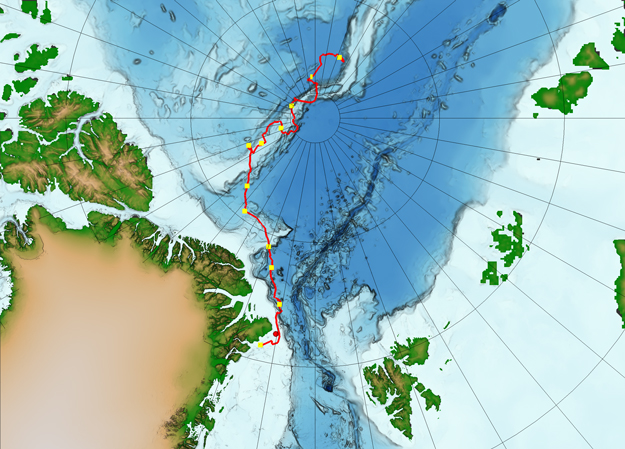 Map of the central Arctic Ocean with the expedition route in red. The first day of each month is marked with yellow points.

This was to the day 119 years after Nansen and Johansen returned from the Fram I expedition in 1896.

The foremost polar researcher of our time, Professor Yngve Kristoffersen and his very experienced polar colleague, Audun Tholfsen, spent the winter alone in the central Arctic Ocean to do polar research. The two are polar researchers at the Nansen Environmental and Remote Sensing Centre (NERSC) and the University of Bergen. 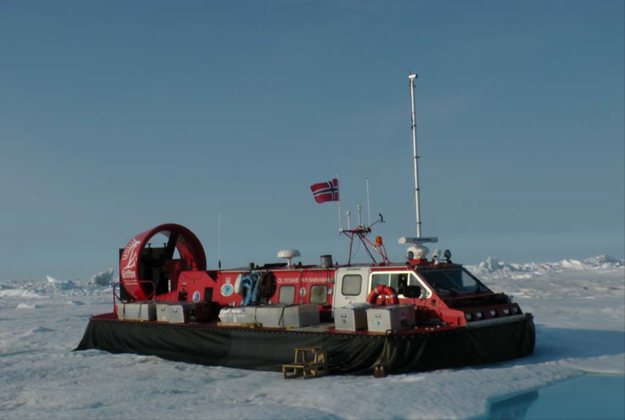 However, the technology is different. This time, the wooden ship Fram and Nansen's two kayaks had been replaced by the hovercraft Sabvaaba. which in Inuit means "floats quickly above".

On 31 August last year, Sabvaaba  and the two researchers were placed on the ice near the North Pole by the German research ice breaker Polarstern. With them, they had scientific measurement equipment and supplies for 1.5 years. The 2014/15 Fram expedition was under way. On 18 August this year, the remaining equipment was picked up from what was left of the ice floe by the sealing vessel Havsel. It then returned to Longyearbyen in Svalbard together with Sabvaaba.

In the meantime, the 2014/15 Fram expedition had an adventurous, and at times, rough, journey. They crossed the Lomonosov ridge a whopping five times, and then the Morris Jesup plateau north of Greenland for good measure.

Most of this route passes through the most inaccessible areas of the Arctic Ocean. Here, the ice is so thick that you need a nuclear icebreaker to get there. Unless you happen to have a hovercraft.

But even with a nuclear icebreaker it is virtually impossible to collect seismic data there. As a result, the 1 000 kms of good seismic collected by the 2014/15 Fram expedition using their ice drift technique is a unique data set. In addition to the seismic data, the expedition also collected almost 2 000 kms of a number of other data from air, ice, and water.

The data set from the 2014/15 Fram expedition will be one of the most important Arctic Ocean references in many disciplines for years to come. The seismic data collected from the Lomonosov Ridge and the Morris Jesup plateau will provide new knowledge of the geological development of the northern marine on the Barents Sea shelf .

The Norwegian Petroleum Directorate has been one of the sponsors of the expedition. 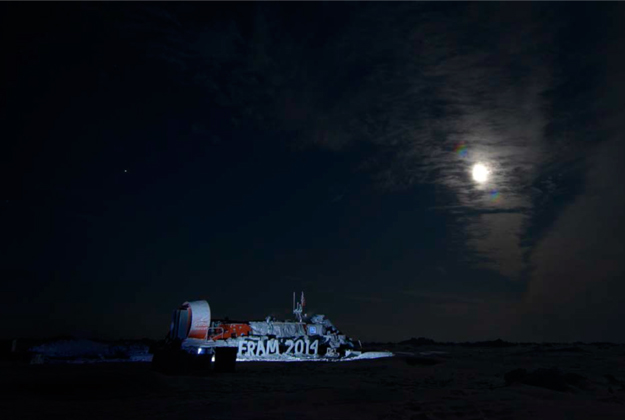