This represents a slight decline from 2013. 6.4 billion Sm3, or 45 per cent of the total resources, have been sold and delivered.

The total recoverable petroleum resources have decreased by 21 million Sm3 o.e. (0.15 per cent) since 2013. The reason for the decline is that 12 of the discoveries in the previous accounts have been reassessed, and are now considered to have a low likelihood of development.

The part of the remaining, proven, recoverable and saleable volumes for which development decisions have been made or which are already in production, is called reserves.

This year's reserve growth totalled 13 million Sm3 o.e., compared with 102 million Sm3 o.e. in 2013. This growth can primarily be explained by the submission of one Plan for Development and Operation (PDO) in 2014, for the 34/10-53 S Rutil discovery in Gullfaks Sør.

The reserve growth for oil was 40 million Sm3, and the gas reserves were reduced by 17 million Sm3 o.e. There was also a decline in the associated liquid products. The Troll, Grane and Ivar Aasen fields contributed the most to the reserve growth for oil. The cause of the reduction in gas reserves was, among other things, greater uncertainty surrounding the implementation of subsea compression on Ormen Lange, so this project was therefore removed from the reserves.

* Production on Heimdal officially shut down in November 2011, but it is still in operation as a processing centre for several fields.

Contingent resources include proven petroleum volumes that are contingent on clarification and decisions before they can be approved for production.

Figure 1 shows the distribution of the total resources. The resource estimates are uncertain; this is also illustrated in the figure. The total remaining recoverable resources have been estimated at 7.7 billion Sm3 o.e., with a range of uncertainty (P10 - P90) between 5.4 and 11.3 billion Sm3 o.e. 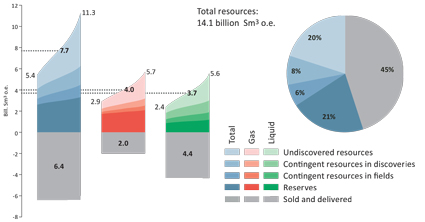 Figure 1: Distribution of the total recoverable resources and uncertainty in the estimates as of 31 December 2014.