15/01/2015 The high cost level in the petroleum industry has gradually become a major challenge. The decline in oil and gas prices in recent months has further emphasised the sector’s profitability challenges.

Significant remaining petroleum resources on the Norwegian shelf provide a basis for continued high value creation and high activity level for many years to come. This value creation assumes a price and cost level which makes it possible to define new profitable projects - both on operating fields as well as new field developments.

The petroleum industry is in a consolidation phase following a decade of strong growth. Lower oil and gas prices may contribute to the initiation of necessary readjustments to ensure profitability over the longer term. Although this may translate into reduced profitability and lower activity in the short term, the price decline could contribute to a long-term and profitable Norwegian petroleum sector. If the considerable price decline should be more prolonged without a reduction in cost level, this could have a significant negative impact on the activity level in the petroleum sector over time.

These forecasts have been prepared under the prevailing assumptions for the autumn of 2014. It is assumed that the projects that have been placed on hold will be implemented at a later date. If the oil price should remain at USD 50-60 per barrel over time, this will result in additional reductions in investments and exploration costs.

Figure 1: Development in investments including exploration costs and oil price

Many investment decisions that will come into force in 2015 have already been made, and the potential for further reduction is therefore moderate. The uncertainty in these forecasts naturally increases over time, but if the oil price over time remains at USD 50-60 and the companies use this low price for investment decisions, the investment level could decline even further, starting in 2016.

The developments in oil and gas prices and cost level in the industry are closely linked. The investment estimates the operating companies have reported to the Norwegian Petroleum Directorate, which also form the basis for the investment forecast, include a stable to slowly rising cost level over the next few years. Reduced costs will therefore directly affect the investment forecast through a lower cost level at the project level, but also indirectly in that more projects will be profitable at a given product price. In addition to a lower cost level as a result of lower prices in different supplier markets, a low oil price over time may also contribute toward streamlining and technological development and thus reduced costs. This forecast has only marginally included these effects.

INVESTMENTS
Total investment estimates
Investments in 2015 have been estimated at NOK 147 billion, NOK 25 billion lower than the preliminary figures for 2014 (see figure 2). They are presumed decline further to about NOK 135 billion in 2017, and will then gradually rise in subsequent years (see figure 2).

Investments in existing fields amount to a substantial share of total investments and are estimated at between NOK 70 and 80 billion over the next few years. Following a peak in 2013, there has been a substantial reduction in investments in producing fields. This is due to major projects such as Ekofisk Sør, Eldfisk II, new compressors on Troll and Åsgard subsea compression having reached the completion phase without equivalent new major projects having been initiated.

At the end of last year, 11 fields were under development, three with floating facilities and five with facilities resting on the seabed. The other three are subsea developments. This is a record-high number and leads to considerable investments. Investment figures for 2015 for these fields are estimated at approx. NOK 60 billion, and will then decline rapidly as these fields come on stream.

The forecast presumes that there will be relatively few new field development decisions over the next few years. The majority of these investments are linked to the development of Johan Sverdrup.

Compared with the forecast published on the shelf in 2013, these investments are considerably lower. Investment estimates for the 2015-2019 period have been reduced by NOK 175 billion compared to last year's forecast. This is due in part to lower investments in producing fields than was presumed last year and in part to project postponements for new field developments.

Figure 3 shows the investment forecast divided by different main investment categories. The reduction in investments from 2014 to 2015 is primarily within operational investments/modifications on producing fields. The resource consequences of this over time are uncertain. There is also a reduction in well investments. This is linked to the fact that many major field projects are in the completion phase, without new projects being initiated.

The investment estimates in figure 3 show considerable investments in mobile facilities and facilities resting on the seabed. These are linked to ongoing field developments and the development of Johan Sverdrup. 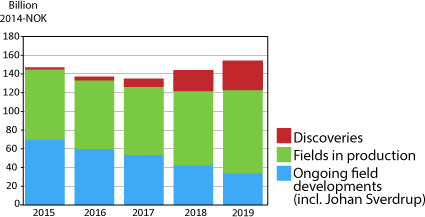 The potential for further reduction in field investments is found in reduction and/or postponement of modification investments. This could also mean that improved recovery projects become more difficult to implement. The production of reserves could also be affected, as decided measures may be reconsidered. The drilling of new development wells is key for many of these projects.

There are significant variations in the profitability of development wells; from wells that are profitable at a very low oil price to wells that require an oil price of up to USD 70 per barrel. If an oil price as low as USD 50 per barrel is used as a basis for drilling decisions, a substantial number of wells will be deemed unprofitable. The effects of a lower oil price for the drilling of new wells are complicated by existing rig contracts and the length of contract periods. 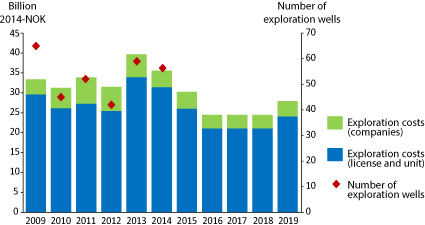 Figure 6: Estimate of exploration costs. Historical figures for 2011-2014, followed by a forecast.

Going forward, exploration activity is surrounded by considerable uncertainty. The activity will, among other factors, depend on the oil price development, how many discoveries are made and their size.

OPERATING EXPENSES
At the end of 2014, 78 fields were in production. Operating costs are expected to remain relatively stable around NOK 65 billion over the next few years (see figure 7). The ordinary operating costs, maintaining facilities and well maintenance amount to the majority of operating costs.