Overall petroleum production in 2015 is presumed to total 215.6 million Sm³ o.e, somewhat lower than in 2014, and will then remain relatively stable. 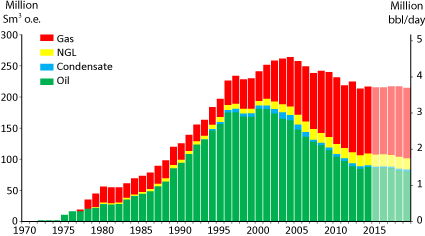 The prognosis in figure 2 shows a stable production level, followed by a gradual increase in gas production. 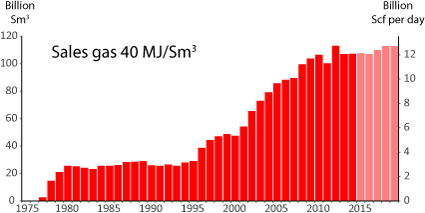 Last year's oil production was 2.3 million Sm³, nearly three per cent, higher than the Norwegian Petroleum Directorate's (NPD's) projections from the autumn of 2013. Production increased by three per cent from 2013 to 2014.

The production decline was expected to reverse in 2014. The reasons for this are the completion of multiple major projects on producing fields, drilling of wells and start-up of new fields in 2014. Fields that were scheduled to come on stream in 2014 started production somewhat later than reported in the autumn of 2013, but in return, many of the established fields have had greater success than expected with their drilling campaigns in 2014. There are also indications that regularity on the fields has been better than before.

The definition of the sales product from the more mature fields that have supplied condensate to Kårstø has also changed. In connection with starting production on Gudrun, the sales product was redefined to an oil (Gudrun blend). This has resulted in a sale of 0.77 million Sm³ of oil, which was not included in the forecast for 2014. The change has no financial impact, as the volume of condensate saw a comparable reduction compared with the forecast.

The NPD predicts that oil production in 2015 will be somewhat lower than in 2014, 86.3 million Sm³ (1.49 million barrels per day). Oil production is expected to remain relatively stable in the years to come, but is expected to decline somewhat more than was assumed in the previous forecast. The uncertainty in 2015 is estimated at +/- 12 per cent. The uncertainty is particularly related to the start-up of new fields, the reservoirs' ability to deliver, drilling of new development wells and the regularity of the fields in operation. 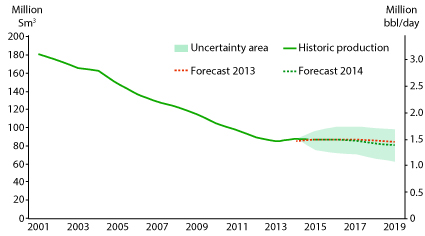 Forecasts for production of condensate and NGL for 2015 have also been prepared, 2.1 million Sm³ and 10.3 million tonnes, respectively. Total liquid production has therefore been estimated at 108 million Sm3 o.e. (1.86 million barrels o.e. per day).

The table below shows forecasts for production distributed over the various products for the next five years.

Oil production during the 2015-2019 period is projected to reach 422 million Sm³. This is 42 million Sm³ less than in the previous five-year period. This oil production is expected to come from producing fields or from fields which are approved for development. This includes improved recovery measures on the same fields. Production that has been approved, accounts for 94 per cent of the volume in this five-year period.

These forecasts have been prepared under the prevailing assumptions for the autumn of 2014. If the price level remains much lower over time, this will most likely have an impact on the activity level and thus also production.

Over the short term, this could make improved recovery projects, shown as resources in fields in figure 4, more difficult to implement. The production of reserves could also be affected, as approved measures may be reconsidered. If this is the case over the somewhat longer term, decisions on new field developments could be further postponed.