17/04/2015 Yesterday, the Minister of Petroleum and Energy marked the official opening of the Statoil-operated Valemon field in the North Sea.

“The Norwegian Petroleum Directorate wants the resources on the shelf to be realised. Valemon contributes to value creation and activity,” says Ingrid Sølvberg, director of development and operations in the NPD.

The Valemon gas and condendate field is located in blocks 34/11 and 34/10 just west of the Kvitebjørn field at a water depth of 135 metres. The field was developed with a production facility resting on the seabed for separation of gas, condensate and water. Valemon is supplied with electricity from the Kvitebjørn field with a subsea cable.

The facility will normally be unmanned and will be remotely controlled from shore when the drilling operations are concluded.

Valemon came on stream in January of this year with three producing wells. A total of ten production wells are planned. The field is produced with pressure relief. The reserves are estimated at about 192 million barrels of oil equivalents.

Condensate from Valemon is transported by pipeline via Kvitebjørn to Mongstad in Hordaland County. The rich gas is transported to Heimdal and then on by pipeline to the UK and the Continent. From Valemon to Heimdal, the gas is transported in the pipeline which was previously used for gas export from the Huldra field before it was shut down in 2014. According to the operator, investments in Valemon will total about NOK 22.6 billion when all wells are fully drilled. The development was completed without major delays and cost overruns. 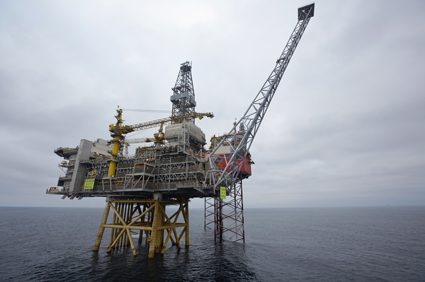