Five billion barrels of oil and gas from the Statfjord field

Director General Bente Nyland attended the celebrations at Statoil’s office. The following is a summary of her speech:

Dear everyone and especially everyone who has worked in the Statfjord organisation. Congratulations on this major milestone.

Five billion barrels of oil and gas from one field puts Statfjord in a unique position. This amounts to about 12 per cent of the total Norwegian production of oil and gas since the very beginning and until the turn of the year.

Though the current production level is much lower – about 100 000 barrels of oil equivalents per day – as of July only ten of the 82 fields on the shelf produced more oil and gas overall than Statfjord.

The field has turned out to be highly resilient. From having an estimated lifetime until the mid-1990s, the plan for Statfjord Late Life in 2005 was to produce until 2012. And here we are today – with every indication that Statfjord will continue operating until the mid-2020s. I would not be surprised if the field also surpasses this date.

There are many stories behind the success of the Statfjord field – I firstly want to talk about the efforts to improve recovery and events where the Norwegian Petroleum Directorate has played a strong role.

There are many – also in the NPD, who have enjoyed exciting technical tasks related to the development and follow-up of the field. Those who were responsible for the first phase are now retired – but their eyes still light up when they talk about those early years.

At the end of 1979, just five years after the discovery well, production started from a platform that was originally intended for the Beryll field on the UK side.

The Statfjord field is a good example of excellent interaction between the authorities and oil companies from day one.

A key success factor is that both parties must have expertise and capacity – as well as the ability and willingness to communicate to find solutions that will benefit the owners and society.

It is important for the NPD to ensure that there is room for potential future improved recovery measures, even as early as in the planning phase for a development. This rule was in effect when we started developing the Norwegian shelf. And it still applies today. Johan Sverdrup is an example of this.

One of the early, but vital decisions involved selecting the correct depletion strategy. Following many discussions between the companies and the Norwegian Petroleum Directorate – the strategy chosen was one that would also ensure good production in the field’s late life. Water was injected in Brent, the good upper reservoir, and gas was injected in the lower Statfjord, to maintain control throughout the production course.

Work was also underway on the Statpipe pipeline, another important milestone that was timed deliberately to reduce the risk of losing gas resources. Statpipe would transport the gas from Statfjord to Kårstø before it was transported on to Europe.

At the time, fully documented technology was not available for crossing the deep Norwegian Trench with pipelines, and there were many sceptics. However, this did not prove too big a challenge for Norwegian engineering – as evidenced by the many engineering feats on the shelf.

Statpipe was – and continues to be important for our extensive infrastructure for exporting Norwegian gas.

The regulations that prohibited flaring of gas came into place all the way back in the 1970s. Like now, these regulations only permitted flaring when necessary due to safety.

Since there was no established scheme for the transport and sale of gas at the beginning, the solution was to inject it back into the subsurface, which helped maintain the pressure in the reservoir, and to wash out the oil that needed a bit of a push to come out.

Statfjord is one of three fields with the highest levels of gas injection – and a quick equation reveals that between five and ten per cent more oil has been produced as a result of this. And, as is the case with injected gas, most of it can be produced when there is no longer any profitable oil left to pump out.

Since Statfjord is a border field, there needed to be an agreement with the UK to split the field. The treaty between Norway and the UK stipulates that if a field extends across the border, an attempt must be made to arrive at a shared and efficient exploitation of the deposit. The allocation formula is determined by how much oil is originally in place in the respective countries.

Due to the size of the field, even minor miscalculations could have enormous economic consequences, which led to long, costly and painfully exacting calculation processes.

When the first negotiations were finalised in 1976, it was determined that 88.88470 per cent of the field belonged to Norway.

The Norwegian ownership interest dropped to 84 per cent in 1979, and it was finally set at 85.46869 per cent in 1994. Decimals are vital when substantial assets and income are at stake!

The Norwegian Petroleum Directorate played an active role in the negotiations with the UK authorities. It was not an easy task for anyone, particularly the Brits, who had accepted the median line principle despite the fact that the law of the sea could have given them the rights to the Norwegian Trench, given a different outcome for the boundary setting.

As Director General of the NPD, I would be remiss to leave out the famous letter from the Norwegian Petroleum Directorate to Mobil regarding the Statfjord B platform, which is called Norway’s most expensive letter. In parallel with the field development plan in the mid-1970s, work was under way on planning yet another platform on the field, Statfjord B – along the same lines as Statfjord A.

The NPD found this unacceptable for safety reasons, and therefore sent the letter demanding that Statfjord B should have its own living quarters platform.

This resulted in Statfjord B being constructed with a fire wall between the living quarters and the rest of the platform, which set a new safety standard for the shelf.

It also must be mentioned that construction of the Statfjord B platform was delayed by a year, that the price tag rose significantly and that production capacity dropped – and later rose again.

The NPD considers Statfjord to be a well-managed field, where solid reservoir work, efficient production drilling, very well-planned gas and water injection wells are key elements. Continuous maintenance and upgrades of drilling equipment for efficient drilling of production wells are also part of the success story.

Currently, production is well above the estimates from when the PDO for Statfjord Late Life was approved. This is the result of a lot of hard work.

Many skilled people have left their mark on Statfjord; from Statoil and the other licensees – as well as the authorities.

Though production from the Statfjord field is now one-eighth of what it was on that record day in 1987, the amounts generated are still vast – both for the owners and the public purse.

This is why the Statfjord field is the crown jewel of the Norwegian oil saga. 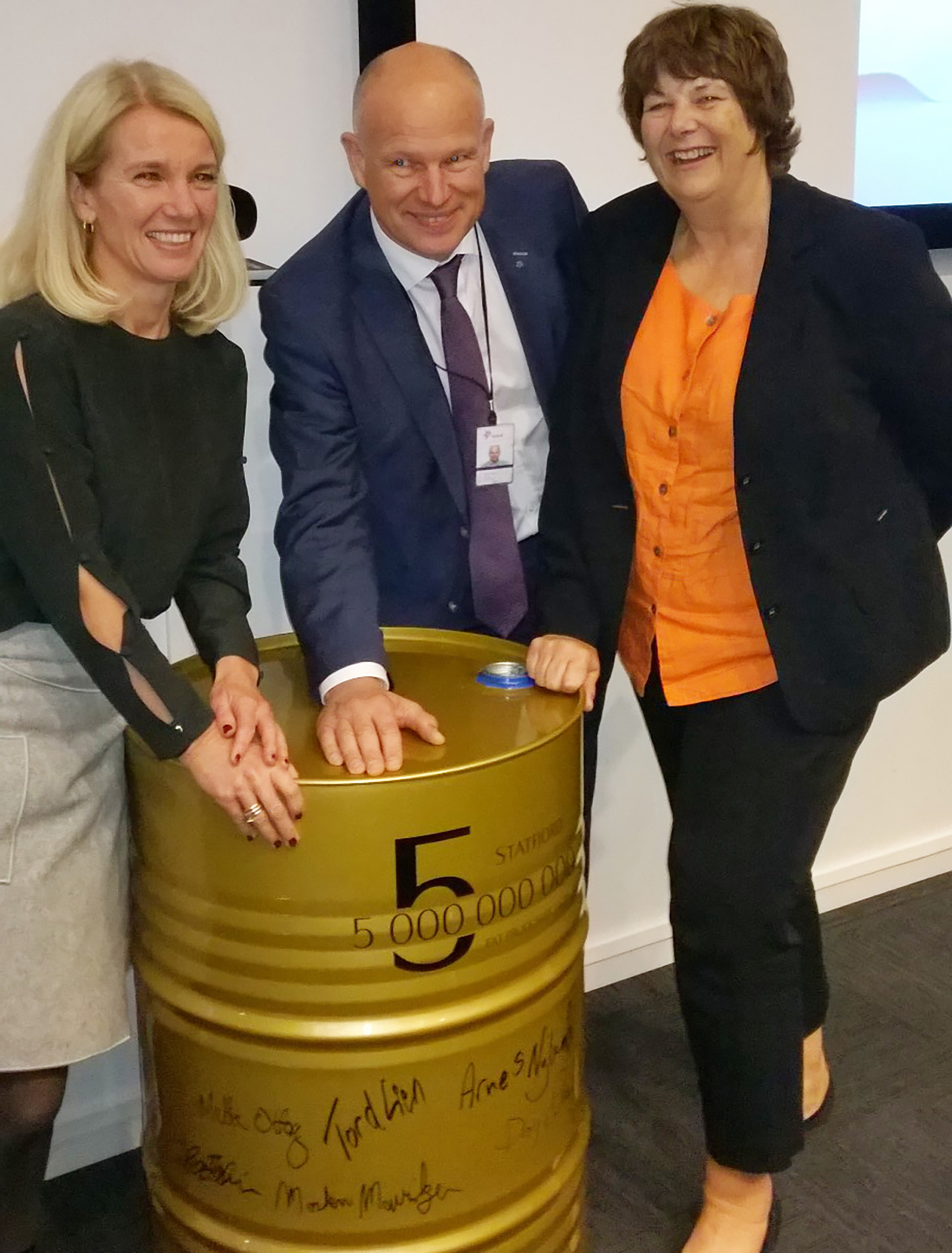