Mapping of the deep sea will continue

08/06/2016 This summer, the NPD will continue to acquire geological samples and deep-sea minerals in the Norwegian Sea.

The objective is to increase understanding of resources and the geological development of the North Atlantic.

The Norwegian Petroleum Directorate has dedicated resources to acquire seabed samples from the Vøring Spur in the summer of 2016. The project, which will be carried out by the University of Bergen (UiB), builds on a similar collaboration from 2010 to 2015.

Bathymetric data was collected by the NPD over Jan Mayen in 2010 (bathymetry is equivalent to topography, but describes conditions under water). Based on this, seabed material was collected using an ROV (remotely operated underwater vehicle) in this sea area in 2011 and 2012.

Several successful ROV dives were carried out in 2013, but now at the Gjallar Ridge South and the Vøring Spur in the Norwegian Sea. Among other things, material was collected at a depth of 3600 metres at the Vøring Spur. In 2014, the NPD acquired shallow drill cores in the outer parts of the Møre Basin. Figure 1 shows the areas that have been explored, and that will be further examined. 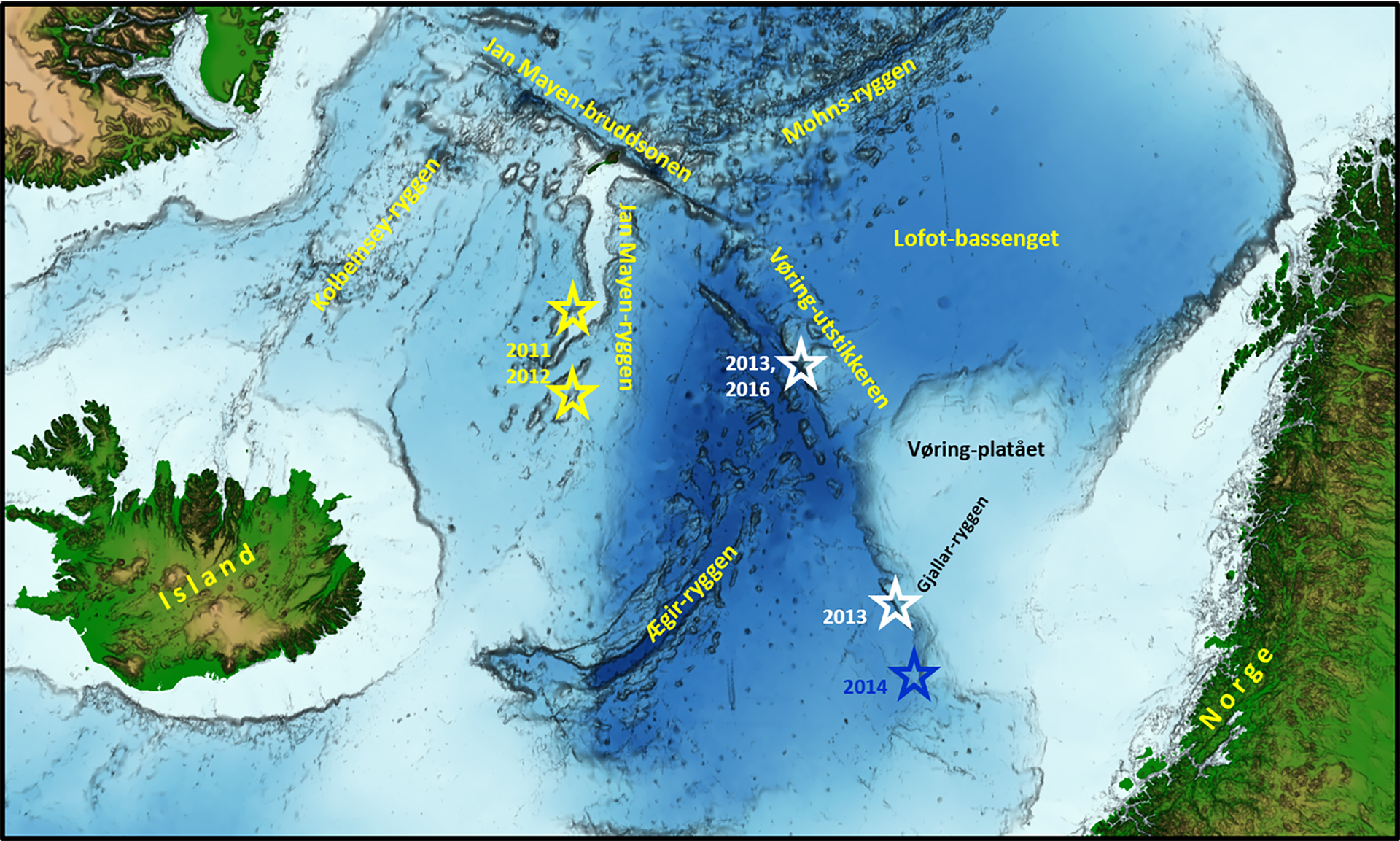 Figure 1. Map showing the locations of the Norwegian Petroleum Directorate’s sampling of bedrock on the seabed. The yellow stars show the locations for the sampling on the Jan Mayen Ridge with grab samples (2011) and chainsaw (2012). The blue star shows where shallow wells were drilled in 2014. The white stars show where samples were taken on the Gjallar Ridge and the Vøring Spur in 2013. Samples will also be taken here this year.

All of the samples have been collected as part of the exploration for reservoir rocks on the Jan Mayen Ridge, and the outermost parts of the continental shelf in the Norwegian Sea. Norway, Jan Mayen and Greenland were previously connected in the same continent.

About 60 million years ago, this continent split when the North Atlantic began to open up, and Norway and Greenland (together with the Jan Mayen Ridge) parted. Therefore, one would expect to find the same reservoir rocks in the Jan Mayen Ridge and outer parts of the Norwegian shelf that we currently see on land on the Greenland side from the time before and during the fracturing.

But the fracturing process itself was complicated. Finding out the details about how Greenland, the Jan Mayen Ridge and the Norwegian shelf were once all connected is quite a puzzle. Samples are being acquired to secure data points that can help solve this puzzle in the search for the types of reservoir rocks we see on Greenland.

The acquired samples have also provided very significant knowledge about metallic seabed minerals on the Norwegian shelf, an aspect that the NPD will pursue in the ongoing investigations. In addition to pure rock samples, samples of the manganese crust were also taken, both on the Jan Mayen Ridge and on the Vøring Spur. This is a coating of metallic minerals that are precipitated from the seawater on bare rock on the seabed. Such crusts are mainly composed of manganese and iron minerals, while other and far more valuable metals are also present, such as cobalt, nickel, titanium, platinum, scandium (used e.g. in aluminium alloys) as well as rare types of soil.

The content of these metals varies around the world, and they are currently attracting considerable international interest. Figure 2 shows one of the NPD's sampling locations on the Vøring Spur where a manganese crust has grown on the sheer rock face. UiB is in the process of completing a detailed geochemical study of the NPD's crust samples from the Jan Mayen Ridge. This will tell us which metals could be interesting resources in this area. The NPD and UiB will follow up with further studies of such manganese crust occurrences.

The NPD has also made its bathymetric data (depth data) available for studies of the Mohns Ridge. This is the mid-oceanic spreading ridge which is situated from Jan Mayen to Bjørnøya. Such spreading ridges are volcanic and produce metallic sulphide minerals through so-called "black smokers". These deposits are now also the focus of worldwide financial interest. The most interesting metals in this context are copper, lead, zinc, gold and silver.

UiB has performed scientific surveys on the Mohns Ridge for several years, investigating the geological and biological processes in these volcanic systems. These surveys also form the foundation for the current knowledge about the metal resources that are located here. UiB and the NPD have generally mobilised their research and acquisition missions together in all parts of the Norwegian Sea.

The Norwegian University of Science and Technology (NTNU) will conduct its first mission this year to examine sulphide minerals on the Mohns Ridge, with a basis in the NPD’s bathymetric data and UiB’s numerous surveys throughout the years. This activity will largely be financed by the Research Council of Norway.

During UiB's mission, the NPD will perform further investigations of the Vøring Spur. Based on experience from previous missions, we expect to find basalt, rocks with thick manganese crusts, as well as pure sediment samples. The material will help increase the authorities’ understanding of the resources in the Norwegian Sea and the geological development of the North Atlantic.

The metallic components that can be found in manganese crusts could become an important deep sea resource. In this year’s acquisition, the NPD will achieve a better foundation for conducting further mapping of the metal occurrences with regard to scope, quality and resource estimation. 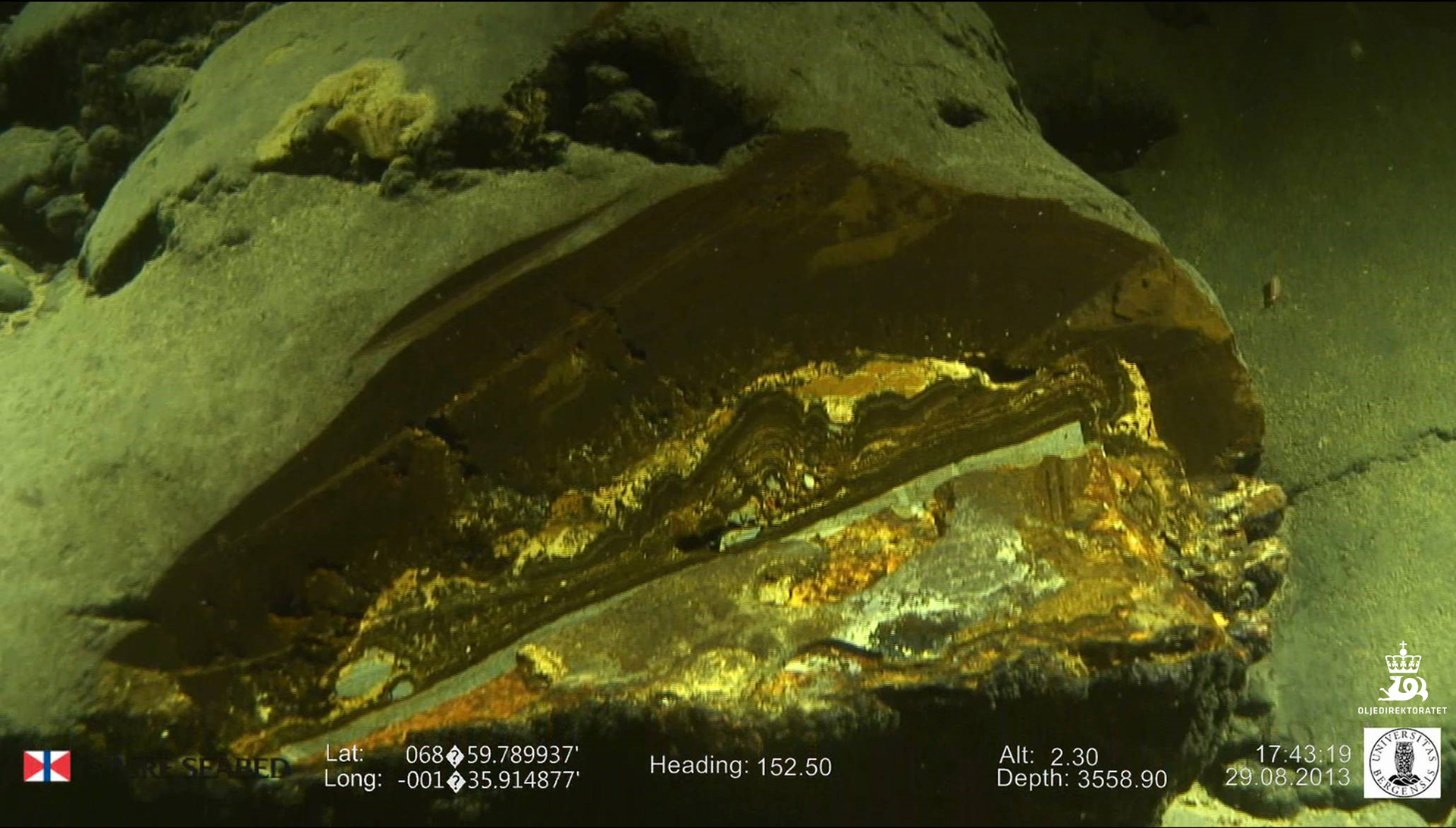 Figure 2. Sample location showing the manganese crust on the Vøring Spur, where a sample was collected in 2013.

The sample was taken using the same method as on the Jan Mayen Ridge in 2012 shown in this video: