ROV expedition in deep water in the Norwegian Sea

14/07/2016 The Norwegian Petroleum Directorate (NPD) has carried out 4 successful ROV (remotely operated underwater vehicle) dives and has acquired depth data (bathymetry) near the Vøring Spur in the western Norwegian Sea.

This year's expedition resulted in more than 100 kg of samples from the deep water seabed. The deepest completed ROV dive was 3570 m.

The operations were conducted by the Centre for Deep Sea Research at the University of Bergen (UiB), and were based on similar partnerships between the NPD and UiB - for example at the Vøring Spur and the Gjallar Ridge in 2013. The Vøring Spur is a subsea ridge located in the central Norwegian Sea, and knowledge about the subsurface from this ridge will provide more information concerning the opening of the North Atlantic (Figure 1). 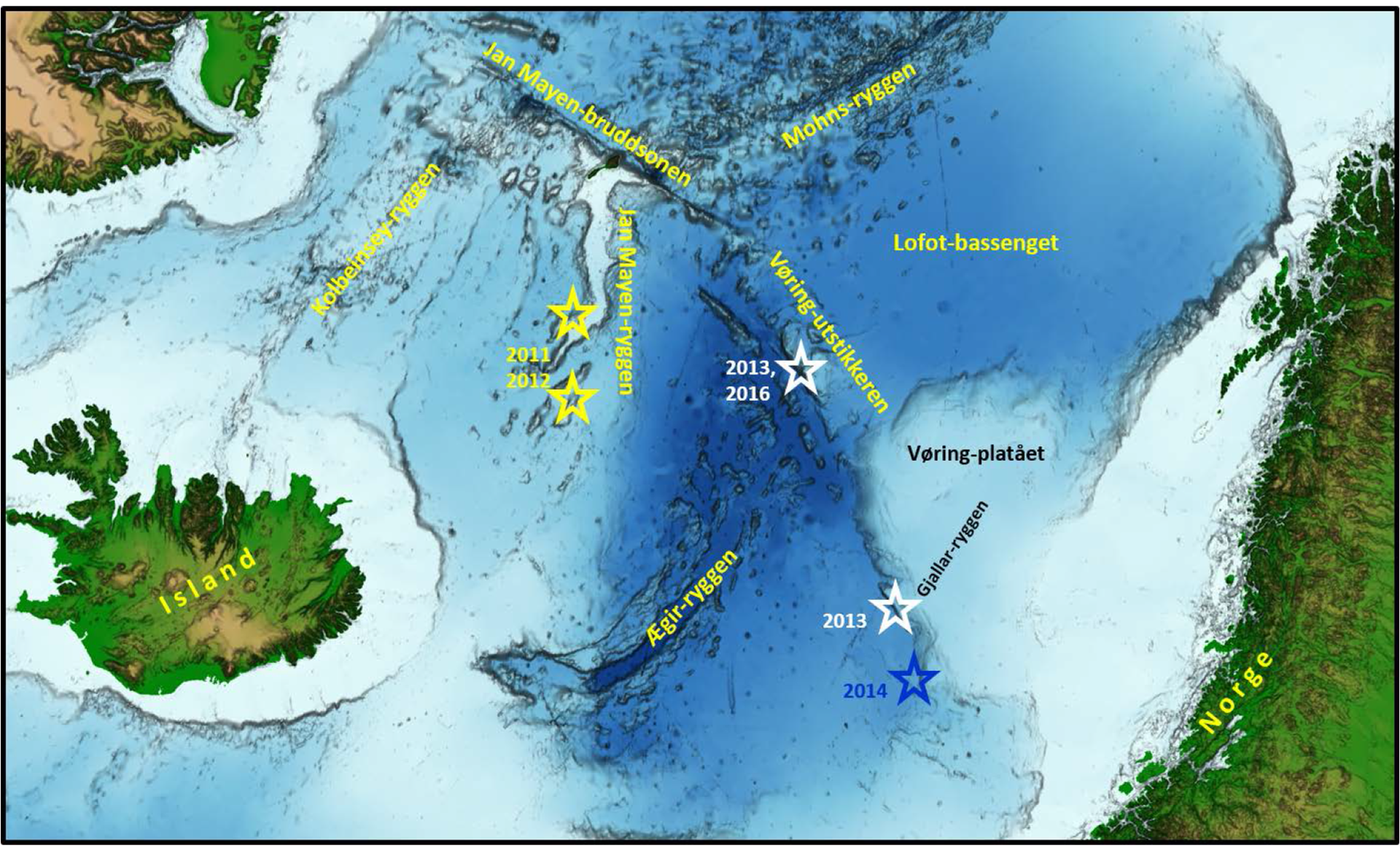 Figure 1. Maps showing the localities of the Norwegian Petroleum Directorate's sampling of solid rock on the seabed. The yellow stars show the sampling sites on the Jan Mayen Ridge with a grab (2011) and chain saw (2012). The blue star shows where shallow wells were drilled in 2014. The white stars show where samples were taken on the Gjallar Ridge and the Vøring Spur in 2013 and during this year's operations.

The NPD funds UiB's annual expeditions to the Mohns Ridge, and therefore had available operating time at the Vøring Spur. The primary objective of this year's operations at the Vøring Spur was to acquire bathymetry, collect local rock samples from exposed rock and collect manganese crusts. In spite of somewhat adverse weather, UiB conducted data acquisition as planned, and the expedition will now continue with exploration of the Mohns Ridge further northwest in the Norwegian Sea. The collected materials will arrive in Bergen in late July/early August, and the NPD will then initiate analyses and examinations of the unique data points from the Vøring Spur. Preliminary results indicate that the samples consist of silt and sandstone, in addition to certain substantial local deposits of manganese crusts. The materials will be included in the NPD's knowledge base concerning the subsurface and deep water metals, which has been accumulated over time.