12/01/2017 The petroleum industry’s effort to reduce costs, along with falling supplier prices, have resulted in a considerably lower cost level. This is reflected both in lower investments in new projects, reduced costs for new production wells on fields in operation, as well as reduced operating and exploration costs.

Controlling cost development is a precondition for future profitable activity on the shelf. This presumes that the reductions are not merely short-term measures, but that they safeguard considerations for long-term value creation, for health, safety and the environment, and ensure that the supplier industry is competitive and ready to participate when activity on the shelf picks up again.

There is little doubt that 2017 will be yet another demanding year for the industry. Although investments are still falling, the decline is slowing. Investments are expected to rise gradually following a minor drop from 2017 to 2018. The drop in investments is partially due to lower activity, but is also a consequence of the reduced cost level. The start-up of a number of new projects, both on fields currently in operation as well as new field developments, is expected to contribute to greater investments starting in 2019.

Operating and exploration costs will also be further reduced from 2016 to 2017, followed by levelling out and a gradual increase.

The cost-cutting efforts are now yielding results, but this has been challenging, particularly for parts of the supplier industry, where many people have lost their jobs. Development costs for a number of projects, both ongoing developments and projects under evaluation, have been significantly reduced. The primary causes of this are changes in development solutions, optimisation and efficiency measures, as well as lower prices in various supplier markets.

A rough indicator of cost level development is a comparison of construction costs on a selection of seven field development projects.* In 2014, the operators’ projected total investments for these projects were slightly less than NOK 220 billion (Figure 1-1). The equivalent projection for the autumn of 2016 was NOK 110 billion, i.e. a 50 per cent reduction. Recoverable resources for these projects remain virtually unchanged. The greatest cost reduction is for new facilities and development wells. More optimised solutions and simpler designs for both facilities and wells, as well as more efficient implementation, have yielded considerable cost reductions. This is in addition to the effects of lower supplier prices.

The reduction in costs is of great significance for the projects' profitability. As regards the included projects, the main picture is a break-even price of less than USD 40, and for some less than 30. For some projects, break-even prices have been reduced by more than half. 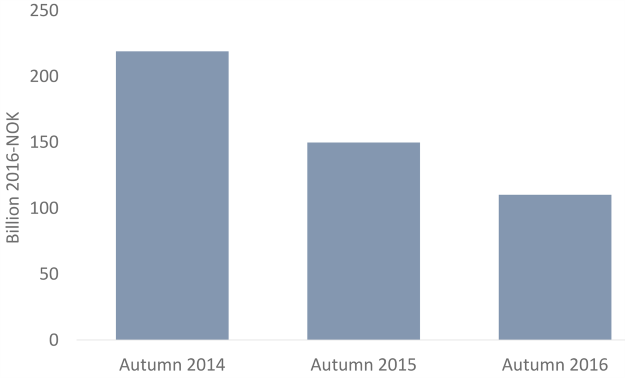 A lower cost level is also an important reason for the reduction in investments on fields in operation. Simplified well design and faster drilling and completion have, for example, led to a substantial reduction in costs per development well. The same number of wells can be drilled at a substantially lower cost.

A gradually rising oil price in the times ahead forms the basis for the NPD's forecasts. This is expected to yield a gradual increase in activity, and thus gradual growth in supplier prices. However, it is presumed that the share of the cost level reduction that is due to various optimisation and efficiency measures is realised both in ongoing and future projects.

A reduced cost level lays the foundation for increased profitability in both existing and new projects, and is an important prerequisite for future profitable activity on the shelf. Nevertheless, the focus on short-term cost reductions and capital discipline must not come at the expense of long-term value creation, including a robust and viable supplier industry and high standards for health, safety and the environment.

Measures that yield lasting cost reductions and that safeguard high HSE standards are essential in this regard. This requires a competitive supplier industry when the activity once again starts to grow. 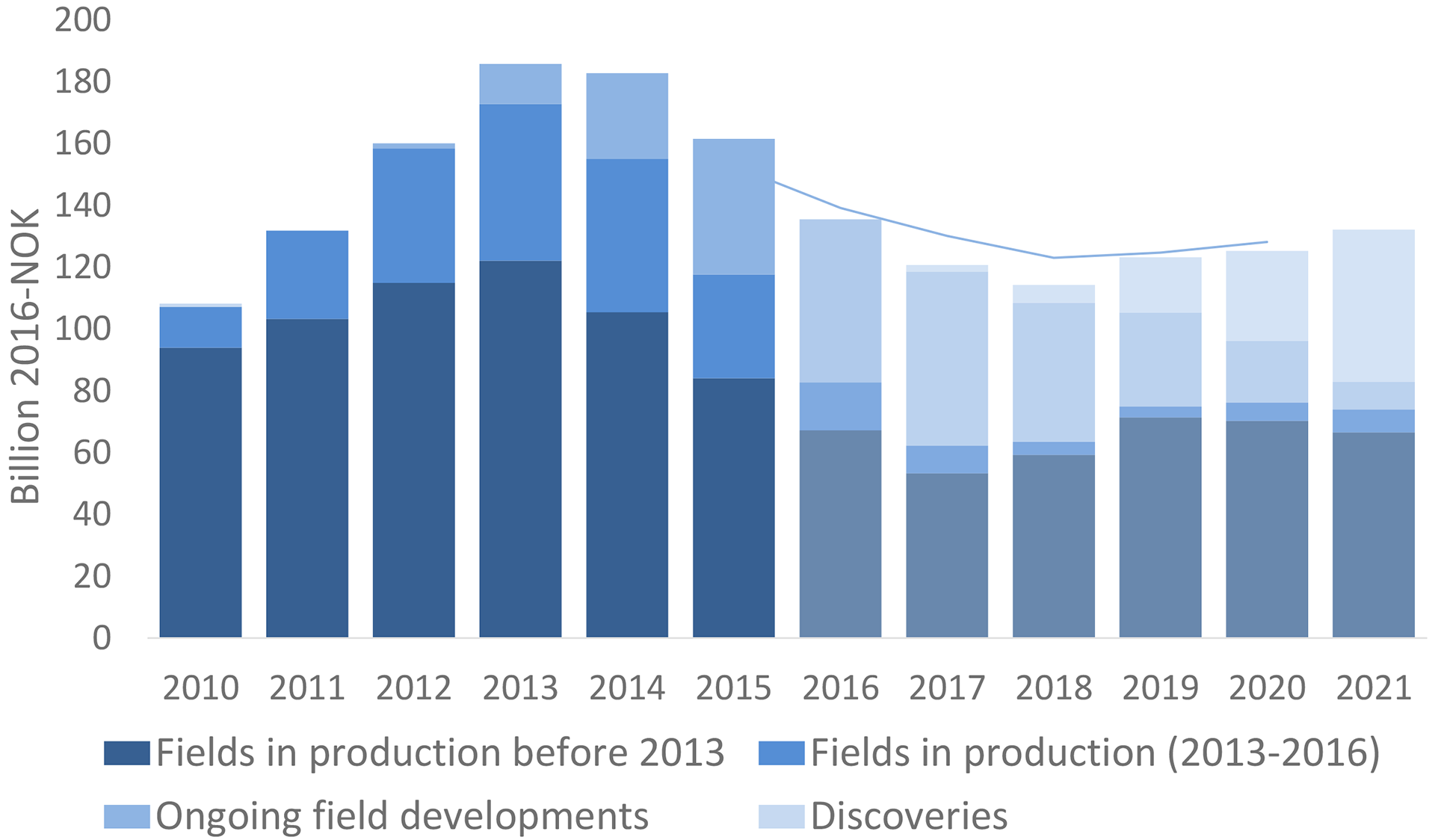 Investments in existing fields account for a substantial share of overall investments. Following the peak in 2013, investments in operating fields have declined considerably. One important reason for this is that certain major field projects have been finalised or are in a decommissioning phase, without equivalent new, major projects being started.

The decline in investments in the next few years is also linked to completion of several fields that have recently come on stream, as well as a number of major ongoing field developments approaching production start-up. Goliat and Ivar Aasen came on stream in 2016. Gina Krog, Aasta Hansteen, Martin Linge and phase 1 of Johan Sverdrup, will come on stream in the next couple of years. This is in addition to completion of the ongoing and planned seabed developments Maria, Utgard, Byrding, Dvalin, Trestakk and Oda. Investments for 2017 in ongoing field developments are estimated to be approx. NOK 55 billion, and will then decline rapidly as these fields come on stream. 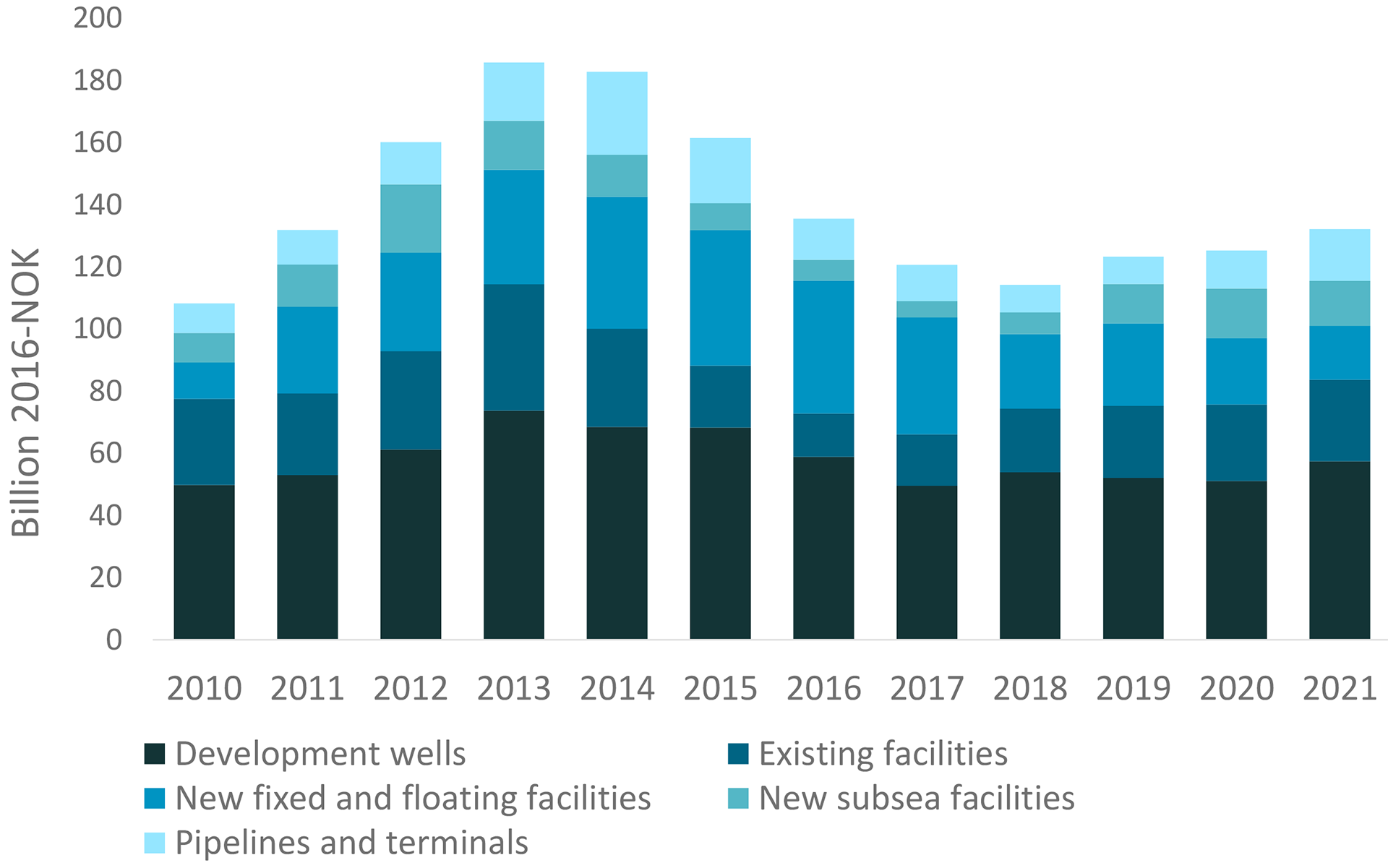 Many new development projects are under evaluation. In addition to projects on operating fields, the Johan Sverdrup phase II is included. There is also a considerable portfolio of new field developments for which a decision is expected over the next few years. Examples here include Johan Castberg, Snilehorn, Pil, Snefrid North and Skarfjell. The total investment projection for new development projects for which PDO submission is expected in 2017 and 2018 is NOK 175 billion (Figure 1‑4 ). Overall, this contributes to a moderate increase in investments starting from 2018. 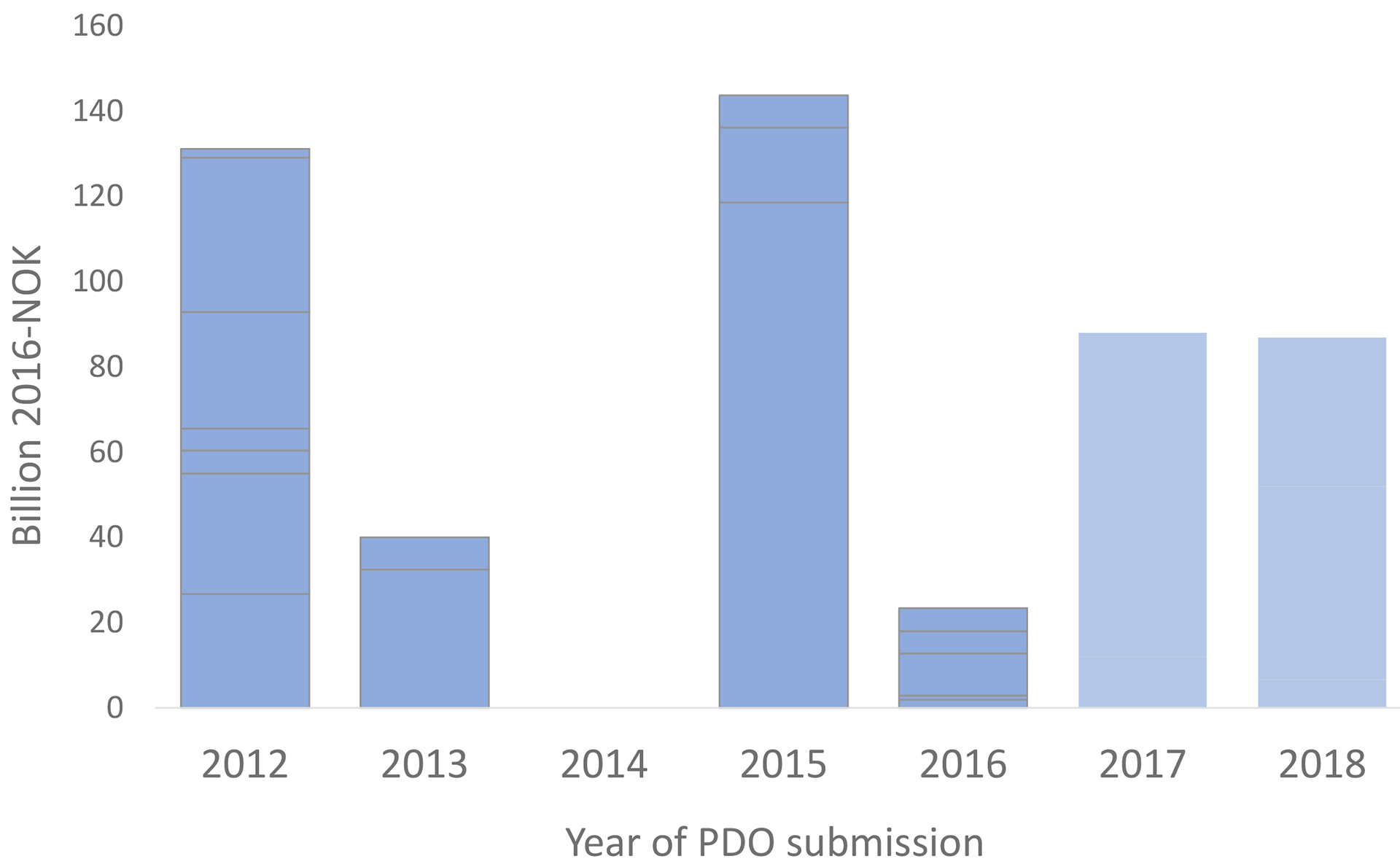 Figure 1‑4: Total investments in new field development projects, grouped by submission year for the Plan for Development and Operations (PDO)

In addition to a reduction in the number of major projects, considerable reductions in the cost level for ongoing and new projects are also an important cause of declining investments leading up to 2018. A good example here is the drilling of development wells. In spite of a considerable drop in investments in new development wells (Figure 1‑3 ), there has been no decline in the number of new development wells compared to the level in 2013 and 2014. The important causes of this are changes in well design and various efficiency measures that have yielded quicker drilling and completion of wells, as well as the effects of lower supplier prices. This has resulted in lower costs per well. 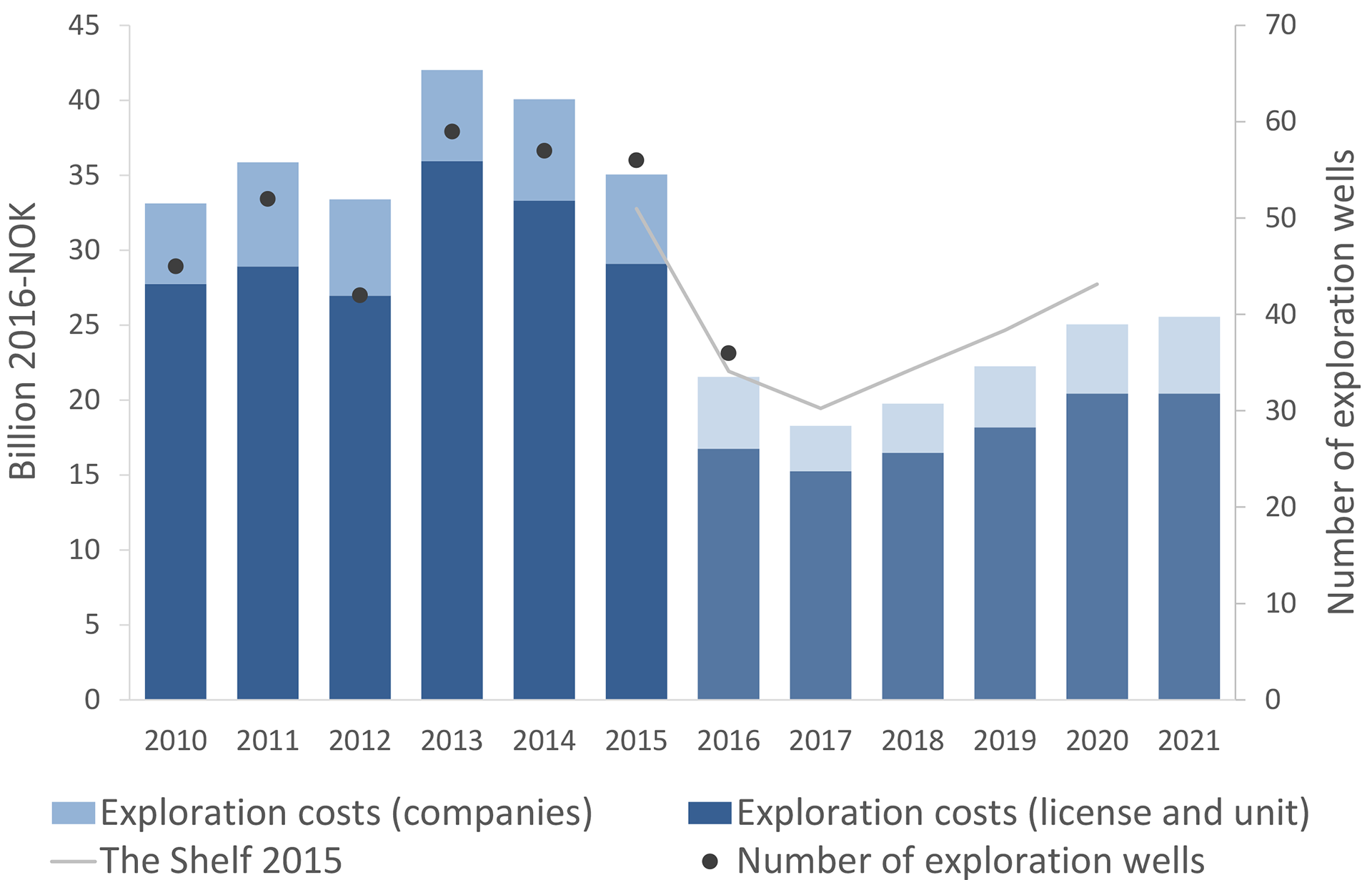 At the end of 2016, 80 fields were in production. Together, ordinary operating costs and maintenance of facilities account for a majority of the operating costs.

Figure 1‑7  shows the development in operating costs for a selection of fields that came on stream prior to 2013. Fields scheduled for shutdown leading up to 2021 have been excluded. As regards the remaining fields that are planning production throughout the period, the overall estimated operating cost level in 2018 is 30 per cent lower than in 2014. We see a particular decline in operating costs linked to various maintenance activities and other operating and support activities such as licence administration and business development.

The reduction is due to a goal-oriented effort from the operators to lower operating costs of fields through various efficiency measures. The measures are included in cost prognoses for the fields as they become concrete. In addition to the lower cost level, this also reflects deferred activity, based on the companies' assessments of which activities must be carried out now - and which can be postponed. Once the activities are eventually implemented, this will result in an increase in operating costs. New fields will also gradually come on stream and contribute to increased operating costs at the end of the period. 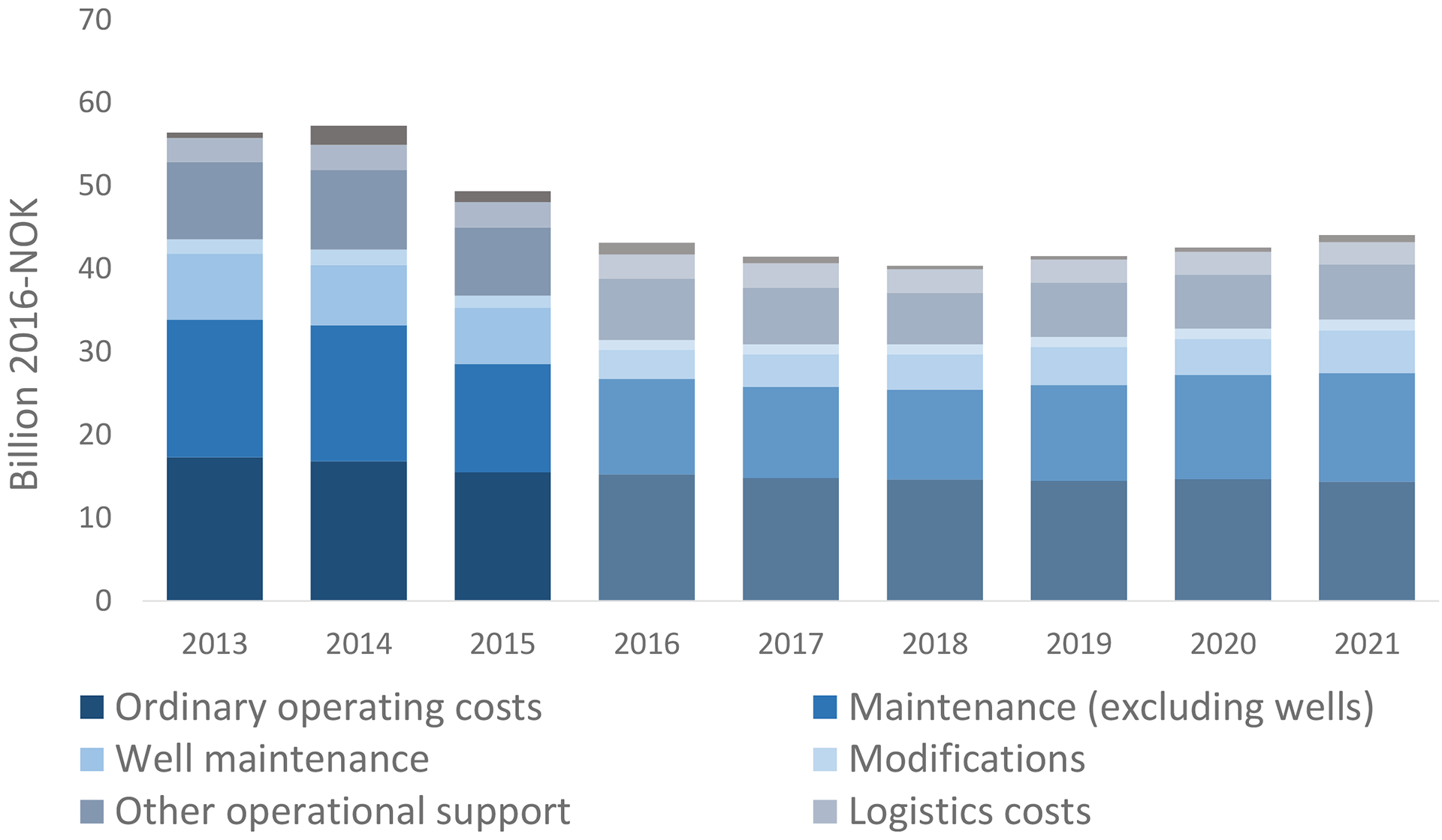 The operating cost prognosis (Figure 1‑6 ) is clearly lower than the prognosis presented in the Shelf in 2015. The primary reason for this is that the effects of various efficiency measures and lower supplier prices will now, to a greater extent, be incorporated into the prognosis.

Figure 1‑8 shows an overall prognosis for investments, operating costs, exploration costs, concept studies, shutdown and disposal on the Norwegian shelf. The decline from 2016 to 2017 in all included cost categories, is estimated at about 12 per cent. 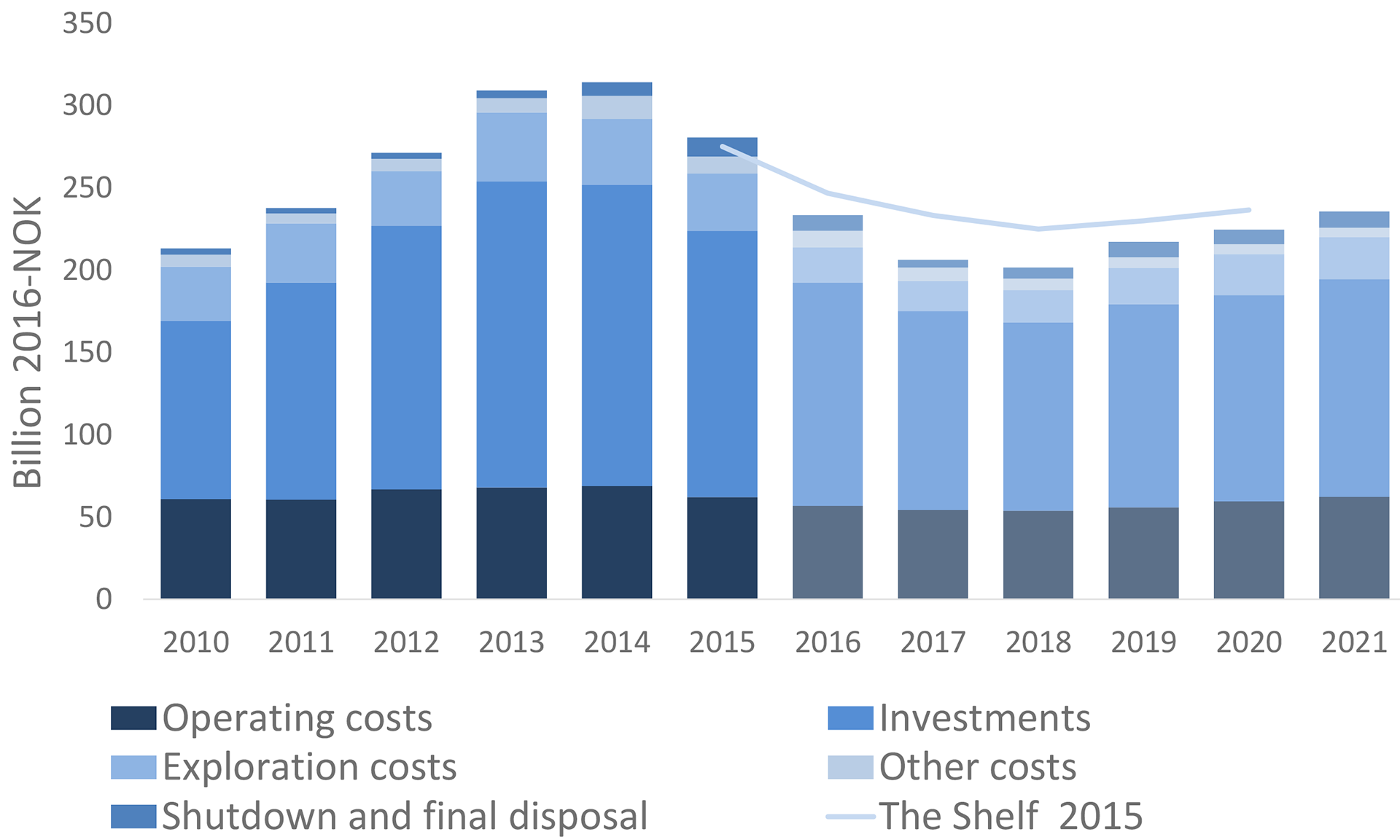