Many, but small discoveries

After several years of high exploration activity, 36 exploration wells were drilled in 2016, 20 fewer than the preceding year. This is mainly due to a lower oil price and cost cuts.

When the oil companies have to improve cash flow, exploration investments are usually impacted first. This is because exploration expenses can more easily be suspended or adjusted along the way than expenses that are linked to fields in operation and approved development projects. This development is not unique to Norway, but is rather part of an international trend that follows from the companies' adaptations to a situation with lower oil prices.

Historically, in times such as these, oil companies are more cautious and prioritise exploration in familiar/mature areas where discoveries are more likely – but often small discoveries – where the resource potential is high, but the probability of discovery is lower. 2016 has therefore seen considerable exploration in areas near existing fields, and many, but smaller discoveries have been made. 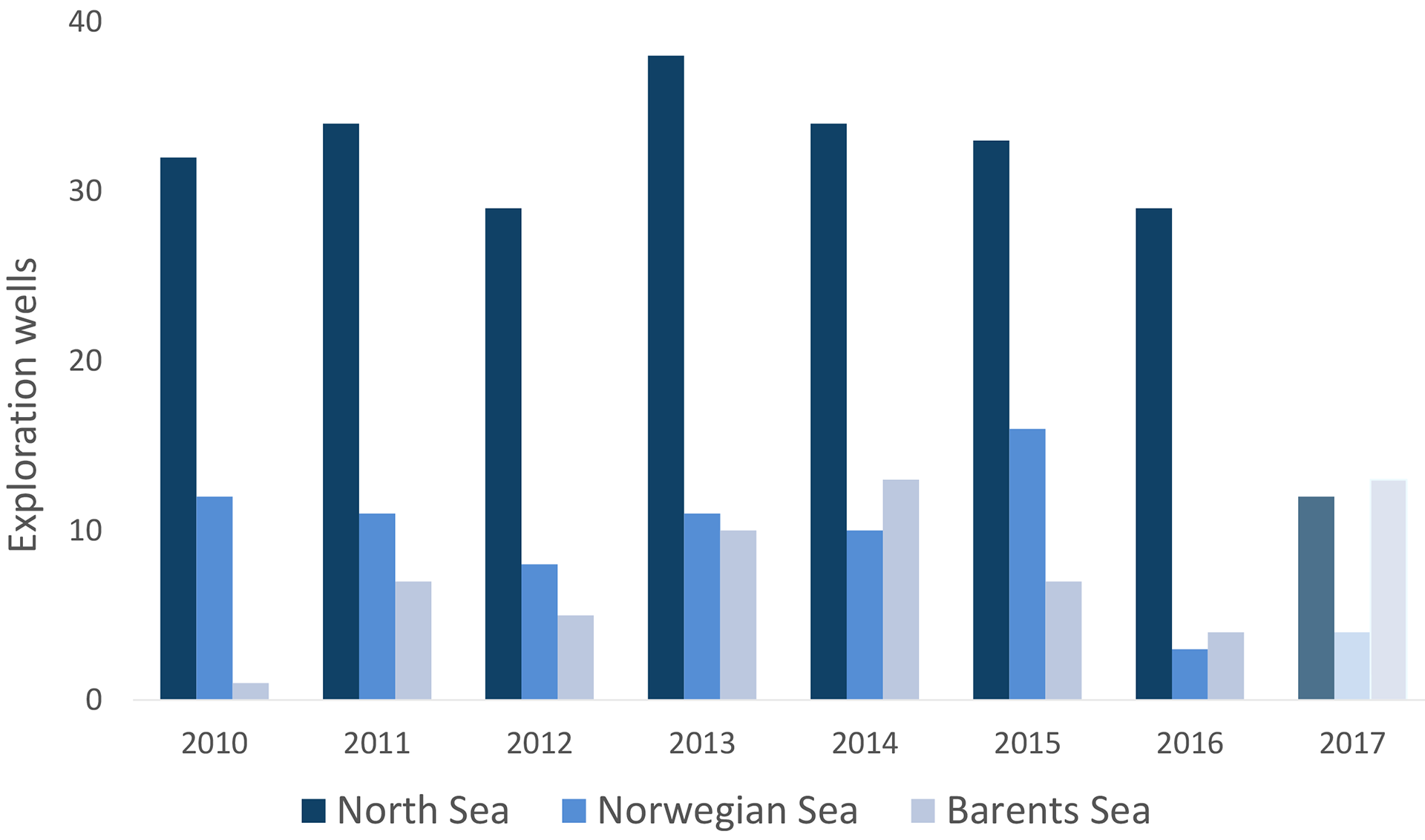 Most discoveries are located near existing infrastructure and can quickly become profitable developments if they are tied into fields and facilities in operation. Resources in the new discoveries amount to between 18 and 44 million standard cubic meters (Sm³) of recoverable oil and between 12 and 33 billion Sm³ of recoverable gas.

Around 30 wells are expected to be drilled in 2017, a relatively high number in a historical perspective. However, the decline in the number of exploration wells is cause for concern. In order to maintain oil and gas production beyond 2025, new profitable resources must be proven. See Figure 3-2. High exploration activity is therefore important.

Good access to data, consistent access to attractive acreage and stable framework conditions are the authorities' contribution toward maintaining a high level of exploration activity.

Although a decline in the number of exploration wells is expected in 2017, the number of applications and awards in the most recent licensing rounds shows that there is still considerable interest in the Norwegian shelf. In addition, several of the planned wells in 2017 have high potential and substantial geological information value.

There has been a stable, high level of awards of new production licenses in recent years, including in APA 2015 and the 23rd licensing round. The interest in APA 2016 was on a par with previous years.

2016 was the 50th anniversary of the first wildcat well being drilled in the North Sea. After such a long time and many wells, it is gratifying to see that discoveries are still made in the area.

The oil company Det norske (now Aker BP) proved oil in wildcat well 25/2-18 S (Langfjellet). The discovery was delineated with wells 25/2-18 A and 25/2-18 B. The preliminary estimate of the size of the discovery is between 3.8 and 12 million Sm³ of recoverable oil. This makes the discovery one of the year's largest.

Northeast of the Martin Linge field, Total has proven gas and condensate in wildcat well 30/4-3 S (Herja). The discovery has been estimated at 2.0-12 million Sm³ of recoverable oil equivalents. The resources will be produced from Martin Linge when the field starts up.

West of Oseberg, Statoil made a minor gas discovery in wildcat well 30/9-28 S (B-Vest). The discovery is estimated to contain between 1.2 and 1.7 million Sm³ of recoverable oil equivalents.

South of the Brage field, Faroe made an oil and gas discovery in wildcat well 31/7-1 (Brasse), which was delineated by 31/7-1 A. So far, the discovery is estimated to contain between 8.1 and 15 million Sm³ of recoverable oil equivalents and the reservoir quality is good. 31/7-1 was thus among last year’s largest discoveries. The licensees will consider tie-in to existing infrastructure on the Brage field.

The oil and gas discovery in wildcat well 36/7-4 (Cara) was also one of the largest last year, and is estimated at between 4.5 and 12 million Sm³ of recoverable oil equivalents. The discovery was made by Engie, and has good reservoir properties.

The Norwegian Sea has seen little exploration in 2016, but an increase is expected in 2017. Among other things, a wildcat well will be drilled in deep water, which may provide additional resources for the Aasta Hansteen discovery.

The Barents Sea has also seen relatively few exploration wells drilled in 2016 with few and small discoveries. Several appraisal wells were drilled on the Alta discovery and Wisting discovery, which have significance for further activity in the area. The appraisal well on Wisting was a successful test of how it is possible to drill horizontally in very shallow reservoirs. This is important knowledge as some exploration wells in the Barents Sea explore shallow exploration targets.

Lundin proved gas in the Barents Sea in wildcat well 7130/4-1 (Ørnen), and the size is estimated at 0.4-1.5 million Sm³ of recoverable oil equivalents.

Lundin has also proved oil and gas in wildcat well 7220/6-2 R (Neiden) east of the Johan Castberg discovery. The discovery has so far been estimated at 4-9 million Sm³ of recoverable oil equivalents.

In order to increase geological understanding on both sides of the demarcation line in the Barents Sea, a cooperation agreement was signed last summer with Russia concerning exchange of seismic data. This is important for further exploration of the Barents Sea.