Despite difficult times, considerable values are still being created on the Norwegian shelf. Five Plans for Development and Operation (PDOs) were submitted over the course of the year, with total investments valued at NOK 23 billion. There are also seven ongoing new field development projects with a total PDO investment estimate of NOK 233 billion.

The costs related to development and operation projects have been reduced by 30-50 per cent over the last few years. This contributes to increased profitability. However, it is important to make sure that cost reductions do not have an adverse impact on future value creation possibilities.

In recent years, the Norwegian Petroleum Directorate has seen that companies are increasingly emphasising short-term profits when deciding to invest in development of discoveries and in measures for improved recovery from fields. This is why it is important to shift the attention towards solutions that generate the highest overall value creation, also for our society – and which safeguard future opportunities for improved recovery from the fields.

It is very positive that the same number of development wells are being drilled as in 2013/2014, which is when the oil price was at its highest. Many plans are progressing well, which leads to new developments.

Following a period with an exceedingly high cost level on the Norwegian shelf, the industry has successfully cut costs in development projects by 30 to 50 per cent over the last few years. This should mean that companies will see more projects as profitable. It can be challenging to push through large and small investment decisions in the production licences based on requirements for short-term returns, or due to capital constraints in the companies. A lot of time may pass from investment to returns in an industry with a time horizon as long as the petroleum industry. The authorities are concerned with ensuring companies choose solutions that, overall, provide maximum value creation, and emphasise that it is important to maintain a long-term perspective rather than seeing what will provide the highest returns in the short-term.

The cost reduction work must lead to a lasting lower cost level on the Norwegian shelf. At the same time, this cannot have an adverse impact on future possibilities for improving recovery and facilitating optimal area solutions across production licences.

On the whole, the companies are doing a good job. However, the Norwegian Petroleum Directorate sees that it is occasionally necessary to exert some pressure to ensure decisions that will safeguard the values for society in the best possible manner. There is a good dialogue between the authorities and companies, and the Norwegian Petroleum Directorate's experience is that the companies do listen to signals from the authorities.

Two fields started producing in 2016, one Plan for Development and Operation (PDO) was approved and five new PDO applications were submitted. There are seven ongoing new field developments and five cessation plans were received.

The Goliat field in the Barents Sea finally started producing in March of 2016. Goliat is an oil field located about 50 kilometres southeast of the Snøhvit field. Goliat was developed with a floating, cylindrical production unit, including eight subsea templates with 32 well slots. Daily production capacity is nearly 16 000 standard cubic metres of oil equivalents (100 000 barrels o.e.). Goliat is expected to produce for at least 15 years. The lifetime can be extended if new discoveries are made in the area.

Production at Ivar Aasen started on Christmas Eve in 2016. The oil field is located about 30 kilometres south of Grane and Balder in the North Sea. The development solution consists of a production and living quarters facility with a steel jacket and a separate jack-up drilling facility. Daily production capacity is nearly 11 000 standard cubic metres of oil equivalents (68 000 barrels o.e.). Ivar Aasen is expected to produce for 20 years, depending on the oil price and production development.

Plans for Development and Operation (PDO)

One PDO was approved in 2016, for Oseberg Vestflanken 2 in the North Sea. The resources will be produced from an unmanned wellhead platform. The PDO estimates costs of the development at NOK 8.2 billion, and the investment will make it possible to recover 17.6 million Sm3 of oil equivalents (approx. 110 million barrels o.e.). Production start-up is scheduled for 2018. The development represents a new concept on the Norwegian shelf. Vestflanken 2 is the first of three planned phases for development of the remaining reserves in the Oseberg area. The remaining reserves for Oseberg, Oseberg South and Oseberg East are estimated at 135 million Sm3 of oil equivalents (850 million barrels o.e.). The project will help extend the lifetime of the Oseberg field, which has been producing since 1988.

The authorities received five PDOs in 2016. These five development plans represent a total investment of NOK 23 billion and a present value of NOK 35 billion before tax. 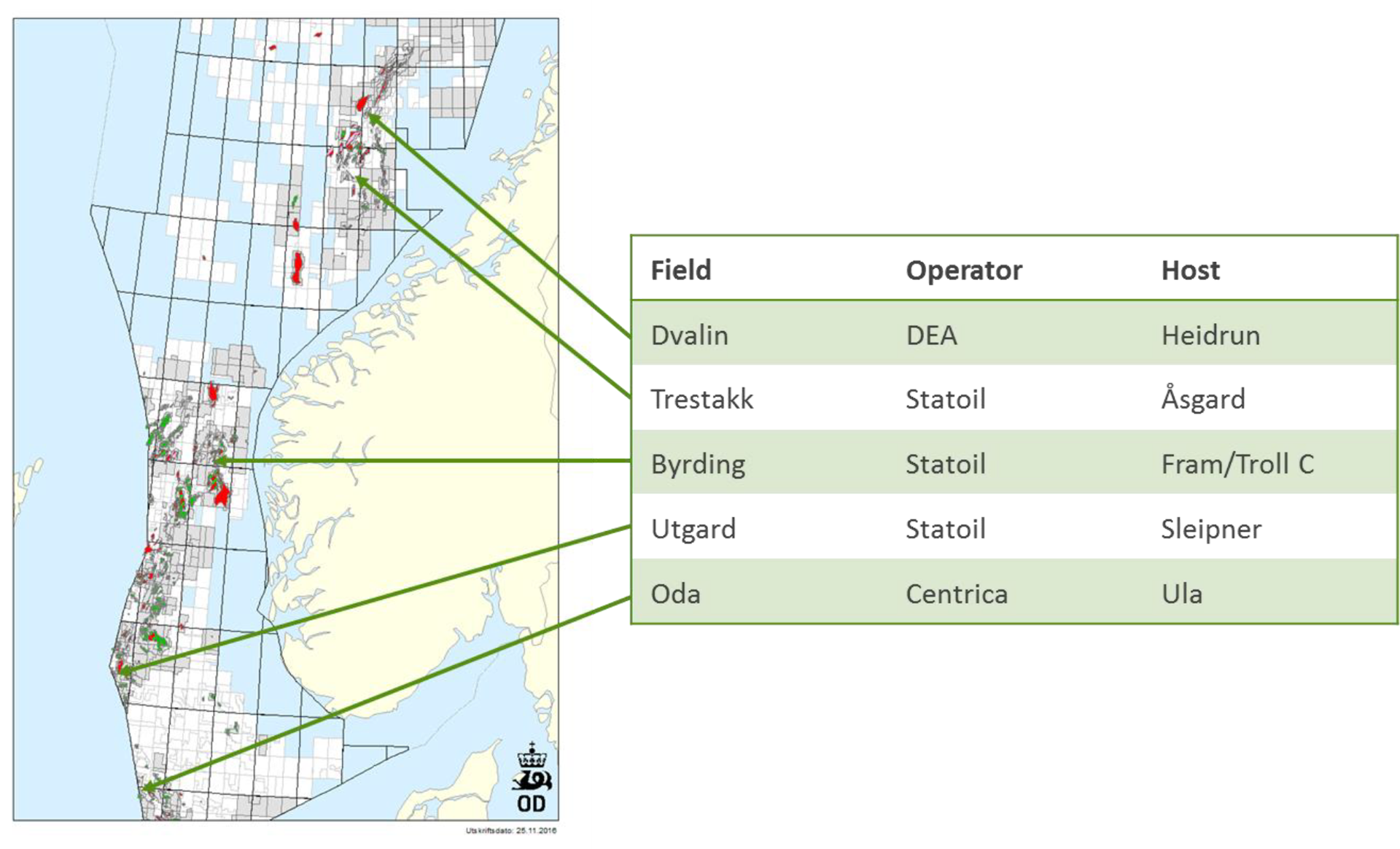 All of the fields will be tied in to existing infrastructure, and will contribute to the efficient exploitation of available capacity. This will also increase the profitability and lifetime for the relevant platforms that will be processing oil and gas from the new fields, and will also enable further measures that can contribute to extending tail production from these fields.

Utgard (15/8-1) is a gas and condensate discovery located west of the Sleipner area in the North Sea. The discovery spans across the Norway-UK continental shelf border, and is estimated to contain about nine million standard cubic metres of oil equivalents (57 million barrels o.e.). The majority of the reserves in Utgard are located on the Norwegian side. The development will be tied in to facilities on Sleipner. The expected investment amounts to nearly NOK 1.9 billion (Norwegian share). Production start-up is scheduled for the 4th quarter of 2019. Statoil is the operator.

Byrding (35/11-13) is an oil and gas discovery located southwest of the Gjøa field in the North Sea. The discovery is estimated to contain about 1.8 million standard cubic metres of oil equivalents (11 million barrels o.e.), and will be developed using the existing subsea template in the Fram area. Production start-up is scheduled for the 2nd quarter of 2017. The expected investment amounts to nearly NOK 1 billion. Statoil is the operator.

Oda (8/10-4 S) is an oil discovery east of the Ula field in the North Sea. According to estimates, 7.5 million standard cubic metres of oil equivalents (48 million barrels o.e.) can be recovered from Oda. The investment for the development amounts to approx. NOK 5.4 billion. The field will be tied in to Ula and production is scheduled to start in the 3rd quarter of 2019. Centrica is the operator.

Dvalin (6507/7-14 S) is a gas discovery located near Heidrun in the Norwegian Sea. Estimated recoverable resources from the discovery are about 18 billion standard cubic metres of gas. The field will be tied in to Heidrun. Expected investments will exceed NOK 10 billion. Production start-up is scheduled for October 2020. DEA is the operator.

Trestakk (6406/3-2) is an oil discovery located near the Åsgard field in the Norwegian Sea. Recoverable resources are estimated at 10.5 million standard cubic metres of oil (72 million barrels). The field will be tied in to the Åsgard A platform. Expected investments amount to approx. NOK 5.5 billion. Statoil is the operator.

The NPD’s forecasts assume that about ten PDOs will be submitted over the next few years. PDOs for two major developments are expected in 2017, Johan Castberg in the Barents Sea and the further development of the Snorre field in the North Sea. The PDO for Johan Sverdrup Phase II is expected in 2018, and PDOs for several other development projects are also anticipated.

A milestone was achieved in late November/early December 2016, when the licensees for the Snorre field in the North Sea decided to continue the project that will significantly increase production. The field was proven in 1979 and production started in 1992. The licensees are planning to submit a Plan for Development and Operation in 2017.

The new development consists of six new subsea templates tied in to the two existing platforms. The expansion will increase recovery from the field by nearly 30 million standard cubic metres of oil. This is equivalent to the size of the Goliat field in the Barents Sea, which makes Snorre the largest improved recovery project on a producing field. The lifetime of the field will be extended to 2040.

Johan Sverdrup is located south of Grane and northeast of Sleipner in the North Sea. The development solution in phase one is a field centre with four specialised platforms: living quarters, process facility, drilling facility and a riser platform that was built to receive electricity from shore. The oil will be transported through a pipeline to the Mongstad terminal located north of Bergen. The gas will be transported through a pipeline to the Kårstø terminal north of Stavanger. Production start-up for Phase I is scheduled for late-2019.

Gina Krog is an oil and gas field that is located northwest of Sleipner in the North Sea. The development solution is a new steel platform and a storage ship, as well as a jack-up drilling facility. Planned start-up is 2017.

Hanz is an oil field in the North Sea. It is being developed with a subsea template that is tied in to the Ivar Aasen field and the wellstream will be transported on to the Edvard Grieg field for final processing and export. The schedule for development and production start-up depends on available processing capacity.

Maria is located on Haltenbanken in the Norwegian Sea. Maria will be developed with a subsea production facility with two subsea templates. The development will have several “hosts”. The wellstream will be routed to the Kristin platform for processing and metering. The oil is then sent to Åsgard A for storage and offloading to shuttle tankers. The rich gas will be exported via the Åsgard transport pipeline system to the gas facility at Kårstø in Rogaland County. Gas for injection in the Maria field comes from the Åsgard B platform. The gas arrives via the gas pipeline to the Tyrihans D subsea template on the Tyrihans field. The Maria pipeline will be connected here. Water to be injected for pressure support in Maria will be delivered from the Heidrun platform. Production start-up is scheduled for late-2018.

Martin Linge is located near the UK sector border, west of the Oseberg field in the North Sea. Martin Linge will be developed with an integrated fixed production platform with a steel jacket and a floating storage and offloading unit. The wells will be drilled by a jack-up drilling facility. Start-up is scheduled for late-2017.

Aasta Hansteen is located in the Norwegian Sea, west of Bodø in Nordland County. The field will be developed with a floating Spar platform, and two subsea templates. Gas from Aasta Hansteen and other discoveries in the area will be transported in the Polarled pipeline to Nyhamna in Møre og Romsdal. Production start-up is scheduled for late-2018.

Flyndre is an oil field in the Ekofisk area in the North Sea. The field is located on the border between the UK and Norwegian shelf, and will be developed by connecting a horizontal subsea well on the UK shelf to the Clyde facility. The majority of the resources are located in the UK sector. Production start-up is scheduled for 2017.

Four fields, all of which are located in the North Sea, were shut down in 2016: Varg, Volve, Jette and Jotun. Parts of the Jotun field, Jotun A/FPSO will still be used in operation of the Ringhorne and Balder fields.

In 2016, the authorities received cessation plans for an additional three fields or facilities, also all located in the North Sea: Oselvar, Gyda and the old living quarters platform on Valhall.

In 2016, the Ministry of Petroleum and Energy made disposal decisions for the following facilities: Varg, Skirne, Atla, Ekofisk 2/4 C and Tor 2/4 E, Jette and Jotun.