The Ministry of Petroleum and Energy has announced the 23 rd licensing round today, 20 January 2015. Fifty-seven blocks/parts of blocks are being announced in this round, of which three are in the Norwegian Sea and 54 in the Barents Sea.

When the nomination deadline expired on 14 January 2014, 40 companies had nominated a total of 160 blocks or parts of blocks for the 23rd licensing round. Eighty-six of these were nominated by two or more companies.

“The interest in exploration in the Barents Sea has increased significantly following the exciting discoveries in recent years; 7324/8-1 (Wisting), 7120/1-3 (Gotha) and 7220/11-1 (Alta). It is fifty years since the government announced the first licensing round on the Norwegian continental shelf. With that hindsight the new areas in the southeast Barents Sea are particularly interesting. These are areas which are hitherto unexplored. This could open up a new petroleum province in the Barents Sea. This licensing round helps keep the activity level high, but we must also prioritise step-by-step exploration in the new areas,” says Sissel Eriksen, exploration director in the Norwegian Petroleum Directorate.

The application deadline is 2 December 2015 at 1200 hours. The government aims to award new production licences in the first half of 2016. 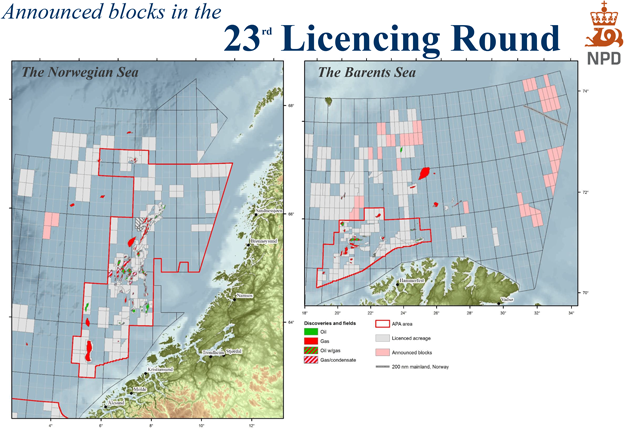 Forms that must be completed:

Table 5 should also be included in the written application (3.2.2).

The forms ApplicationData, CompanyInformation and ProspectData must be downloaded after 17.02.15.

New developments for the 23rd round

As for APA 2014, please submit all tables requested for the applications gathered in three excel sheets. The excel sheets are electronically read in the NPD’s database. It is therefore not possible to format the excel forms beyond adding new rows at the bottom. Files delivered in the incorrect format will be returned to the companies.

In the excel sheet “ApplicationData”, the blocks being applied for must be selected from a drop-down menu. One block name in each cell. Please note that all blocks in the APA area are in the drop-down list, including those already covered by a licence.