The Ministry of Petroleum and Energy has 17th March 2016 announced the APA 2016, comprising the predefined areas with blocks in the North Sea, the Norwegian Sea and the Barents Sea.

The predefined areas (APA boxes) have been extended with more blocks since APA 2015. The new areas include 24 blocks in the Norwegian Sea and 32 blocks in the Barent Sea. Applications can be submitted for any blocks or parts of blocks within the predefined areas that are not already included in a licence three months before the closing date for application. This entails that acreage which is relinquished in the application period is regarded as announced at the time of governmental approved relinquishment. The acreage will be included consecutively in the predefined areas on NPD's interactive fact maps until 06. June 2016, three months before the closing date for application, see links below.

Map showing available acreage within predefined areas at the time of announcement: 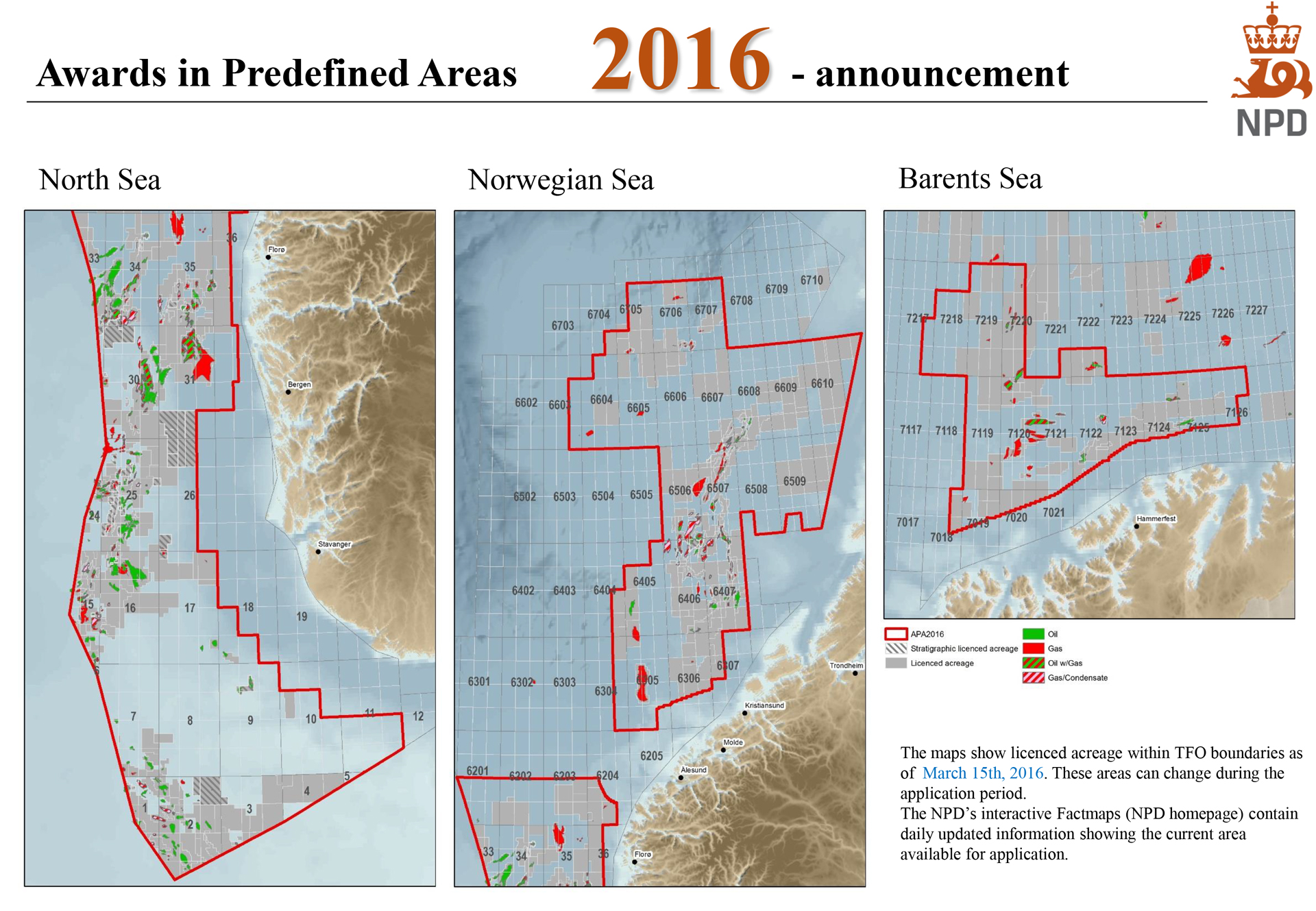 Each company applying for APA 2016 shall submit the following to the authorities:

1. Application letter and information about company

An application fee of NOK 123.000 is due upon submission of each APA 2016 application, including applications for additional acreage. Payment shall be made to the Norwegian Petroleum Directorate, account no.: 7694.05.00326 and marked ”APA2016_(block no.)”. Copy of receipt must be included in the company application letter.

Tables to be included in application:

Number of pages and illustrations in the applications

We would like to emphasize that the number of pages and illustrations specified for the individual chapters are to be considered as guiding. Additional text and/or illustrations/tables are allowed if necessary. If you are uncertain in this regard, please do not hesitate to contact us.

Please note that the «ApplicationData» and «CompanyInformation» tables have been corrected and updated with a number of previously missing block numbers 03.06.2016

Applications are submitted both on paper and electronically on a memory stick to the NPD. Files on the memory stick must be delivered in the specified format and size, and must be structured and named in accordance with the guidelines.

All information (including application letter, company information and actual application) to be submitted to the Ministry of Petroleum and Energy must only be sent electronically.

The total size of the application must not exceed 400 MB.

In addition to the list of wells, it is now specified that the NPD would like a short statement regarding the choice of any key wells.

A separate ProspectData document should be filled out for each prospect.

A work program is required for additional acreage when the existing production licence has no remaining work commitment that includes exploration/drilling of the prospect applied for.

As in APA 2015, all worksheets are compiled in three Excel workbooks. The Excel workbooks are uploaded electronically to the NPD’s database for APA rounds. Therefore, applicants are not allowed to change the Excel format other than to add new rows at the bottom of the worksheets. Files submitted in the wrong format will be returned to the companies.

The APA acreage will be updated until 3 months before application deadline.